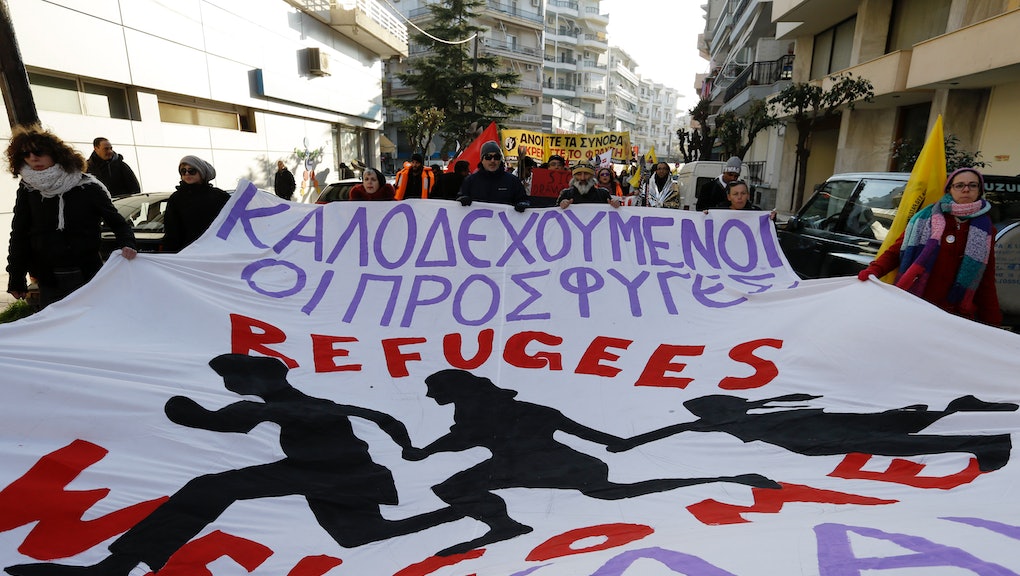 There’s a Solution to the Refugee Crisis, But No One Is Talking About It

DAVOS, Switzerland — If 2015 was the year the Syrian refugee crisis entered mainstream public consciousness in the West, 2016 could be the year it unravels into a full-blown social and political catastrophe — if policymakers don't deal with the problem head on.

That's one of the core messages that came out of this year's World Economic Forum Annual Meeting in Davos, where global terrorism and the migration crisis took center stage.

But while refugees may have been top of mind for this year's impressive gathering of world politicians, business executives, tech entrepreneurs and media executives, concrete solutions to the crisis have been much harder to come by.

"Everyone is worried about refugees, but no one knows what to do," Ian Bremmer, author and president of the Eurasia Group, told Mic. "I'm not hearing anything about solutions."

During a plenary session on Wednesday afternoon, German President Joachim Gauck told participants that the German government is "extremely likely" to introduce measures to limit the numbers of refugees entering Germany this year, after the country accepted an estimated 1 million refugees in 2015.

While keeping refugees out of Germany may serve to temporarily stem the tide of the crisis, however, Bremmer said measures like this will do little to address the conflict's root causes.

Drawing a direct comparison to America's failed war on drugs, Bremmer emphasized that world leaders will need to adopt a more holistic approach if they are going to actually solve this crisis.

"In America, we had a war on drugs that did not accomplish a lot, because Americans were dealing with everything but the actual problem," Bremmer told Mic. "Similarly, right now, you have across the Middle East tens of millions of young, disenfranchised Islamic men who have a demand for a sense of mission. There aren't a lot of options for them. Al-Qaida, ISIS and Boko Haram have proved to be by far the most compelling. Unless that is changed, you cannot resolve the refugee problem."

For this reason, Bremmer says there's one key to permanently solving the refugee crisis, and it rests with Arab governments.

"The regimes they are living in are unsustainable, and they must reform to provide these young men and women with careers and livelihood," Bremmer told Mic.

Toward a permanent solution: One world leader who intimately understands this dynamic is David Miliband, president and CEO of the International Rescue Committee, who told Mic his organization is focused on both easing the short-term problem by providing emergency assistance to refugees entering Europe, while also addressing the crisis' root causes.

"You must address the root causes and deal with the symptoms," Miliband told Mic. "2016 has got to be the year when we start catching up with the problem. We're still playing catch up."

In his conversations with world leaders here in Davos, Miliband said he is emphasizing that government, business and civil society will need to collaborate more closely on four areas: protection for civilians living inside Syria; economic opportunity for refugees in neighboring Arab countries like Jordan and Lebanon; the establishment of a legal route for refugees to enter Europe; and more coordination amongst European governments.

But even then, Miliband echoed Bremmer, saying everything rests with how the war in Syria is resolved.

"People are chasing their tales," Miliband told Mic. "There has been no discussion of the war in Syria. Until there's discussion about that, we are always going to be playing catch up."

Inaction is not an option: So what can the United States and Western governments due to address the root causes of the crisis?

For one, Bremmer says the United States and Western governments must continue to pressure Arab governments to reform. In recent months, that view seems to be falling out of fashion as politicians like Republican presidential frontrunner Donald Trump have stated that the world would be "100%" better if brutal dictators like Saddam Hussein and Moammar Gadhafi were still in power.

According to Bremmer, that couldn't be further from the truth. "For people who say we just want dictatorships in the Middle East, that is an extremely short term strategy," Bremmer told Mic. "You better be pressuring them as hard as possible to create sustainability, because otherwise this region is all imploding."

Miliband and Bremmer also both pressed America to do more to resolve the problem.

"The political climate [around refugees in the United States] is noxious," Miliband told Mic. "[But the existing system of] biometric testing of refugees means you cannot become a refugee resettled into the U.S. unless you can prove you are who you say you are."

Bremmer had a similar message. "The Americans have been most effective at not making this our problem, and you're going to see more of that going forward from European governments," Bremmer told Mic.

"We need to make it our problem."