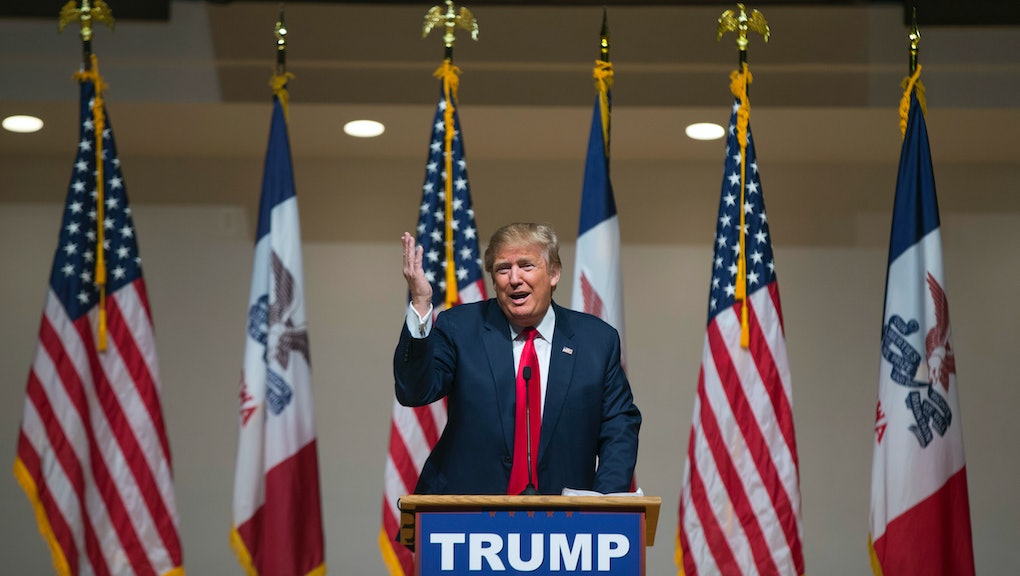 On Saturday, Republican presidential frontrunner and real-estate billionaire Donald Trump said his supporters are so loyal they'd literally let him get away with murder.

During a rally in Sioux Center, Iowa, Trump told the assembled crowd, "My people are so smart. And you know what else they say about my people? The polls — they say I have the most loyal people ... I could stand in the middle of Fifth Avenue and shoot somebody and I wouldn't lose any voters."

"They'd say, 'Trump, we love you too man,'" the candidate continued, to laughs from the audience, reported CNN. Afterward, he declined to elaborate on his remarks.

The joke won't sit well with some. The United States has the highest rate of gun violence among rich, developed countries and is the world leader in mass shootings, according to research released in October.

This is the second time in a little more than a month Trump has jokingly referred to murder — in December, the candidate assured reporters he had no intention of snuffing them out like Russian President Vladimir Putin.

But Trump's casual attitude towards violence might not just be a punchline. Trump supporters have repeatedly been filmed physically attacking undesired protesters at his rallies, sometimes with the candidate's apparent support.

"Maybe he should have been roughed up because it was absolutely disgusting what he was doing," Trump told Fox and Friends in November, after attendees at one of his rallies beat and kicked a black man there to protest the candidate.

Polling does back Trump's claim his supporters are loyal. An NBC News/Survey Monkey poll released on Jan. 5 found 51% of his supporters were "absolutely certain" they will vote for him. Meanwhile, the possibility of a Trump win has started to become accepted among Republican insiders, according to the Washington Post.

But imagine if Trump did indeed shoot and kill somebody in the middle of Fifth Avenue. Though that would likely damage his showings in the general election, there would technically be no prohibition on him serving as president, even if convicted, according to FactCheck.org.