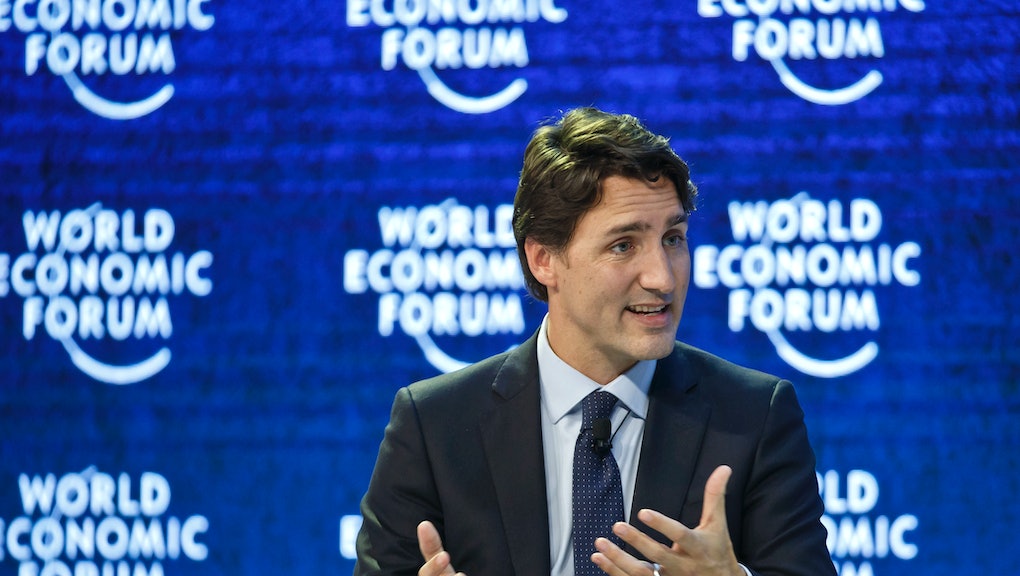 DAVOS, Switzerland — Of the many politicians attending this year's annual meeting of the World Economic Forum in Davos, Switzerland, there was one in particular who stood out as the most popular world leader for millennials: Canadian Prime Minister Justin Trudeau.

Since he was elected in October, Trudeau has become an international sensation. The internet has swooned over his dashing good looks. Feminists have praised his bold stances on gender equality and women's reproductive health. He's even been dubbed the next Barack Obama.

In Davos, Trudeau's rockstar status was on full display. Everywhere he went, Trudeau was swarmed by hordes of reporters, alongside crowds of googly eyed young people clamoring to take a selfie with the prime minister at every turn.

On Wednesday, Trudeau delivered a keynote address to a packed general audience in which he painted Canada as a dynamic country of innovation and opportunity. But it was during a closed-door session on Thursday with a room full of Global Shapers, a group of under-30 leaders from around the world, where Trudeau's unique appeal with millennials became evident.

Trudeau, who is only 44 years old — the second-youngest Canadian prime minister ever — opened up to the group about his worldview. What was most striking was the extent to which it squarely fits with the way millennials view the world.

Three areas, in particular, jumped out:

1. Profound focus on diversity and equality. Trudeau made news worldwide when he delivered on his promise to select a cabinet with equal gender representation, selecting 15 women out of his 30 new cabinet members. When he was asked why this was such a point of emphasis, Trudeau responded simply, "Because it's 2015."

Trudeau spoke extensively about that decision before the audience of Global Shapers, explaining his deeply held belief in the importance of diversity and gender equality.

"One of Canada's greatest sources of strength is our diversity," Trudeau said. "Having a group of extraordinarily diverse people who share a similar vision and a similar set of hopes and dreams is extraordinarily powerful."

Later, at a panel on gender equality, which also included Sheryl Sandberg and Melinda Gates, Trudeau went further, saying, "We shouldn't be afraid of the word 'feminist.' Men and women should use it to describe themselves anytime they want."

2. Explicit emphasis on re-engaging young people in politics. A recent Rock the Vote survey of millennial voters in the United States found millennials to be extremely skeptical about politics, with 55% saying there are better ways of making a difference than voting. Trudeau addressed this cynicism head on and pledged to overturn it.

"We have a vicious cycle in which politicians don't listen to young people, because young people don't vote," Trudeau said in Davos. "We are working very hard to make sure young people are included in the governance of our country."

Trudeau, who previously served as the Liberal Party's critic for youth and multiculturalism, discussed his decision to adopt Canada's Youth portfolio while forming his cabinet. "Youth portfolios are typically not considered important for politicians," Trudeau said. "So I said, 'Let me go to parliament and become the champion of youth.'"

Trudeau has also pledged to create a Youth Advisory Council, consisting of Canadians aged 16 to 24, and garnered praise for his efforts to use digital media to connect with youth voters.

3. Hopeful optimism despite chaos in the world. The same Rock the Vote survey found that despite their skepticism, 57% of millennials remain optimistic about the future, echoing other surveys that show 74% of millennials believe they will be as well or better off than their parents.

Against a backdrop in which most world leaders at Davos portended a gloomy future marred by slowing economic growth, war, and crisis on the issue of refugees, Trudeau showed quite the opposite. On the issue of refugees, Trudeau emphasized his deep commitment to openness and tolerance, which comes in stark contrast to what candidates like Republican frontrunner Donald Trump have said on the presidential campaign trail.

During his Wednesday  address, Trudeau told the audience, "I can't help but being tremendously optimistic," which prompted Quartz's Kevin Delaney to write that Trudeau must be the most optimistic man on Earth.

It's quite clear that Trudeau is leaving Davos with soaring expectations from millennials. Immediately after he concluded his remarks to the Global Shapers, Trudeau snapped a group selfie and was swarmed by the room.

But if President Barack Obama has shown anything, it is that millennial enthusiasm is difficult to sustain. There may indeed be wind at his back, but Trudeau will have to prove he can deliver.