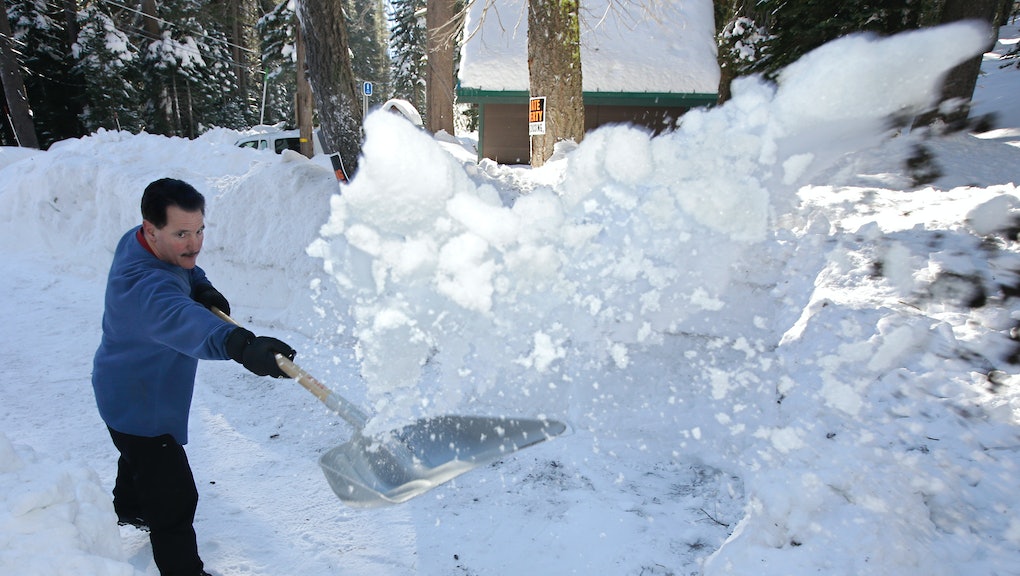 How to Shovel Snow Safely After Winter Storm Jonas

At least six deaths linked to Winter Storm Jonas were caused by shoveling snow, according to the New York Times. Three residents of New York City died with shovels in their hands, two men died from cardiac-related complications on Long Island, and a man died of a heart attack in Maryland while shoveling snow outside his home. All six individuals were over the age of 60.

"Shoveling snow has a number of health risks associated with it, including the most serious one — a heart attack," Martin Tirado, executive director of the Snow & Ice Management Association, told NJ.com. The group includes companies involved in plowing snow and removing snow and ice from shopping centers, apartment complexes, hospitals and other facilities.

Shoveling snow can be an exhausting activity. Here are some tips on how to stay safe while clearing out the snow.

The Snow and Ice Management Association recommends staying hydrated and taking frequent breaks while shoveling snow. Consider shoveling snow as an intense workout, one that would require you to drink water and take breaks. The snow isn't going anywhere, so don't try to tackle it all at once.

According to Today, shovelers should be aware of the signs of a potential heart attack, which include shortness of breath, increased sweating, tightness in the chest and an increased heart rate.

When dressing warmly, make sure that your mouth, ears and extremities are completely covered, in order to maintain body heat. Frostbite can occur in less than 30 minutes in extreme temperatures.

"If it is 28 or 30 degrees outside, it'll [frostbite] take longer," Dr. Jon Rittenberger, an associate professor of emergency medicine at the University of Pittsburgh School of Medicine, told Today. "Once you are wet, the water helps dissipate heat from the body even faster; that is the disadvantage of being out in the cold [snow]."

Stay ahead of the storm.

When a snowstorm hits, the Snow and Ice Management Association recommends that shovelers clear the snow every few inches, rather than waiting for the snowstorm to cease. Clearing the snow during the snowstorm can be less strenuous than having to shovel large amounts of snow at once.

Warm up your muscles by stretching.

Just like anyone should with any intense workout, take a few minutes to stretch before shoveling the snow. Stretching before shoveling will help prevent fatigue, injury, or worse. A few exercises to get the body prepared to shovel snow won't hurt.

Pushing snow aside rather than lifting it places less stress on your body, according to the Snow and Ice Management Association. Shovelers exert less energy when pushing, rather than trying to lift the snow.

The American Academy of Orthopaedic Surgeons informs shovelers that they should squat with legs apart, knees bent, back straight and lift with the legs. Bending at the back or waist can result in serious injury.

Watch what you consume.

The American Heart Association tells shovelers to avoid eating a large meal prior to or soon after shoveling because the large meal could put stress on your heart. Shovelers should also avoid picking up the bottle —drinking alcohol could increase a person's sensation of warmth, according to the Association. An increased sensation of warmth could confuse a shoveler into believing they aren't cold.