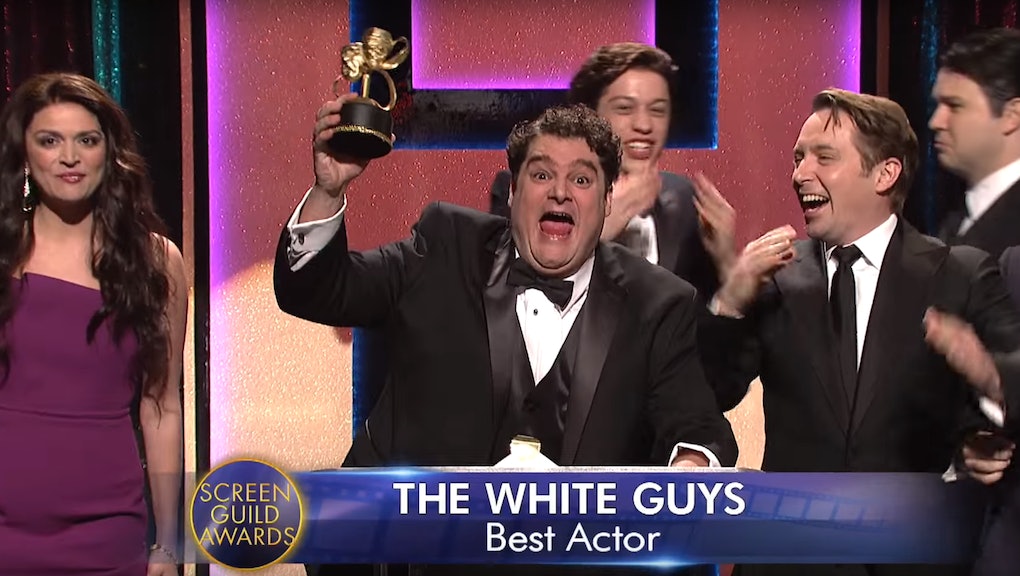 Saturday Night Live just slammed the Oscars, parodying this year's all-white slate of acting nominees with a sketch in which the fictional "Screen Guild Awards" honor white men for meaningless achievements on screen.

White dudes in increasingly marginal roles score all the nominations — from a librarian named Dave who cuts off Thurgood Marshall in the middle of a speech about racism, to a character titled "white man with camera" who walks into the middle of a movie about African warlords.

All the while, their black colleagues shoot them dagger-like glares.

In the end, all of the white people win — and isn't that nice?

The parody comes just days after the Academy of Motion Picture Arts and Sciences voted unanimously to make major changes to its voting membership, including ending lifetime membership and doubling the number of nonwhite and female members.

In recent weeks, a number of high-profile celebrities including Will and Jada Pinkett Smith, Michael Moore, Spike Lee and Snoop Dogg promised to boycott the upcoming Oscars over its second year in a row without any nonwhite nominees in the four acting categories.

According to the Economist, the whiteout is indeed as troubling as it looks at face value.

"The chances no single person of colour being nominated across two ceremonies would be exceptionally small — even during a 15-year span, the odds of seeing at least one sequence of back-to-back whiteouts are around one in 100,000," wrote the publication's Prospero blog.

However, it also pointed out that imbalances in the industry likely have more to do with widespread white over-representation within the film industry itself, rather than solely the Academy.

While the academy's decision to diversify its membership is welcome, it comes too late for this year's award ceremony, which will end by default in exactly the manner of this sketch.