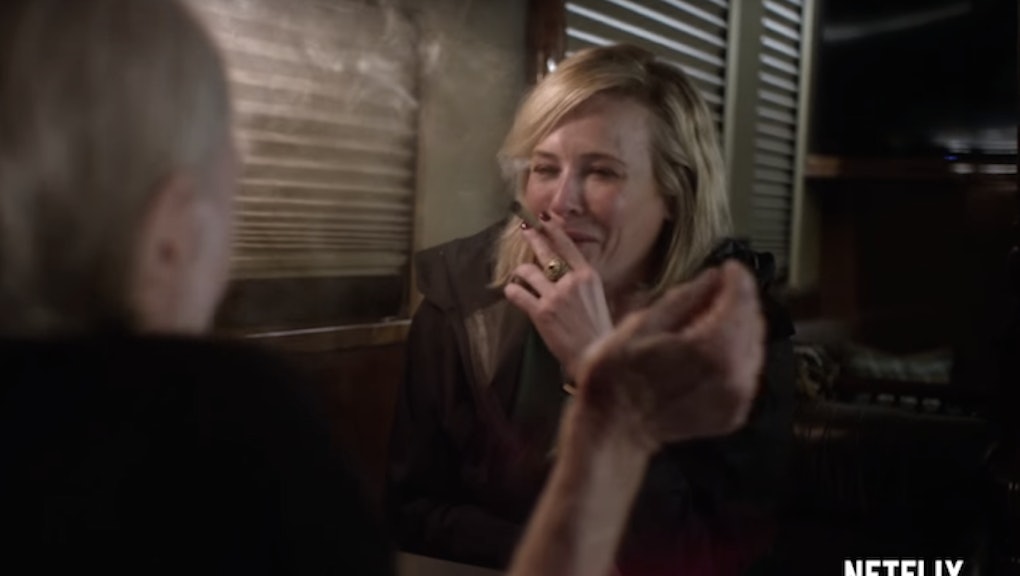 In the midst of one of the biggest snowstorms in recorded history, Netflix released the entire first season to Chelsea Handler's highly anticipated new four-part documentary, Chelsea Does. Each episode explores a different central theme throughout the 40-year-old standup comic's life, from a trip down the aisle as Handler covers the topics of dating and marriage, to a trip across the world in order to try a mind-bending drug called ayahuasca.

"Is that offensive to you, that black people like watermelon and fried chicken?" Handler asks Rev. Al Sharpton in the streaming show's fourth episode, "Chelsea Does Racism." "Yeah, 'cause I'm a vegetarian," Sharpton immediately replies.

Similar off-the-cuff banter is displayed throughout much of the first season, as the comedian and producer meets with several nonprofits and organizations like the NAACP and the Anti-Defamation League to hash out some of her most famous jokes, as well as the former late night host's thoughts regarding racism and the need to make fun of stereotypes.

Any fan of Handler's knows of the comic's fondness for marijuana — she's made it a point in several of her books, TV shows and standup specials to make clear she's very 420-friendly — and Chelsea Does is no different. In "Chelsea Does Drugs," Handler has a several-course dinner in her backyard with comedian friends, including Fortune Feimster, who gets incredibly stoned from the THC-filled entrees.

As the crew sits back, drinking wine and eating marijuana delicatessens prepared by Handler's private chef, the famed ayahuasca drug is brought up. Handler reveals the documentary will follow her and two friends throughout their journey to try the drug, known to cause life-changing effects on those who take it — as well as diarrhea and vomiting.

The episode then focuses on Handler's trip to take ayahuasca, flying with her two friends to Peru to try the coveted drug, which a number of celebrities have tried before her. "I want to show people what happens when you get fucked up. I'm going to Peru to do ayahuasca," Handler states during the first preview for Chelsea Does. "It's supposed to be one of those transformative experiences; people say it changes their life."

After Handler's first night of trying ayahuasca ends with her coddling her friend as she cries and another has a negative trip, she schedules a private night with a shaman to try the drug by herself, and after vomiting several times, it's clear Handler experiences the drug as it is meant to be used.

Oh and the weed smoking? Handler covers the topic ad nauseam, smoking with musician Woody Allen and exploring the booming growth of the cannabis market.

Handler shows a candid side of herself, admitting while she's transitioning from late-night TV hosting on a major national network to online video, she doesn't have a clue what "streaming" even means. "Chelsea Does Silicon Valley" shows the comedian visiting California's tech-prominent region, meeting with Netflix's CEO to discuss her new role in the streaming service — as well as learn about their "algorithms," after learning what an algorithm is, first — and trying some of the latest gadgets being produced in the valley.

It's a side of the late-night comedian, producer and actress fans have yet to see. Similarly, it's Handler's introduction to the world of online comedy, and the audiences whom she will be getting closer with as the years go on.