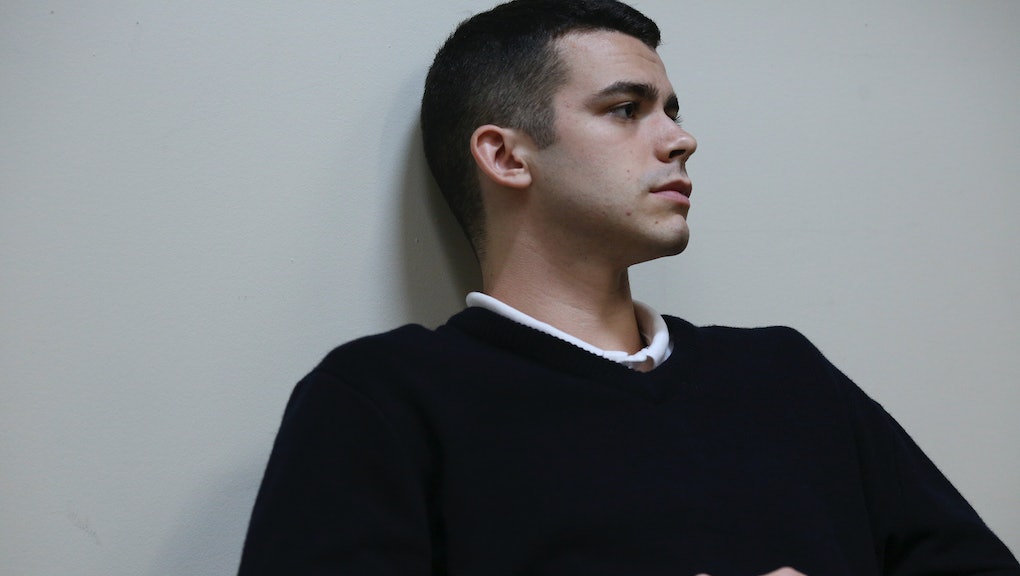 American Crime is breaking every boundary this season. The ABC drama is not only telling a story about male rape — an intense, sensitive subject with layers of complexity to dig through — it's not afraid of making that story even trickier. Creator John Ridley is crafting a rich, intricate story that never feels impenetrable, and filling it with some of the most interesting characters on any television show this year.

Spoilers for the series' second season from here on out.

Wednesday night's episode introduced a new wrinkle into the story of Taylor (Connor Jessup) and Eric (Joey Pollari), two high school boys shaken to their cores by a party gone wrong. Taylor says he was sexually assaulted at the party. It turns out basketball captain Eric is the suspect. However, Eric doesn't cop to a crime — he admits to going to the party with the intention of having consensual sex with Taylor. He has the messages to prove it.

The ways the audience learns of the boys' sexuality are heartbreaking, each in different fashion. Eric tries to kill himself out of fears that his being gay would end his basketball career. Taylor gets found out through his messages with Eric, deeply embarrassing his girlfriend Evy (Angelique Rivera) in the process.

Compare Taylor and Eric to Glee's Kurt, a character who is consistently made a martyr in the early seasons of his show. One particularly stunning sequence from the show's second season involved the main cast stopping a wedding reception to sing Bruno Mars' "Just the Way You Are" at him. The motivation? Kurt was bullied. Instead of giving the character inner strength, he's victimized and made to look weak.

Taylor is a victim, yes, but not because he's gay, and his victimhood doesn't rob him of his personal strength. He's been assaulted, and he's petrified of what that will mean. Will people believe his story? Will they discount his claims because he's gay? He's a teen who tried to explore who he is and winds up hurt and humiliated. His mom is conservative — what will she do if he tells her the truth?

Like anyone in his shoes would be, Taylor is paralyzed by fear. It's heartbreaking, and nearly perfectly rendered in both writing and in Jessup's masterfully nuanced performance.

Yet American Crime succeeds because it refuses to use this revelation as a twist that clears Eric of the crime, or to paint Taylor as a manipulative gay teen. The truth came out as Taylor answered his mom's questions about whether he went to the party to have sex with Eric.

"I didn't go there to get attacked," he insists. There's the key: Eric says Taylor wanted it. Taylor holds firm he was assaulted. Suddenly, what was a whodunit trying to determine who the rapist is becomes a far more complicated question: Where does consent begin and end?

"I didn't rape him," Eric says in the preview for next week's episode. "I did what he wanted."

Sexuality is not an excuse for rape. Being gay is not an automatic sign of consent in a male-on-male sexual assault. That's the message American Crime is sending. It may sound elementary, but it's actually deeply transgressive in a society where harmful messages about men "wanting it" prevail. Using gay teen characters to break down these stereotypes and tell such an intricate story is a brave choice on Ridley's part.

Both Eric and Taylor are deeply flawed people, as immature as real teens are. They aren't wholly positive depictions of gay boys — certainly not if it turns out Eric did indeed attack Taylor. But their characterization is just as complex as the other characters on the show, from Huffman's morally dubious principal to Timothy Hutton's conflicted basketball coach. American Crime is not a show about heroes and villains. It's about people who fall into moral shades of gray in equally gray situations.

To say the boys' sexual orientation doesn't matter or isn't a big deal would be blatantly false. Their sexuality matters deeply. It's a huge part of who they are, and vital to the story Ridley is telling. He and his team have chosen a precarious tightrope to walk. American Crime runs the risk of promoting dangerous stereotypes about gay men as sexual assailants. What's amazing is how the show barely blinks in the face of such a challenge. It merely rolls up its sleeves and tells a compelling, intelligent story.

Moreover, Taylor and Eric being gay isn't treated as saucy, shocking or salacious information. Their sexuality is not titillating. It's not the kind of OMG moment made for tweeting in a show like Scandal or How to Get Away With Murder, ABC's much more popular dramas. The boys' sexuality is just a fact.

All American Crime aims to do is show its audience the truth in an artful, powerful way, no matter what that truth may be. The end result is more powerful than a dozen OMG moments combined. It's revolutionary TV.