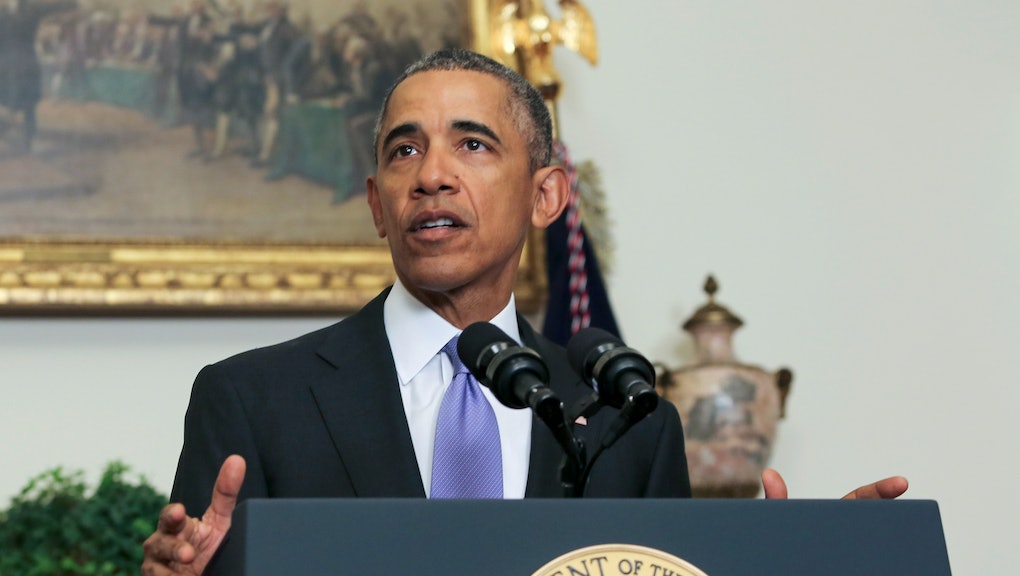 Obama Has Some Tough Words for Bernie Sanders

President Barack Obama won't be endorsing a presidential candidate until the Democratic primaries are settled, but he left little doubt in a new interview that he's pulling for erstwhile rival Hillary Clinton to succeed him in office.

Speaking with Politico amid signs that Sen. Bernie Sanders (I-Vt.) is nipping at Clinton's heels in Iowa and growing his lead in New Hampshire, Obama suggested that while the progressive insurgent offered voters a "bright, shiny object," Sanders hasn't thought through the day-to-day reality of serving as president.

The critique: While Sanders has placed economic inequality at the center of his campaign, Obama told Politico that "you don't have the luxury of just focusing on one thing."

"I don't want to play political consultant, because obviously what he's doing is working," Obama said, adding, "I will say that the longer you go in the process, the more you're going to have to pass a series of hurdles that the voters are going to put in front of you."

Though Sanders' surge caught many political observers by surprise, Obama said it shouldn't have.

"Bernie came in with the luxury of being a complete long shot and just letting loose," he told Politico. "I think Hillary came in with the both privilege — and burden —  of being perceived as the frontrunner... You're always looking at the bright, shiny object that people haven't seen before — that's a disadvantage to her."

But in an implicit jab at Sanders, Obama suggested that his fiery, often disgruntled brand of progressive populism was ill-suited to the American electorate.

Stumping in Maquoketa, Iowa, on Saturday, Sanders offered a sharply different message. Railing against inequality, the senator said, "I am angry and millions of Americans are angry." In a statement, his campaign noted that Sanders was firing back at former President Bill Clinton, who has argued that voters need "not anger but answers."

The Obama factor: It's hard not to read Sanders' denunciation of America's "rigged" economy as, in part, a critique of Obama's stewardship, but despite stylistic and substantive differences between the urbane liberal president and the prickly socialist senator, Sanders has tempered his past criticism of Obama as he seeks to woo Democratic voters.

Though Sanders once encouraged a progressive primary challenge to Obama in 2012, he's lately lauded Obama on a range of issues, from combating the Islamic State terrorist group to campaign finance reform to climate change. With Obama boasting an 81% approval rating among Democrats, and many of his fellow partisans wistful at the thought that he'll be gone soon, it's a necessary shift if Sanders wants any hope of upsetting Clinton.

But it's Clinton who's done the most to tie herself to Obama. That strategy was most noticeably on display in last week's Democratic debate in Charleston, South Carolina, where Clinton tightly embraced the president on issues like financial regulation and health care reform and pitched herself as the one Democrat who could forestall a Republican presidency and wholesale repeal of the Obama legacy.

"If Secretary Clinton had had her way in 2008, there never would have been a President Barack Obama," Sanders campaign manager Jeff Weaver told reporters after the debate.

Of course, Obama overcame the Clinton financial juggernaut that year, dislodging a frontrunner once regarded as inevitable. Eight years later, that improbable triumph gives Sanders backers hope — but there's one man who's not a fan of the comparison.

Asked by Politico whether he saw Sanders 2016 as an analogue to Obama 2008, the president replied, "I don't think that's true."