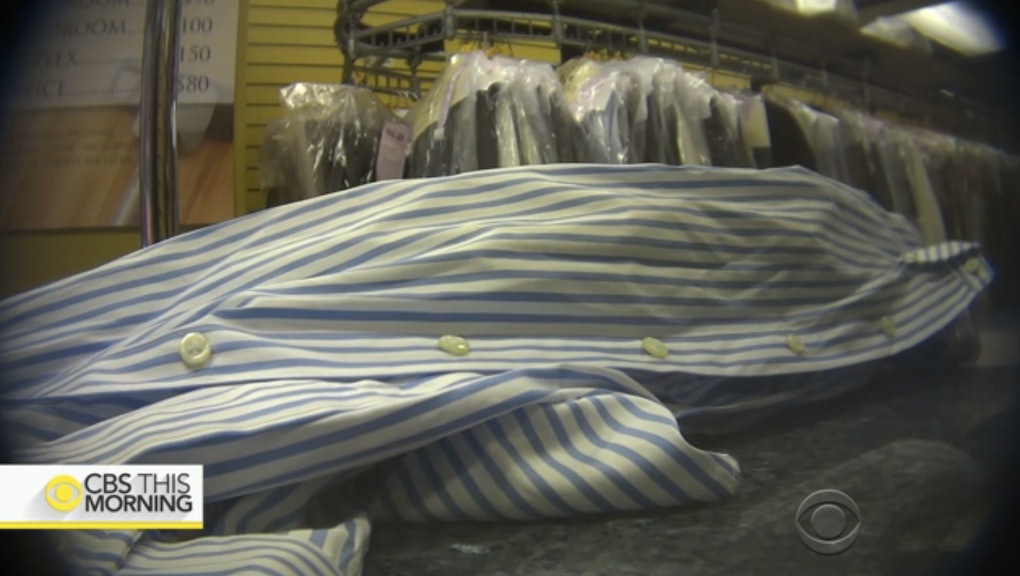 Ladies, You're Probably Paying Way More for Your Dry Cleaning Than Men Are

The pink tax is a proven, frustrating reality. Since the release of a study from the New York City Department of Consumer Affairs, the truth can't be avoided: We live in a world in which products marketed towards women cost more than the equivalents for men, at an average rate of 7%. From shampoo to shaving cream and razors, it's more expensive to be a woman.

Now CBS News has tracked down yet another place where gender price discrimination is thriving: the dry cleaners.

In a segment on CBS This Morning that aired Monday, CBS went undercover at several New York City dry cleaners to see if they charged women more for services than they did for men. For the investigation, one female producer and one male producer dropped off nearly identical items — 100% cotton button-down shirts in similar sizes and colors — and asked for the same service.

What they found is that the female producer was charged at least twice as much in more than half the businesses they visited. "In one, she was charged $7.50 while her male counterpart just $2.85," reports CBS News. "At another, she paid $3 more."

That shouldn't be too surprising, considering that according to New York City's Department of Consumer Affairs' report, women paid more than men for similar products 42% of the time. What is surprising is that extends to services like dry cleaning as well.

At one of the dry cleaners CBS visited, the female producer actually asked an employee why the pricing was different for men's and women's shirts. According to CBS News, the employee said, "The machines and how we press it, that's the difference."

Apparently, the pressers used after washing are only for men's shirts, so pressing women's shirts with a whole other system costs more. Women's shirts just don't fit in their standard machine, apparently. "Having a shirt laundered and machine-pressed does not exist for women's tops," Kam Saifi, the owner of Next Cleaners, told CBS News.

But you'd think this would have been fixed already. Price discrimination at the dry cleaners has been whirling around for a few years now: In 2009, the New York Times called out cleaners for systematically charging women more for services. One of the women the Times interviewed even conducted a 50-store study herself and found that for laundering, men paid an average of $2.86 while women paid $4.95.

Even President Barack Obama weighed in on the issue. In 2014, the Washington Post reported that he told a group of women gathered at the White House for a pay equity event, "We'll talk about dry cleaners next, right, because I know that — I don't know why it costs more for Michelle's blouse than my shirt."

Although New York's city code prohibits gender price-gouging for services, as the Times pointed out in 2009, "Nothing prevents cleaners from charging different amounts for shirts that require different amounts of work, which is how they typically explain the seemingly gender-based price gaps."

"You don't realize how badly you're getting ripped off or being taken advantage of, as a woman, because you've become so conditioned to pay more," Consumer Reports' Tod Marks, a senior project editor, told CBS News.

Perhaps that will change soon, now that more and more women are in fact getting wise to the so-called pink tax. As we recently found here at Mic by buying all men's beauty products, buying bro can save you $23.38 during the course of the week.

There is no federal law banning the practice of businesses and companies charging more for products geared towards women, but the reality is becoming increasingly well-documented — and increasingly frustrating. Hey, lots of people use the dry cleaners, along with toiletries. Eventually, something's gotta give.