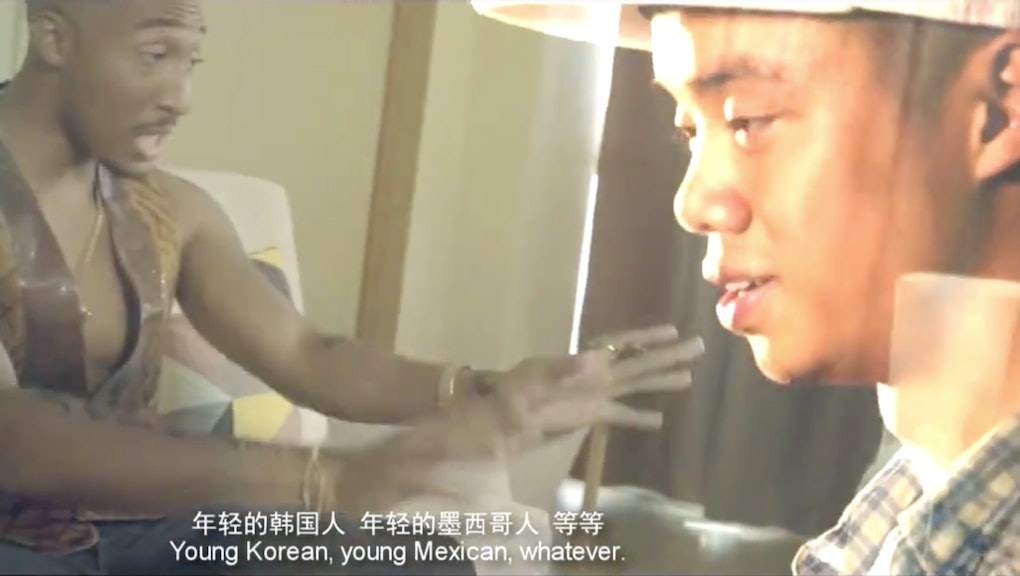 The Actor Behind the Confusing, Low Budget Chinese Tupac Biopic Shares His Story

Last November, one of the strangest pieces of hip-hop filmography found its way onto the internet. It presented itself as a trailer for a movie about a young Chinese student writing a book report on Tupac Shakur, complete with quaint reenactments of some of the rapper's finest interviews. It set the internet ablaze, partially because it beat Hollywood to making a film with Tupac as a main character, but more so because every second of it was absurd.

The shots alone were wild, from the teacher's hyper-curly hipster mustache to faux Tupac's elaborate gesticulations while he spits his street poetry. There were explosive transitions, gratuitous chase scenes and even a military demonstration. It hit on just about every B-movie trope, drawing blank, confused, breathless takes from almost every major music publication.

It turns out this was exactly the aesthetic its creators were going for. There's no actual film to accompany it. That trailer (banished from YouTube thanks to a copyright claim, but floating around other places) is apparently the first offering in a much larger campaign being run by Tsalta Baptiste, the actor who plays Tupac, to introduce Chinese audiences to authentic American hip-hop culture and to get American hip-hop thinking about its global status.

"People always criticize China for releasing low quality product or materials, as far as bags and shoes or whatever," Baptiste told Mic in a phone interview while on a brief trip back to the United States. "We decided to make a film version of that to try to direct people's attention to what we're doing over here."

Baptiste is working with a growing group of partners in the Chinese entertainment industry in his attempts to shed light on hip-hop's Golden Age roots, which are strangely overlooked in the country. He realized this void while studying toward a master's in international development at Zhejiang Yuexiu University of Foreign Languages, looking for a way to utilize his previous experience in entertainment management. He had previously mentored under Mathew Knowles, father of Beyoncé and famed talent scout in his own right. When Baptiste saw the gap in the entertainment market in China, he seized it.

"There's a lot of knowledge of American culture — a lot [of] Big Bang Theory, Two Broke Girls, typical American stuff — but not necessarily the true diversity of America," Baptiste said. "Hip-hop is popular, but it's not the hip-hop we know. It's an appropriated version that's Korean."

He names Korean pop groups, like G-Dragon and Big Bang, the latter of which he describes as "an eccentric and elaborated version of the Black Eyed Peas." There's a little Eminem, he added. "You know things that are easier to sell in China, because the market has been saturated by Eurocentrism," he said. But people there have little knowledge of its original innovators, like Thug Life poet Tupac, which he aimed to change with the trailer.

There are issues with importing hip-hop into China wholesale. The Chinese government still maintains tight censorship laws, and the country's cultural precepts encourage its people to avoid "spiritual pollution."

"It's not good to curse, or show a lot of sexuality, anything that can pollute your spirit," Baptiste explained. This is exactly why Jay Z found himself unable to perform in the country in 2006, with ministry of culture officials citing the rapper's "vulgar language." It's also why Baptiste and his director, young filmmaker Steven Sheng, chose to portray Tupac's more sensitive, romantic side.

"I felt that in order for the Chinese market to receive him well we had to make him more of a philosopher," Baptiste said. "Everything that Tupac says in that trailer is stuff that he said in real life. We didn't change it or script anything in any way. We just wanted to make sure we shared the king, the head honcho of hip-hop, the true hip-hop, not any extended or appropriated version."

Judging solely on the amount of people the trailer reached on hip-hop publications at home and overseas, it signals that Baptiste did touch a nerve with that somehow. He's since become somewhat of a local celebrity, which he intends to push to the fullest extent. The actual resources at his disposal are slowly catching up as he pours more thought and ambition into his mission.

"Yeah, we happened to make a video and it went viral, but this is just the beginning," Baptiste said. "We want to show the world that these cultures fit together. We're going to show people a movement. It has to be global. I want the hip-hop community to see what's going on over here."

Next up is the original Kung Fu-admiring, hip-hop crossovers: the Wu-Tang Clan.

"I know it sounds kind of cliché, but that's exactly why we're doing it," Baptiste said. "When it comes out, it's probably going to be on CNN. The way we're going to take this, it's going to be epic, because we have to equal or rival our last project. I know you're thinking, 'Wu-Tang, China, I think I've seen that before. I know what's going to happen.' But trust me, dude, this is going to be something you've never seen before."