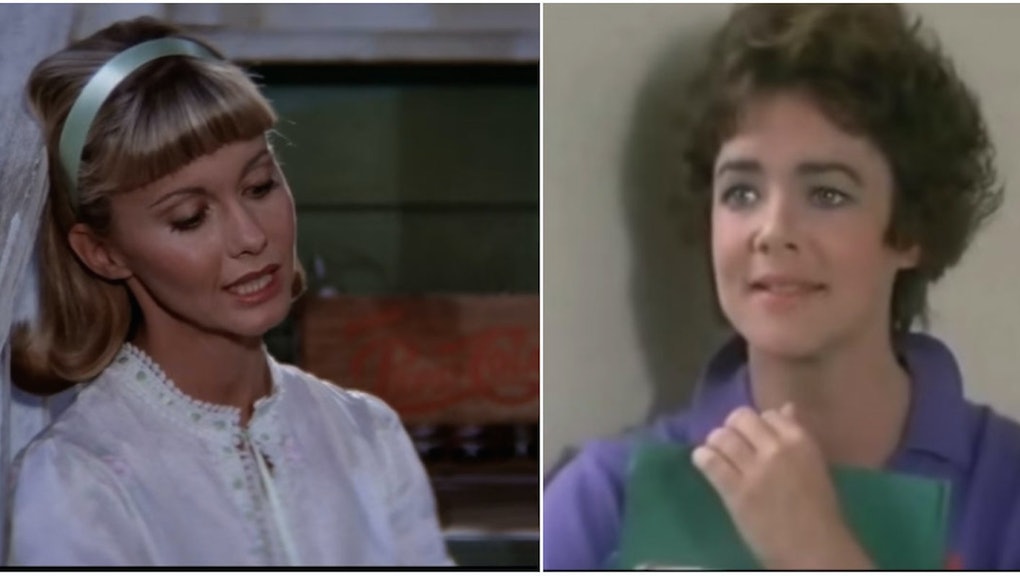 Being a Rizzo in a Sandy World

Eve was a JV basketball starter and A student. I snuck vodka into science class in Mountain Dew bottles and smoked menthols during free period. Eve was aggressively well-spoken and charming in a way that makes middle-aged women blush and cafeteria workers slip extra slices of pizza. I once got called into the dean's office for flipping off my English teacher. Eve dated lacrosse players and class presidents from neighboring boys' schools. My romantic life consisted of flashing terrified seventh-grade boys on the school bus.

Eve was a Sandy. I was a Rizzo.

In case you need a refresher, Grease tells the story of Sandy (Olivia Newton-John), a virtuous young woman who falls in love with greaser Danny (John Travolta). When Sandy transfers to Danny's school, she falls in with the Pink Ladies, a group of fast-talking bad girls led by Rizzo (Stockard Channing), a chain-smoking, promiscuous loudmouth. With the Pink Ladies' help, Sandy transforms into a skintight leather-clad bad girl and ends up with Danny, thus reinforcing the message that changing yourself is the quickest way to a man's heart.

To commemorate Grease: Live, the upcoming adaptation of the 1978 film airing on Sunday, Jan. 31, I watched the original on Freeform earlier this week. As an adult, three things became crystal clear to me: 1. "Ultramatic" and "hydromatic" are not real words, according to the Oxford English Dictionary; 2. I still don't get why that fucking car flies in the end; and 3. The world only has room for two kinds of women — the Rizzos and the Sandys. And while there are various shades between the two poles, akin to the Kinsey scale or the color-display spectrum, most women are at least a few gradients away from either one.

As a child, it's easy to watch Grease and dream of being Sandy, of being blonde and peppy and poodle-skirted and lusted after by track stars and bad boys alike. But upon rewatching as an adult, it's painfully obvious that the real hero of Grease — or, at least, the most realistic one — is Rizzo, the brazen, hickey-bearing man-eater, a woman who fucks and fights without apology, who your great-aunt would probably refer to as "fast."

"I'm gonna get my kicks while I'm still young enough to get 'em," she declares before she sexily shimmies down a drainpipe, with "kicks" in this instance being a clear stand-in for "Kenickie's D."

In its purest, most distilled form, Rizzo v. Sandy is a classic case of the Madonna-whore complex, yet another example of our culture classifying women purely by their sexual history or lack thereof. And to a degree, both women fit neatly into this dichotomy.

But the contrast goes beyond merely pitting the slut against the virgin. As dictated by the movie, it's essentially a dichotomy of personality types, of the woman who's happy to play the game — get good grades, make cheerleading squad, marry the most handsome guy in school — versus the woman who refuses to play by the rules, who wears the tightest pants with the lowest-cut tops and who wants to get her kicks while she's still young enough to get 'em.

Sandy doesn't drink or swear or rat her hair; Rizzo does all three. Sandy mopes after Danny throughout the entire movie; Rizzo refuses to be ignored or mistreated, throwing a milkshake in Kenickie's face when he throws her shade. Sandy travels all the way from Australia to transform herself according to Danny's desires; while Rizzo is horrified at the prospect of changing for any man. "You hauled your cookies all the way to the beach for some guy? No man is worth that," she tells her, incredulous at the idea that she'd haul ass anywhere for any man.

At its core, being a Rizzo is about sticking to your convictions, about being steely-eyed and savvy and headstrong and maybe a little bit irresponsible, but most importantly yourself. Maybe the Rizzos don't get the flying car endings; their futures aren't always as bright and fantastical as that. But damn if they aren't going to be dark and weird and interesting.

The Sandy/Rizzo contrast is universal enough that it can be applied to pretty much every girl-on-girl feud in pop culture history. Betty is obviously a Sandy, while Veronica is a classic Rizzo. Nashville good girl Taylor Swift is a Sandy, while Christian singer-turned-raven-haired sexpot Katy Perry is a Rizzo. (The fact that her aesthetic is less greaser-girl chic and more anthropomorphized Bratz doll is no matter.) From Angelina Jolie and Jennifer Aniston to Elizabeth Taylor and Debbie Reynolds, the song remains the same.

Except, well, those stark definitions aren't so clear-cut and unchanging. Angelina, for instance, made a mid-2000s pivot from Rizzodom to Sandyhood in the public's eye when she stopped wearing vials of her husband's blood and started doing humanitarian work and wearing Eileen Fisher. Her arch-rival Jen also made the switch when she ditched her America's Sweetheart image by fucking John Mayer (a one-way ticket to Rizzodom if ever there was one) and taking film roles that involved her stripping and fellating a hot dog.

Sometimes, a Rizzo can outwardly present as a Sandy, and vice versa. In private, Eve was tough and profane, if not tougher and more profane, than I was; she was also more sexually experienced, which is to say she had touched a guy's penis through basketball shorts during 8 Mile (essentially the gold standard for libidinousness in 2003). But because I was rebellious and mouthy, and she polished and ambitious, I was a Rizzo and she a Sandy, labels that stuck with us in principle if not in name for the rest of high school.

In practice, this was ridiculous. It made no empirical sense that I could be a virgin and still be known as a slut, while Eve could go down on a lacrosse player at a warehouse party and still be considered Girlfriend Material the next day. But that's the thing about being a Sandy, or a Rizzo, or any other type of label that is typically assigned to women to make sense of who they are and where they fall in the social chain of command: In practice, they don't really have to make sense at all.

In Grease, Rizzo and Sandy ultimately become friends (at the very least, Rizzo is willing to be on-hand to help with Sandy's third-act magical slut makeover); in reality, however, this is usually not what happens when you're young, and it's not what happened with me and Eve. (Our friendship ended, as is usually the case, over a boy, a transfer student who turned out to be less of a Danny Zuko and more of an IRL Jeff Conaway-level hot mess.)

Rizzo v. Sandy, Madonna v. whore, even Jen v. Angelina: When you're young, these dichotomies exist purely for the purpose of pitting two very different types of women against each other, and often they are successful at doing so. The girls who are willing to play the game don't sit on the same side of the cafeteria as the girls who get their kicks; the former get their flying-car happy endings, and the latter get their pregnancy scares.

All of this changes, however, when you grow older and the false lines in the sand slowly fade away. Eventually, the Rizzos realize that the real-life, grown-up Sandys of the world, with their orthodontist husbands and plum PR internships and bridesmaid bathrobe photos on Instagram, aren't as vapid and conventional as all that; the Sandys start to appreciate and maybe even envy the Rizzos' ballsiness. Eventually, they reach some sort of detente, because the girls who are willing to play the game have more in common with the girls who get their kicks than we think.

*First names have been changed.