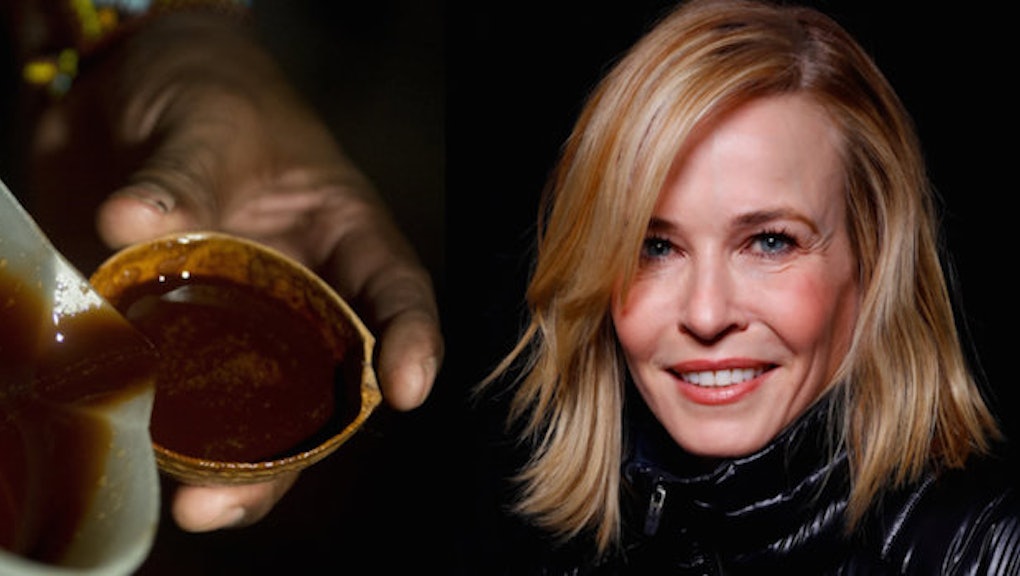 What Is Ayahuasca? The Truth About Peruvian Drug From 'Chelsea Does' Drugs Episode

Chelsea Handler tackles some touchy subjects from racism to hard drugs in the first season of her Netflix-produced series, Chelsea Does. During the four-part docuseries' final episode, "Chelsea Does Drugs," the 40-year-old standup comic travels with two friends to Peru to try a drug known as ayahuasca, notoriously sought after by celebrities.

"I want to show people what happens when you get fucked up. I'm going to Peru to do ayahuasca," Handler states matter-of-factly in a preview for the streaming show. Handler said she was amped to try the drug for some time, saying, "It's supposed to be one of those transformative experiences; people say it changes their life."

Though Chelsea Does somewhat glorifies the infamous ancient herbal drug ayahuasca — after all of the vomiting and diarrhea, that is — the liquid substance contains N,N-Dimethyltryptamine, a Schedule 1 drug considered very dangerous by the United States government.

What is ayahuasca? As it turns out, the "herbal tea" with hallucinogenic effects is typically derived from a combination of Banisteriopsis caapi vine and Psychotria viridis leaves. Indigenous communities throughout the Amazon have used the thick, pasty liquid as part of ancient ritualistic traditions led by community shamans. The shamans, or the one and only doctor responsible in each indigenous community, sing and play music as the drug is consumed, leading those who consume ayahuasca through a spiritual journey.

At first, it didn't seem like Handler would be able to enjoy the purpose of her trip to Peru after her two friends had negative experiences while tripping on ayahuasca. The standup comic, meanwhile, said she barely felt buzzed during her first night trying the drug. The next day, however, Handler scheduled a private night with a shaman who would help administer the dosage of ayahuasca and stay with her through her trip.

After some intense bouts of nausea and vomiting, Handler appeared to be tripping on ayahuasca, frequently moving her arms about and smiling widely, deep in her thoughts. The comedian wanted to learn more about her inner self, a theme which remained a staple throughout most of Chelsea Does.

"Why would having an ayahuasca experience appeal to anyone?" UCLA professor of psychiatry and biobehavioral sciences Dr. Charles Grob asked in an interview with Fox News. "I think people are searching for some degree of a psycho spiritual transformation."

However, ayahuasca may have a purpose other than spiritual cleansing: Scientific American debuted a report on a pilot study which tested the drug's potential effects on depression in April. However, the results are far from conclusive.

"It is possible that ayahuasca and other serotonergic psychedelic drugs, such as psilocybin, may be useful as antidepressants for particular subsets of patients in the future," King's College London researcher and psychiatrist James Stone said in the report. "We await the results of well-designed, random controlled trials to determine clinical effectiveness."