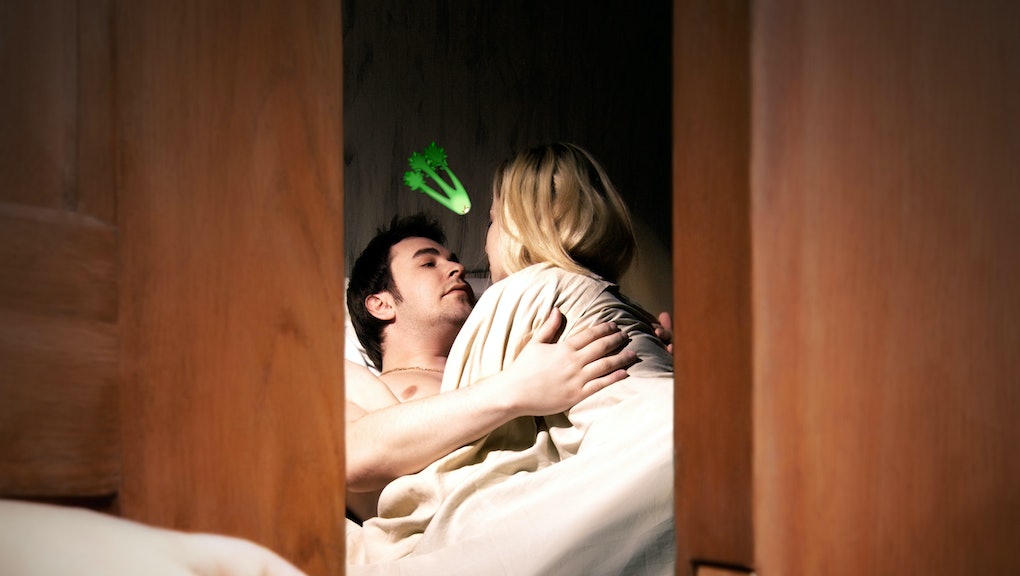 People for the Ethical Treatment of Animals, or the organization known as PETA, is all about thirstily using sex and nudity to bring attention to its cause.

Case in point: this brand-new banned Super Bowl ad (NSFW link) that the organization said in a press release "left TV execs speechless." While the video is indeed fairly sexually explicit, it also comes with a message: Men who eat meat allegedly have a harder time keeping themselves hard.

The video features side-by-side shots of two pairs of humans mating. The man in the left shot is a "meat eater" while the man on the right is a vegan. At first, both couples seem to be having a dandy ol' time engaging in heterosexual intercourse.

(Editor's note: The following GIFs are super-duper NSFW, so proceed at your own risk.)

But then! Literally at the five-second mark, our meat-eating friend loses his boner, much to the disappointment of his female lover. Meanwhile, the vegans continue their raucous lovemaking.

As the vegans keep banging like bunny rabbits, the meat-loving male lumbers away, ostensibly to go eat a burger while crying about what a pathetic, impotent excuse for a man he is.

And then an air conditioner falls on him! Meat is bad.

Meanwhile, the vegans keep having porn-sex. PETA rests its case.

In the video's accompanying press release, the organization states that "low-fat vegan meals tackle all the physical causes behind the vast majority of cases of impotence: high cholesterol, obesity, diabetes, prostate cancer or inflammation and hormonal imbalances." PETA adds that research has recently suggested men should eat more fruit to lower their risk of developing erectile dysfunction.

"Each person who goes vegan saves more than 100 animals a year from suffering and a terrifying death in today's industrialized meat, egg and dairy industries," PETA concludes. "The key to a long-lasting, hot love life is to start with delicious vegan meals in the kitchen."

While PETA is right that eating fruits and veggies has been linked positively to erectile health, the claim that vegan men are better in bed than carnivores isn't necessarily true. Sure, eating a low-fat diet rich in fruits and veggies can yield myriad health benefits, but the idea that you need to abstain from eggs and cheese to have an awesome sex life is questionable at best. (In fact, some research has actually suggested that being a vegetarian is actually bad for your health, but, well, Kermit meme.)

While the foods we eat may affect our erections, young men who can't get it up could be struggling due to psychological factors or medications that have nothing at all to do with diet.

Either way, lots of men have complicated relationships with their penises. When erectile dysfunction enters the picture, they're likely to feel insecure and ashamed — and exploiting that insecurity to promote a vegan diet probably won't help them feel any better. So let's all eat tons of sliders and chicken wings during this year's Super Bowl in protest.