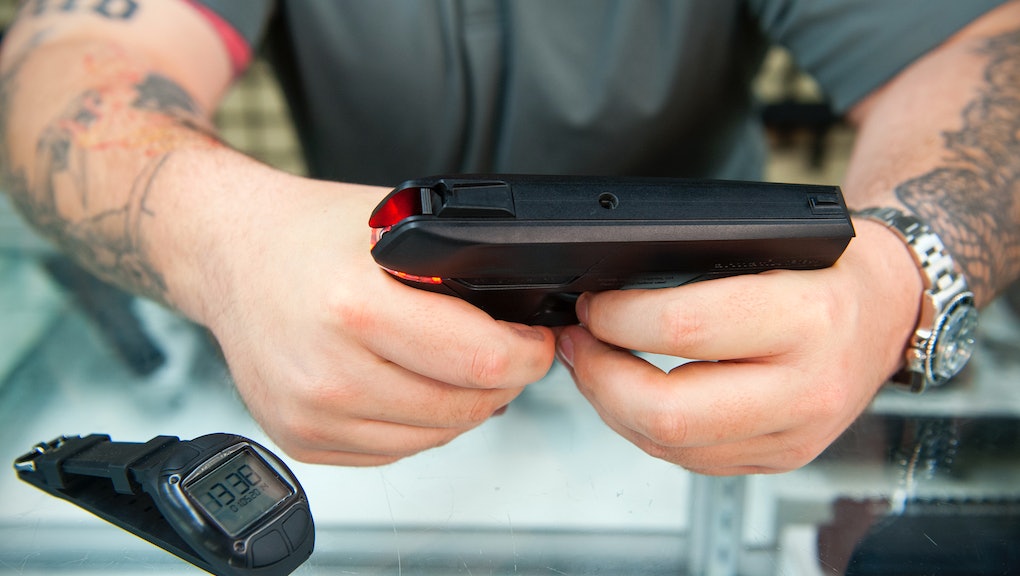 One Surprising Statistic Shows Why Smart Guns Are the Future

The push for new gun control laws in the United States has been met with significant opposition. But there might be one thing most Americans agree on: When it comes to firearms, they'd be down to purchase a smart gun.

A smart gun is a high-tech firearm that only works for one, authorized user. According to a recent study published in the American Journal for Public Health, nearly 60% of Americans would be willing to purchase one.

In a web-based survey, 3,949 participants — both gun owners and non-gun owners — were asked the following question: "If you were to purchase a new handgun, how willing would you be to purchase a childproof gun that fires only for authorized users?" Answers were submitted using a five-point rating system, from "very unwilling" to "very willing."

If they had to buy a new handgun, 59% of respondents would be willing to opt for the smart, childproof option. Eighteen percent would be unwilling, while 23% were undecided. The 59% who'd be willing to purchase a smart gun included both liberals and conservatives, as well as gun owners and non-gun owners.

"We were surprised and encouraged by the results," one of the study's researchers, Julia Wolfson, told Mic. Wolfson is a doctoral student at the Johns Hopkins Bloomberg School of Public Health.

Now, the research team is hoping their findings will help bring smart gun technology to the mass market.

The technology is already here. Smart guns aren't some lofty, hypothetical idea. Developers are working on models that recognize their rightful owners using fingerprint scans. Other models, such as the Armatix iP1 Pistol, only work when they're within a certain distance of a special watch worn on the authorized user's wrist.

Even President Barack Obama is on board with smart guns. "If we can set it up so you can't unlock your phone unless you've got the right fingerprint, why can't we do the same thing for our guns?" Obama said while announcing new gun control measures earlier this month.

Still, smart guns have their detractors — and that's why they're not available for purchase yet. Some fear the government will use smart gun technology to secretly track gun owners. Others argue that guns need to be as easy to operate as possible, and can't just work some of the time.

"As President Obama well knows, the fingerprint software on his phone works rather erratically," Charles C.W. Cooke, staff writer at the National Review and author of The Conservatarian Manifesto, wrote in a New York Times op-ed. "Often it takes a user two or three tries to log in ... If this were to happen on a Glock, the user would be dead."

Many folks blame the country's dearth of smart guns on a law passed in New Jersey back in 2002. According to the law, as soon as the first smart gun hits the market, all firearms dealers in New Jersey must exclusively sell smart guns. As a result, smart gun detractors have notably bullied retailers out of introducing them to their stores.

The National Rifle Association has spoken out against mandating smart guns nationwide. Though it doesn't object to the development of the high-tech firearms, it does oppose "any law prohibiting Americans from acquiring or possessing firearms that don't possess 'smart' gun technology," the organization said in a statement.

Could this new research be the tipping point? Wolfson and her team certainly hope so.

"The results of this study provide evidence to show there is a marketplace beyond what the federal government can do," Wolfson told Mic. "There's an interest among the general public in these guns as well."

The gun industry should take note: "There's a market here, a potential to make a profit and do good," Wolfson said. "To do something that is beneficial for public health, while still working within the space of selling guns."

And given the more than 52,000 incidents of gun violence that occurred last year in the U.S., it simply makes sense to make guns safer — just as we improve upon other commercial products to make sure they don't kill us.

"It's really taking the standard injury prevent approach that we've applied to any number of consumer products when they present a danger, and we see high rates of injury or deaths — say cars, or prescription pill bottles," Wolfson told Mic. "This is just taking that standard approach that has been done over and over in other instances, and applying it to guns."

"People want to have guns in their home," Wolfson continued. "What can we do to take steps to make sure a child can't pick up that gun and shoot themselves, or another child?"