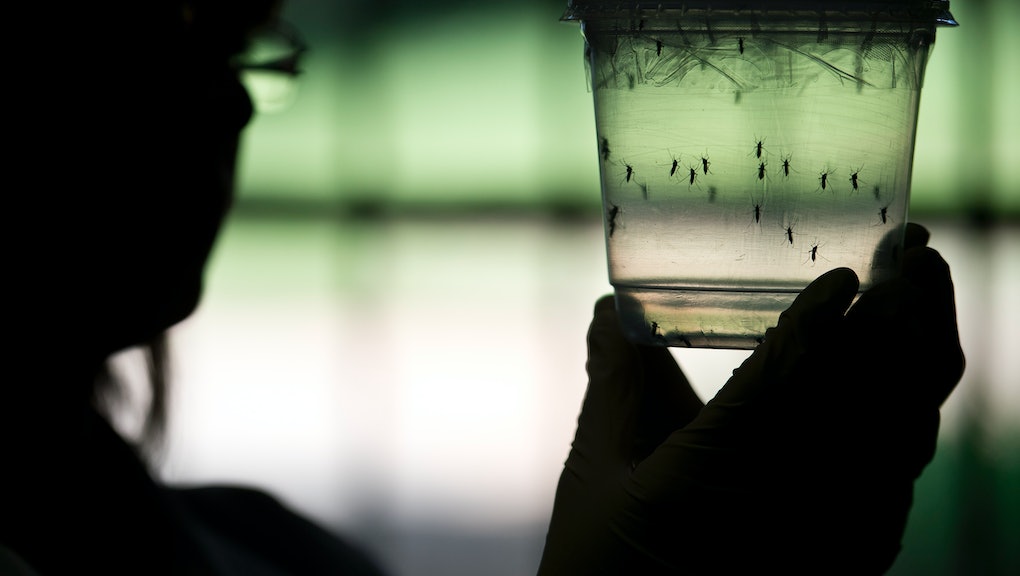 On Sunday an arm of the World Health Organization reported that the Zika virus is suspected to spread to all countries in North and South America, with the exception of Canada and Chile. The virus, which is carried by and contracted from mosquitoes, has been sweeping across countries in South America and the Caribbean, bringing with it increased illness and possibly a meteoric rise in birth defects. To date, no locally transmitted cases have been reported in the U.S., though there have been reported cases in the States in residents who had traveled abroad in affected regions.

"There are two main reasons for the virus's rapid spread," reads the statement from the WHO and the Pan-American Health Organization. "[Firstly,] the population of the Americas had not previously been exposed to Zika and therefore lacks immunity, and [secondly] Aedes mosquitoes — the main vector for Zika transmission — are present in all the region's countries except Canada and continental Chile.

"PAHO anticipates that Zika virus will continue to spread and will likely reach all countries and territories of the region where Aedes mosquitoes are found."

Here's a map of countries with reported active transmission cases:

"Prior to 2015, Zika virus outbreaks have occurred in areas of Africa, Southeast Asia and the Pacific Islands," explained the Centers for Disease Control and Prevention in a statement. "In May 2015, the Pan-American Health Organization issued an alert regarding the first confirmed Zika virus infections in Brazil. Currently, outbreaks are occurring in many countries."

According to the WHO, symptoms of the virus include rashes, muscle and joint pain, headaches and conjunctivitis. These afflictions can last anywhere from two to seven days.

Perhaps more alarming is how the disease may affect the unborn babies of pregnant women infected with the virus. Reuters reported that there have been more than 3,800 cases of microcephaly in Brazil, "over 30 times more than in any year since 2010," and that Brazil's Health Ministry previously said the virus was linked to the condition. Microcephaly is a birth defect that results in babies born with abnormally small heads.

The danger of birth defects possibly linked to the virus has caused officials to respond to the crisis, and now women in El Salvador are being advised to delay pregnancy until 2018.

So far, there is no known cure or vaccine for the Zika virus, however the WHO recommends that travelers and residents take precautions to protect against mosquito bites. Meanwhile, the WHO is also working to help curb the spread of the virus by bolstering surveillance of reported cases, erecting labs to run tests on the disease, issuing health recommendations, supporting research and helping countries eliminate mosquitos.

"We've got no drugs and we've got no vaccines," Oxford University global health professor Trudie Lang told Reuters. "It's a case of deja vu because that's exactly what we were saying with Ebola. It's really important to develop a vaccine as quickly as possible."