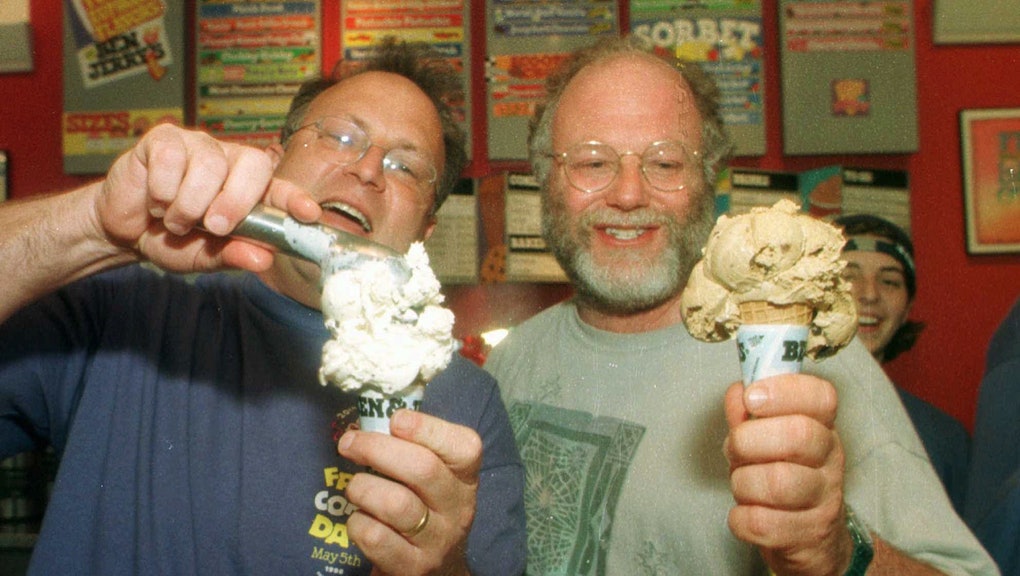 Ben & Jerry's cofounder Ben Cohen has been feeling the Bern since he endorsed presidential candidate Bernie Sanders in August.

Cohen, with the help of his business partner Jerry Greenfield, are stumping for the Vermont Senator the best way they know how — by unveiling a new flavor devoted to Sanders called "Bernie's Yearning." The flavor is not associated with the Ben & Jerry's brand, but otherwise bears all of the markings of a classic Ben & Jerry's pint.

Apparently the flavor is comprised of mint ice cream, topped off with a hard chocolate disc; the chocolate, says the packaging, "represents the huge majority of economic gains that have gone to the top 1% since the end of the recession. Beneath it," — aka the mint ice cream — "the rest of us."

According to Politico, the Sanders campaign provided the Vermont ice cream duo with the necessary ingredients and supplies so that the two could create the flavor in Cohen's kitchen. They'll be churning and packing the ice cream the old-fashioned way, but — and herein lies the rub — in limited quantities.

Yes, Cohen and Greenfield only made 40 pints. The 25 pints which have been donated to the Sanders will go to the lucky very few who win the online contest ice cream lovers. (Enter on the official website devoted to "Bernie's Yearning — but prepare for disappointment.)

It's a bummer, but it's for the best: Politico speculated that the ice cream's unofficial status is intended to skirt campaign donation laws that forbid corporations and individuals from making sizable donations to federal campaigns, except for volunteer efforts. The brand similarly skirted the problem with Barack Obama's unofficial flavor, "Yes, Pecan!" in 2009.

Still, none of this accounts for the question of naming Sanders's new flavor, an area in which some saw room for improvement. The New Republic offered five alternatives to "Bernie's Yearning," suggesting the name is "kinda pervy-sounding." The Republic would rather have us choose from "The Red Threat," "Eat the Rich," "Bust the Upper Crust," "Feel the Bern" and "Bernie Brozen Yogurt." (The Daily Caller drove this point home with the headline "Now You Can Fill Your Mouth With Bernie's Yearning.")

The chocolate covering "represents the huge majority of economic gains that have gone to the top 1% since the end of the recession. Beneath it, the rest of us."

Sanders has not come out publicly to say whether he has made an exception to his paleo diet to incorporate his "Yearning," but an ice cream flavor that bears his likeness is likely to sit well with the senator, whose wife, Jane O'Meara Sanders, recently revealed in an interview with People that Sanders proposed to her outside of a Friendly's, post-ice cream sundae.

Wrote Cohen on berniesyearning.com, "Jerry and I have been constituents of Bernie Sanders for the last 30 years. We've seen him in action and we believe in him."