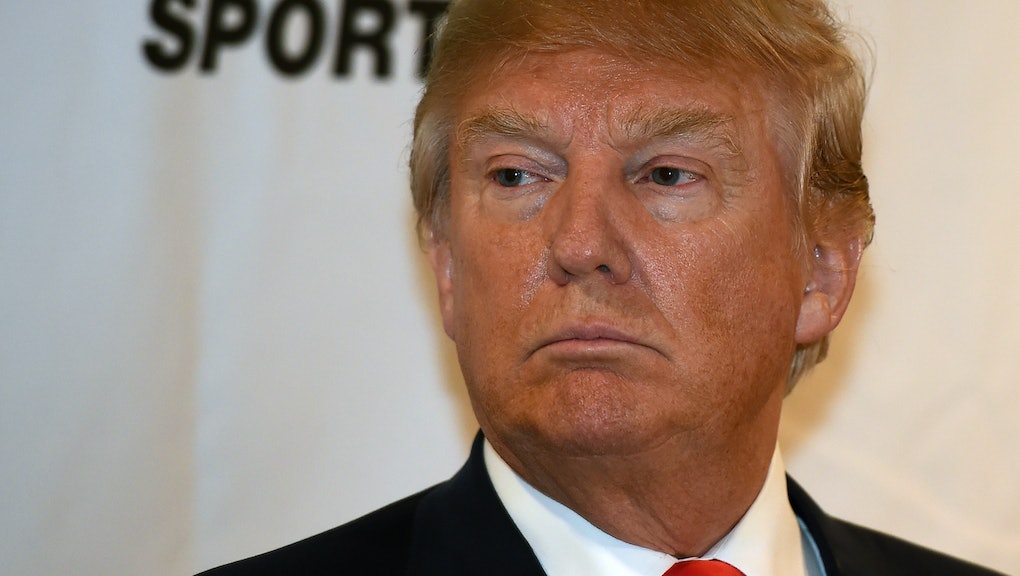 What Trump Would Mean for America's Image Abroad

BERLIN, Germany — A Donald Trump presidency could seriously damage the United States' relationship with its top allies, according to political officials and media observers in Europe.

On Friday, British Prime Minister David Cameron voiced his disapproval with Trump, telling Mic in an exclusive interview that the Republican frontrunner is making "the work we need to do to confront and defeat the extremists more difficult." Those comments came on the heels of a British parliament debate to ban Trump from entering the United Kingdom altogether, after a petition on the topic garnered more than 570,000 signatures.

"Dangerous," "racist," "disgusting" — those are just some of the words that prominent Germans used to describe Trump in interviews here, with their reactions ranging from shock to outright dismay that the billionaire real-estate mogul is leading in the polls despite his blustering comments about Muslims and Mexicans.

"Trump is being perceived as anti-foreigner, chauvinist, pro-guns, hostile towards women, as arrogant and ignorant, and an outrageous figure bordering on the ridiculous," Julian Reichelt, editor in chief of the German tabloid Bild, told Mic.

It is that last word, "ridiculous," that underscores one of the central problems with Trump's candidacy: He may be entertaining, but Trump is largely regarded as a joke internationally, according to Reichelt, who said Trump could tarnish the United States' reputation around the world.

"People kind of view him as a cartoon that stands for everything they dislike about the U.S.," Reichelt told Mic. "He makes it easy for people to overlook his achievements as a businessman and focus on his sometimes outrageous style of bluntness and candor. To many Germans and Europeans, he's a turbo-capitalist cowboy with weird hair."

Sound familiar? Reactions toward Trump in Germany are eerily reminiscent of the distaste Europeans had to President George W. Bush. During the Bush administration, protests against the U.S. in foreign capitals were common, and Americans traveling abroad routinely faced hostility, forced to try to defend U.S. foreign policy.

There is no publicly available data gauging opinion of Trump in foreign countries, but he was near-universally condemned overseas for his comments about Muslims. International media outlets have called him a "whack job" who is running a "noxious and gaseous political campaign."

All of this comes at a particularly tense moment when support for democracy is declining globally and the American image in the Middle East is tanking, despite the fact that cooperation between U.S. and its top allies is needed more than ever to end the war in Syria and defeat the grave threat posed by terrorist groups like ISIS.

America's image over the years: None of this is to say that President Barack Obama has not received his own share of criticism from Europeans on foreign policy issues.

Despite his historic speech in Berlin before a crowd of 100,000 people during the summer of 2008, Obama's approval rating has fallen in Germany recently due to his perceived inaction over the war in Syria, according to Reichelt.

"After eight Obama years of foreign policy inaction, especially concerning Ukraine and Syria, I do believe that even in Germany, many people would love to see stronger U.S. leadership," he said.

That may be true, but Obama still commands respect worldwide when compared to views of the U.S. under Bush (with several notable exceptions including Russia, Israel and Pakistan):

Why it matters: Recent diplomatic breakthroughs, most notably the Paris climate change accord and the Iran nuclear deal, have reiterated the importance of the U.S.' relationships with its allies. If the U.S. is truly to become great again, it simply cannot go it alone.

As Cameron told Mic, "What Donald Trump says is, in my view, not only wrong, but actually it makes the work we need to do to confront and defeat the extremists more difficult."