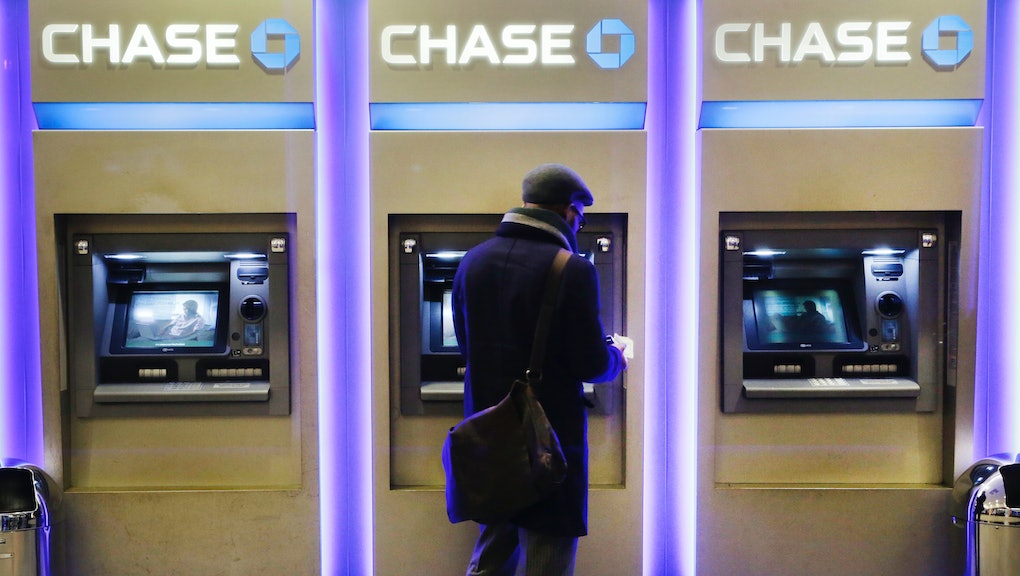 Here's How Much ATM Fees Are Costing Us

Our financial pain is apparently quite a gain for the country's biggest banks.

According to CNN, ATM and overdraft fees brought the country's banking triumvirate — JPMorgan Chase, Bank of America and Wells Fargo — upward of $6 billion in 2015, the first year in which banks were legally obligated to share that information with the public. That total profit shakes out to $25 extracted from the pockets of every adult nationwide, and the bulk of it — $5.1 billion — comes from overdraft fees.

"The Bible has a term for this practice," the Democratic senator from Vermont said. "It's called usury. And in The Divine Comedy, Dante reserved a special place in the Seventh Circle of Hell for those who charged people usurious interest rates."

In October, the Wall Street Journal reported that the average ATM fee had hit an all-time high of $4.52 per out-of-network withdrawal. When one considers the demographic worst affected by this added expense, Sanders' statement doesn't seem too far off the mark.

According to American Banker, those who use electronic benefits transfer (EBT) cards to access government aid are hit hardest by both ATM fees. Some banks treat EBT cards as out-of-network and dock users' accounts with each EBT withdrawal. But EBT cards are state-issued; they're not tied to any banking network.

And then there's the overdraft problem: Whenever an account dips below $0, its owner is charged. According to CNN, "Banks aren't supposed to charge customers overdraft fees when they use an ATM to get cash unless the customer chooses or 'opts in' to get the cash despite the fee." Still, it seems as though they don't always play by that rule. CNN cited a 2014 Pew study, which suggested that many consumers hadn't been given the "opt in" option — over half of those surveyed said they had no memory of doing so before overdrafting their accounts.

What's more, overdraft fees grew consistently over the first nine months of 2015, despite banks' claims that they're doing everything possible to protect their customers, CNN said. History is not exactly on the side of big banks: In 2012, JPMorgan Chase was court-ordered to pay out a settlement of $110 million to customers who alleged that the corporation had rearranged charges on their bank statements to improve the odds of an overdraft and its attendant fee.