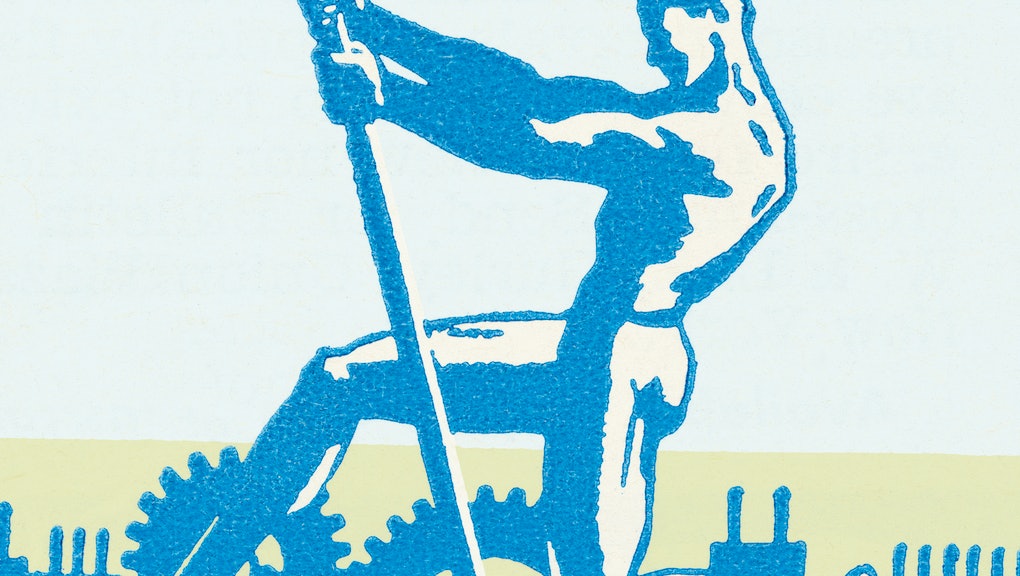 Back when I was single, my OkCupid profile was totally #masc, which is to say that it largely consisted of photos of me downing beers, attending football games and pretending to be good at golf. There were other photos I could have used — ones in which I was sipping a Cosmo or expressing an emotion, maybe — but somehow, I knew that the ones I used instead were more likely to result in an active inbox.

One afternoon in 2014, a dude I'd been talking to for a few days on OkCupid spontaneously asked me out for a drink after work. I agreed. Then I looked down and remembered that I had worn a pair of ripped jorts to work that day. And not goofy straight soccer dad jorts; these were hole-y, tight 1980s twink-in-the-West-Village jorts.

When I showed up at the bar a few hours later, he glanced down at my thigh area situation and his face displayed a mixture of distinct surprise and disapproval. I understood why. All prior images he had of me involved baseball caps and football jerseys, not the kind of wardrobe that suggested I'd show up to the bar wearing the same garment Mariah Carey did while rollerblading in her seminal 1995 music video for "Fantasy."

Without meaning to, I had made a masc-worshipping guy fall for me and then catfished him. Except instead of reeling him in with the picture of a hot stranger, I had simply used a hypermasculine version of myself.

I had "mascfished" him, if you will.

In the thirst-fueled terrain of gay dating apps, few issues are fraught with more potential landmines than the topic of masculinity.

On one end of the spectrum, we have self-described "straight-acting" men with strict masc-for-masc requirements, meaning that they will only date men of equal or greater machismo than them. On the other side, we have proudly feminine guys who call this out as internalized homophobia, meaning that they think masc-for-masc guys are overcompensating for their love of dicks by acting like dicks themselves. In between are men who may or may not put so much direct thought into the topic but probably lean in one of the two directions, whether they realize it or not.

But even when a man's profile doesn't explicitly advertise his interest in men who conform to heteronormative masculine norms, it typically goes without saying that such men are positioned for more match success than their campy counterparts — which is where mascfishing comes in.

"Most gay men already know that the more masculine you present in online dating profiles, the more interest you will attract," writer Rafi D'Angelo wrote for Slate in 2014. "I've always known that, aside from being black, my feminine, flowing, chest-length locks were the greatest deterrent to my own success."

In a social experiment, D'Angelo decided to put this hunch to the test and go on a straight up mascfishing spree. He swapped out his long-haired, expressive default face pic for one "with less expression and my hair pulled out of sight under a baseball cap." Activity on his profile boomed. In 10 days, he received six times as many messages as he had with his old pic in 14 days, resulting in a number of potential dates.

That is, until guys got a view of his feminine side. "[M]any of the guys with whom I was making plans — after great conversations online, of course — would cancel or stop responding completely once I let them see other pictures," D'Angelo wrote.

To be fair, not every man who presents as traditionally masculine on gay dating apps is a mascfish. Some may be presenting themselves honestly (or as honestly as they can in a few pictures and sentences). It also makes some sense why so many gay men (and women, for that matter) are drawn to manly men. In a culture that worships at the altar of traditional masculinity, there is a certain sex appeal in a dude who just emanates conventional manliness.

This would be just fine if all men were born with naturally deep, commanding voices and affinities for growing beards and fixing cars. But obviously #NotAllMen are born that way, so placing so much value on traditionally masculine qualities can leave many feeling pressured to "perform" these qualities in order to be more attractive to potential partners.

Joe*, a gay 25-year-old graduate student, told me he believes this is why mascfishing is a thing in the first place.

"I think people associate vulnerability with women and weakness because we live in a deeply misogynistic society," he said. "People aren't necessarily inclined to be vulnerable on a dating app or a first date. Therefore, I think men tend to get caught up in putting out weird vibes, especially in gay culture where men often feel obligated to balance out their attraction to other men with behaviors and activities that are often associated with heterosexual males."

The pressure to be butch sucks enough for straight guys, who are often doomed to keep their unwavering love of Sex and the City a dark, shameful secret. But for gay guys, it can be an express train to self-loathing. Because male same-sex attraction is traditionally associated with being effeminate, overcompensating is an inevitable element of the gay dating experience.

Psychologist Alan Downs acknowledged this conundrum in his 2005 book, The Velvet Rage.

"We were taught by the experience of shame during those tender and formative years of adolescence that there was something about us that was flawed, in essence unlovable, and that we must go about the business of making ourselves lovable if we are to survive," he wrote.

Stuart*, a 29-year-old college professor, told me that while a case of mascfishing might have bothered him in the distant past, he's gotten over such hangups by now.

"Everyone is just playing at developing some sort of acceptable view of themselves, so I tend not to believe gender-based descriptors in dating profiles," he said. "Gender-based descriptors only serve as a turn-off the older I get. It's not about feminine versus masculine. In the end, love is so much more than a checkbox on a dating app."

I haven't been single for some time now, but I'd like to think that I've similarly evolved, and that I'd be less likely to cling to the more masculine aspects of my personality on a dating app. But my boyfriend and I did meet on OkCupid — and it was indeed the macho undertones of my profile that led him to reach out in the first place.

"Your love of football and ability to match me beer for beer is what drew me in," he told me. "But I've learned to equally love the way you worship Mariah Carey and occasionally speak in abbreviations."

Had I displayed my penchant for abbrevs or my spiritual connection with Mariah in my initial OkCupid profile, I can't help but wonder if he would have thought to message me in the first place. Yet much like an actual episode of Catfish in which the couple decides to stay together after all, sometimes you have to fall in love with the fantasy of someone before they win you over with who they really are.