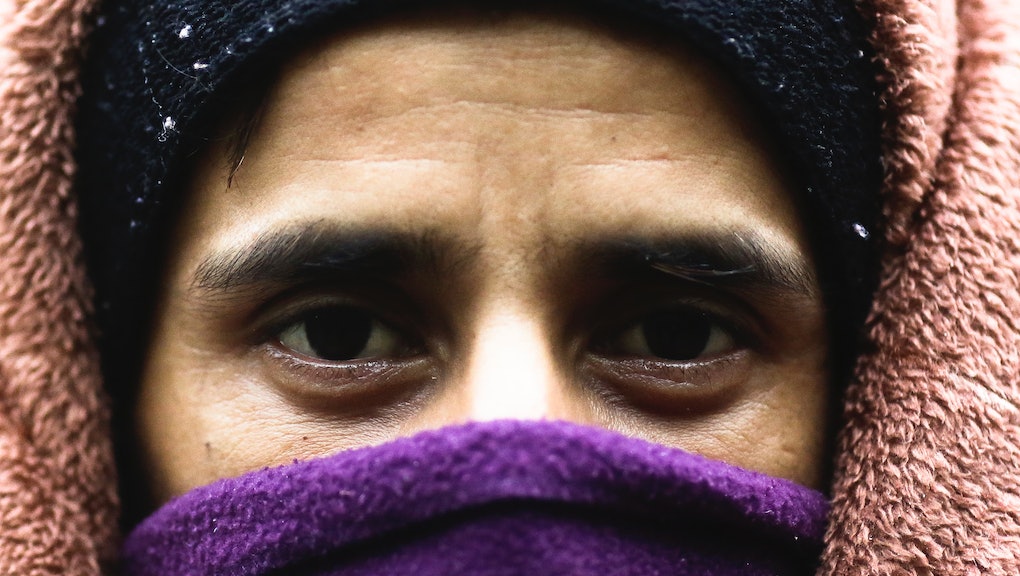 Here’s What Life Is Really Like for Refugees in Germany

BERLIN, Germany — Six months ago, Moustafa Abdulhay, 29, a Syrian born in Aleppo, gave up everything to come to Germany.

Abdulhay still vividly recalls the fateful conversation he had with his father in August 2015 when he decided to abandon his life in Syria, due to the increasing threat of the Islamic State, also known as ISIS. He fled the country, leaving behind his well-paying job teaching Arabic for the United Nations Relief and Works Agency.

"My father told me to come to Germany, because I would be able to find safety, work and build a new life for myself," Abdulhay told Mic in an interview outside a tent located on the grounds of Berlin's State Office for Health and Social Affairs, known by its acronym Lageso. The facility is the first point of contact for refugees once they reach the German capital, and has been described as the country's version of Ellis Island.

Abdulhay embarked on the dangerous journey taken by thousands of refugees entering Europe, traveling from Turkey to Greece, then up through Macedonia, Serbia, Hungary and Austria before finally reaching Germany. He said the entire trip took 20 days.

From the moment Abdulhay set foot in Germany, reality sank in. He said he was shocked to discover the miserable conditions at Lageso.

"When I arrived in Berlin, it was shocking to see what things are really like," Abdulhay told Mic.

The scene at Lageso is miserable. On a recent visit to the facility, refugees stood shivering as they waited outdoors for hours in long lines to receive food, tea and basic medical supplies. Barbed wire fences surrounded makeshift tents that served as temporary shelter for the refugees. Hundreds of new refugees gather each day in Lageso's main courtyard to submit their asylum applications, but many have been forced to wait weeks and even months for the German government to process their applications. Fights frequently break out amidst the confusion and chaos.

"These people have been through so much. And here is where we break them," Christiane Beckmann, a volunteer coordinator for the German refugee resettlement organization Moabit Hilft, told Mic dejectedly.

Abdulhay said conditions have been so bad since he arrived that part of him wishes he had never left Syria, despite the danger posed by ISIS.

"I gave up everything to come here from Syria," Abdulhay told Mic. "This is not what I was promised. Some days, I wish I had never come in the first place."

The looming battle over integration in Europe: Abdulhay is just one of over 1 million refugees who entered Germany last year, all with their own unique set of circumstances.

But his story serves as a cautionary tale of the severe challenges associated with the integration of refugees in Germany and across Europe, a looming crisis which German President Joachim Gauck described as the "biggest-ever test" the European Union has ever faced during the annual meeting of the World Economic Forum in Davos, Switzerland.

Until now, Germany has pursued a remarkably open-door policy toward refugees under the leadership of Chancellor Angela Merkel, taking in over 1 million refugees in 2015, by far the most in Europe. That influx has earned Germany praise as the leader on the refugee crisis in Europe but has also placed extreme strain on the country's resources, a fact that is immediately evident in places like Lageso. Germany's approach comes in stark contrast to countries like the United States, which has accepted a mere fraction of that number, in large part due to stark opposition from the Republican Party.

But Germany's days of openness are likely numbered, based on interviews with several policymakers and business leaders in Berlin. There is a growing feeling — among journalists, entrepreneurs and young people on the street — that the country is teetering on the brink, as Merkel faces increasingly vocal political opposition to her openness toward refugees.

That opposition is in part driven by real concerns about the German economy, which has slowed in recent months. Merkel's detractors argue that the country simply cannot sustain another influx of 1 million refugees in 2016.

There is also growing frustration that other countries, particularly in Central Europe, have turned away refugees and failed to share the burden of responsibility, despite Merkel's repeated calls for a unified European solution to the crisis.

The tide has also shifted in the wake of New Year's Eve attacks in the city of Cologne, where scores of German women were sexually assaulted in a series of coordinated attacks across the city, allegedly perpetrated by North African and Muslim migrants. In the wake of that attack, the far-right, anti-immigrant party Alternative für Deutschland called for Merkel's resignation, and Merkel has faced growing demands that the country take a harsher stance and close its doors to refugees and migrants.

Beckmann, the resettlement worker, says Germany must resist the urge to turn inward, particularly given the country's troubled history.

"We are the country that had the Nazis," Beckmann told Mic. "Despite that period of our history, people did not turn their back on us. So, now we too need to do more. We cannot turn our back on these people."

Dark days: But all signs indicate that Germany is likely to start to reverse its open-door policy in favor of a more restrictive approach in the coming days. Gauck, the German president, intimated as much in Davos, where he told a plenary session that the German government is "extremely likely" to introduce measures to limit the numbers of refugees entering the country this year.

For his part, Abdulhay says he will do everything in his power to prevent Germany from turning its back on refugees, despite the challenges he has faced trying to integrate in Berlin.

"I want to change Germans' perceptions of refugees, and show them that that they don't have to be afraid," Abdulhay told Mic. "We are smart. We are educated. We want to work."

Indeed, according to a United Nations Refugee Agency survey from 2015, the overwhelming majority of Syrian refugees who enter Europe — 69% — are millennials between the age of 18 to 35. Eighty-six percent also have secondary or university-level education.

Indeed, according to a United Nations Refugee Agency survey from 2015, 71% of Syrian refugees in Greece — the primary entry point for refugees coming to Europe — are millennials between the age of 18 to 35. Eighty-six percent have secondary or university-level education.

Abdulhay also said he remains optimistic about the future, even in light of the harsh climate for refugees which has emerged in the wake of the Cologne attacks. He says he dreams about one day learning German fluently enough to become a language teacher again in Berlin.

In the meantime, he has one message that he wants everyone in the country to hear.

"Don't turn your back on refugees."