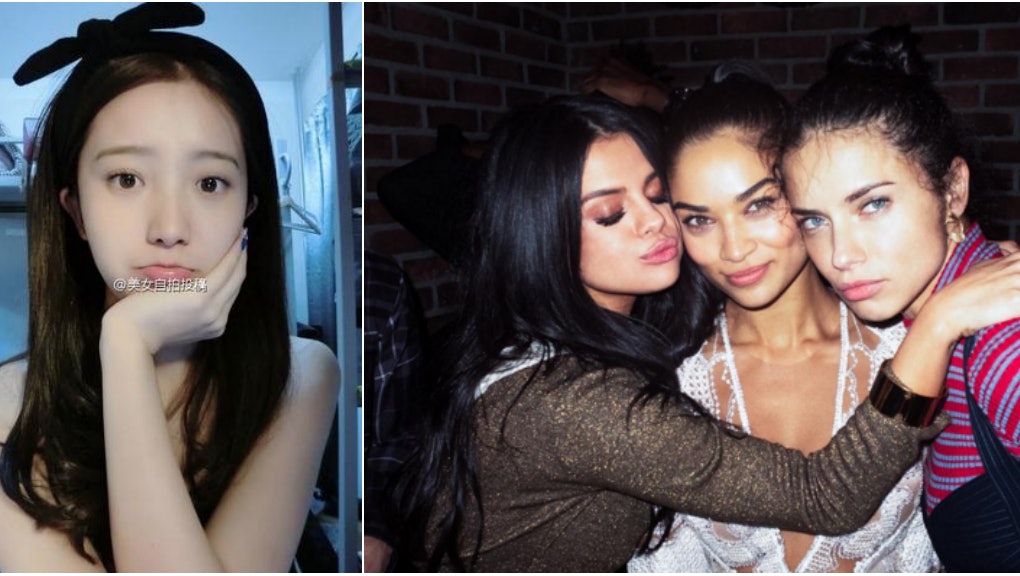 What Selfies in America vs. China Can Tell Us About Beauty Standards

These days, any self-respecting person knows how to take a selfie — after all, we shoot millions of self-portraits a day and in the two years since Oxford Dictionaries crowned "selfie" as its word of the year, we've gotten pretty good at capturing our best angles on screen.

But what actually constitutes a good angle — or a good selfie overall — is rooted in what we consider beautiful, and that varies greatly by culture. "Selfie culture," as it's called, may be global, but our beauty standards are not.

Nowhere is this difference more obvious than on Chinese social media, where you won't find any of the contouring, lip-lining or thighbrows that fill Instagram feeds in the United States. In China, it's all pale skin, big eyes and rosebud lips.

The fair-skinned standard: There are overlaps in how each nationality shoots its self-portraits: Chinese girls take photos at an angle to slim their faces, just like selfie queen Kim Kardashian West recommends. Chinese women are also influenced not only by their own country's ideals but also those of neighboring East Asian countries like Japan and South Korea, all of which favor slim figures and youthful, innocent-looking beauty.

Combined with imported Western beauty ideals like large breasts, these influences have fused to create a very definite Chinese physical ideal with little wiggle room for women who fail to meet the standard.

"Chinese beauty ideals basically come from the media: TV shows, celebrities. A lot of Chinese beauty ideals are quite Western," Chinese culture expert Janny Chyn, who provides cultural immersion tours through her company Shanghai Pathways, told Mic. "The main difference is that we like white skin."

Many women in China strive to be baifumei: pale, rich and beautiful (with a heavy emphasis on pale). The ultimate baifumei is actress Fan Bingbing, adored and emulated for her translucent white skin, large eyes and "melon seed" (oval-shaped) face.

The preference for white skin dates back 2,000 years to the Han dynasty, but has arguably become more acute in the age of social media and a booming beauty industry. Whitening products account for 70% of online searches for cosmetics in China, according to search giant Baidu. Compare that to a 52% rise in searches for contouring in the United States in 2015.

"There is a strong standard of beauty in China, and it requires you to be as white as possible, with big eyes," Thibaud André, consultant at Daxue Consulting in Beijing, told Mic.

Cute wins out over sexy: Flick through Instagram in the U.S. and you'll likely see a lot of flesh, especially in the summer. Everybody from Kardashian West to Drake has been known to get a little thirsty on social media. Not so on Chinese social networks like Weibo, where big eyes, bunny ears and cute slogans abound. And it's not just among teenagers.

"The big difference is that we want to be cute. You will see women pretending to be teenagers when they are grown-ups," said Shanghai Pathways' Chyn. "Pretending to be cute is never offensive. It's more controversial to be sexy. If you're cute, no one can disapprove."

One Chinese guide to taking selfies says "innocent and cute" photos will always prove the most popular and are also easy to take. That means less vamping and less makeup aimed at overt sexiness. While girls all over the Western world might have been sucking on bottle caps last year to get Kylie Jenner's lips, women in China are more likely to underplay this feature, using lighter or coral lipsticks.

This desire to be cute also manifests itself in big, puffed-out hamster cheeks, a sweeter alternative to the more overtly seductive "duckface."

When skinny trumps curves: There's no denying that Americans feel huge pressure to be skinny, what with 20 million American women experiencing a clinically significant eating disorder at some time in their lives. Social media plays its part in promoting skinniness, glorifying thigh gaps and spreading "fitspo" slogans. But the recent movement to embrace plus sizes, along with the popularity of curvier celebrities like Beyoncé, Nicki Minaj and the Kardashian crew, has brought a bit more variety to social media that makes space for curves. (See: "belfies.")

Chinese social media, on the other hand, sees the glorification of skinniness above all else. This has led to a number of selfie trends, including one challenge to twist your arm behind your back to touch your belly button and another to stack coins on your collarbone to demonstrate thinness.

And while America isn't perfect — a curvy body is still more celebrated when it includes a slim waist — there is at least some diversity in the types of bodies deemed attractive.

"Americans prefer a fit body, a fit figure. It doesn't need to be skinny, it doesn't need to be chubby but it needs to be fit and healthy looking... In China I only hear, 'Girls should have really thin bodies,'" said one participant in an Asian Beauty Secrets video about American vs. Chinese beauty standards.

Who needs makeup when you can digitally edit your selfies? Selfie trends like contouring and strobing have changed what products many American women have in their makeup bags, as we prioritize looking "camera ready."

Not so in China. Although the cosmetics market is growing, women there still wear far less makeup than girls in the states, according to André. There's little need for special selfie-ready makeup when you can use apps to change what you look like instead.

"Our selfies are very high-tech," Chyn said. The functions on Photoshop-like apps lay users' beauty desires bare: The most popular Chinese beauty app, Meitu Xiuxiu, allows you to whiten your skin, slim your face and make your eyes impossibly huge. By contrast, Facetune, an app used by Tyra Banks, focuses on whitening your teeth, smoothing out skin and applying more makeup.

Understanding the pressures women elsewhere face might be just the thing to make us examine where our own beauty ideals come from. Maybe we'll even put down the bronzer, delete the Photoshop app and face the world as we really are. Just maybe.