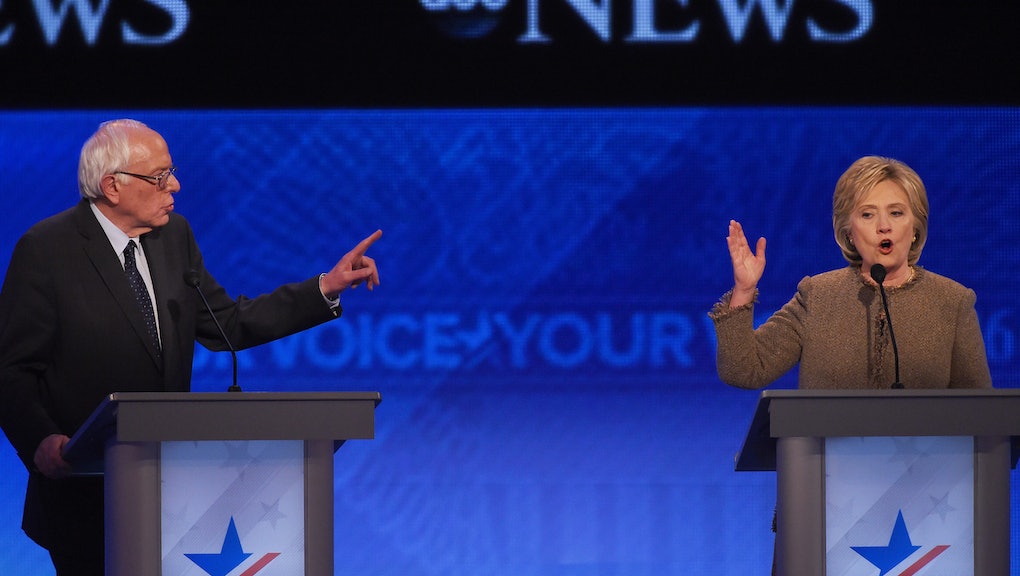 As the two frontrunners for the Democratic presidential nomination, former Secretary of State Hillary Clinton and Vermont Sen. Bernie Sanders, converged on Iowa to make their final appeal to voters before the state caucus on Feb. 1, two moments unfolded — one for each candidate — that offered stark illustrations about the state of the race and the sharp divide between supporters in each camp.

For Bernie Sanders, it was at a Monday rally in Iowa Falls. The candidate was seeking stories of people whose only source of income was social security — which Sanders estimated at about $12,000-$13,000 a year. One woman, who said she lived off of $10,000 a year, said she wore the same shoes for years and could not afford to fully heat her home in winter. Sanders said that similar stories played out in his home state of Vermont as well.

But the staid atmosphere, vaguely resembling a public television broadcast, exploded into high drama when an unnamed woman to Sanders' left took the microphone. Sobbing throughout her brief monologue, the woman said she was barely getting by due to disabilities.

"It's so hard to do anything to pay your bills, you're ashamed all the time ... When you can't buy presents for your children it's really, really, really hard and I work three, four, five jobs sometimes, always minimum wage," she said, her voice shaking. "I have a degree, divorced and it's just — I'm waiting for disability to come through so my parents have to support me. It's just hard."

The crowd clapped as she finished and a somber Sanders thanked the woman for her story. "It is not easy for people to stand up and say that," he said. "The truth is you can't make it on $12,000, you can't live in dignity on $10,000 or less. And millions of people today are in that position."

Hillary Clinton faced her last chance to win over caucus voters in a live national audience Monday evening at a Democratic candidate forum at Drake University in Des Moines. With polls showing an increasingly tight race, participant Taylor Gipple was unsparing in his assessment.

"It feels like there's a lot of young people like myself who are very passionate supporters of Bernie Sanders and I just don't see the same enthusiasm from younger people for you," he said, with Clinton nodding. "In fact, I've heard quite a few people my age that think you're dishonest."

Clinton, with customary cool, parried by telling Gipple she had many young supporters working for her in the state, and that young people joining the political process for any reason was ultimately a good thing. She then fell back on her own decades in public life as a source of the potential mistrust.

"If you're new to politics, if it's the first time you've really paid attention, you go 'Oh, my gosh, look at all of this!' and you have to say to yourself, 'Why are they throwing all of that?'" she said. "Well, I'll tell you why — because I've been on the front lines of change and progress since I was your age. I have been fighting to give kids and women and the who are people left out and left behind the change to help them make the most of their lives."

The two Iowa moments spoke to a number of the key issues illuminating the race in the final days before primary voting begins. For Sanders, the woman in Iowa Falls underscored his message of reducing income inequality and lent additional credibility to his campaign for a "political revolution." In debates with Clinton, Sanders has repeatedly criticized Clinton, whose largest donors have historically been some of the very banks that contributed to the financial crisis.

"I do not believe that you can get huge speaking fees from Goldman Sachs and then, with a straight face, tell the American people that you're prepared to do what is necessary to take on the greed and illegal behavior on Wall Street," Sanders told the Washington Post in an interview published Sunday. "I don't think people think that passes the laugh test. ... Why do special powerful interests give you money? Are they dumb? I don't think so."

While in debates, Hillary Clinton has promised to aggressively police Wall Street, the cutting charge by Sanders reveals one of the central weaknesses of her campaign going into Iowa, and one that has dogged her since her loss to Barack Obama in the state eight years ago: a lack of trustworthiness.

While Clinton's long career in public life may create some space for shifting positions, her record of evolution on issues like LGBT rights, the Trans Pacific Partnership, gun control and others, looks bad next to Sanders, who has been comparably consistent in his major talking points. "A handful of banks and billionaires control the economic and political life of America. ... America is becoming less and less of a democracy and more and more of an oligarchy." That was Sanders — in 1974.

Polls show that voter mistrust continues to weigh on Clinton's candidacy, giving credence to Gipple's observation. A Jan. 12 Quinnipiac University Poll found that 66% of Iowa voters considered her "honest and trustworthy," with 29% saying otherwise. The same poll showed Bernie Sanders at 93% and 3%, respectively, for the same metrics.

"Sen. Sanders' surge seems based on the perception by Iowa Democrats that he is a better fit for Iowa," read a Quinnipiac University Poll press release. "They see him, by solid double digit margins as more sharing their values, more honest and trustworthy and viewed more favorably overall than is Secretary Clinton."

The value of likability is not something to be discarded lightly, as such a quality was widely cited in the run up to voting between George W. Bush and Al Gore's 2000 presidential race. In that contest, Bush, who won by a razor thin margin, was viewed as the more personable candidate.

With Sanders opening up a lead in the New Hampshire primary, a loss in Iowa for Clinton would almost certainly guarantee that the race stretches on into Super Tuesday and beyond.

If that does happen, these two moments in Iowa will be what to remember.