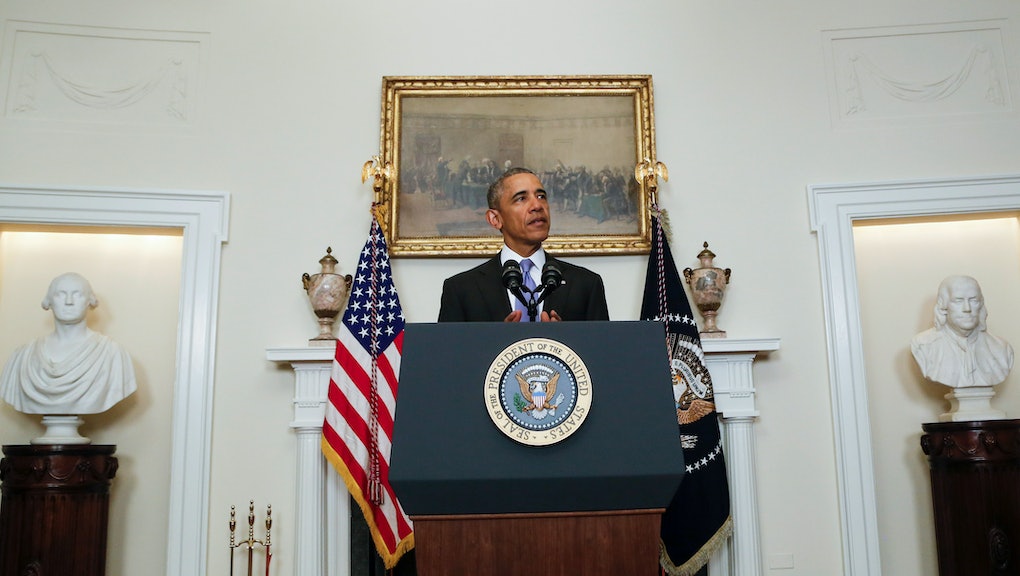 Obama Bans Solitary Confinement for Young People in Federal Prison — But Is It Enough?

On Monday, President Barack Obama announced a ban on the use of solitary confinement for juvenile offenders in the federal prison system.

In an op-ed in the Washington Post,  the president criticized the overuse of the practice and the corrosive effects it has on the mental health of young people and adults alike in the corrections system.

The announcement of the new ban is one of many new guidelines that the president has adopted based on the recommendations of a Justice Department review of the use of solitary confinement across the prison system that he requested last summer. The directive to end youth solitary confinement is in line with a provision of a major criminal justice reform bill currently pending in the Senate, but as an executive action it goes into effect without any need for congressional approval.

Why it matters: The new ban is being hailed by criminal justice reformers as a significant step forward in making prison less debilitating for juvenile offenders.

The new ban "will save thousands of prisoners from needless suffering and permanent psychological damage," David Fathi, director of the American Civil Liberties Union's National Prison Project, said in a statement.

There's an abundance of scientific evidence and growing public awareness of how solitary confinement can wreak havoc on the mental health of the those subjected to it. Last March, Supreme Court Justice Anthony Kennedy said, "solitary confinement literally drives men mad."

The effects of extreme deprivation are all the more harmful for young people, whose bodies and brains are still developing.

"Adolescent brains are still developing. We know that putting them in a situation where their senses are isolated is something that is traumatic for them and that it exacerbates mental health conditions," Dana Shoenberg, deputy director at the Center for Children's Law and Policy, told Mic in an interview last May. "Keeping people in a locked room also means they're not getting exercise, they're not getting sunlight and other things that teenagers' bodies need. It's harmful both physically and from a mental health perspective."

The toxic effects on young people have been documented extensively.

A 2012 Justice Department report found that, "Nowhere is the damaging impact of incarceration on vulnerable children more obvious than when it involves solitary confinement." The report surveys investigations that find that "juveniles experience symptoms of paranoia, anxiety and depression even after very short periods of isolation," and that "among the suicides in juvenile facilities, half of the victims were in isolation at the time they took their own lives, and 62% of victims had a history of solitary confinement."

Not far enough: As important as the ban is, there's huge limitations to its effect on nationwide use of the practice. It only affects the use of solitary confinement on juvenile offenders in federal facilities — but a vast majority of people in the prison system in the United States are in local and state facilities, and this new executive action will have no direct impact on them.

According to the federal Bureau of Prisons, there are fewer than 30 people under the age of 18 in the federal prison system. But juveniles that are vulnerable to solitary confinement in either state adult facilities or state juvenile facilities rank in the tens of thousands.

John Pfaff, a professor at Fordham University School of Law who specializes in criminal sentencing, tweeted that he was worried that the "collateral costs" of the announcement would include complacency toward ending the practice on a state level.

Obama's executive actions will set an important precedent, and policymakers on the state level will take notice, but there's nothing guaranteeing that they'll act in accordance with it. In order to ban the use of youth solitary confinement in state facilities, criminal justice reformers will need to focus their energy on agitating at the local level. It won't be quick, and it won't be easy.