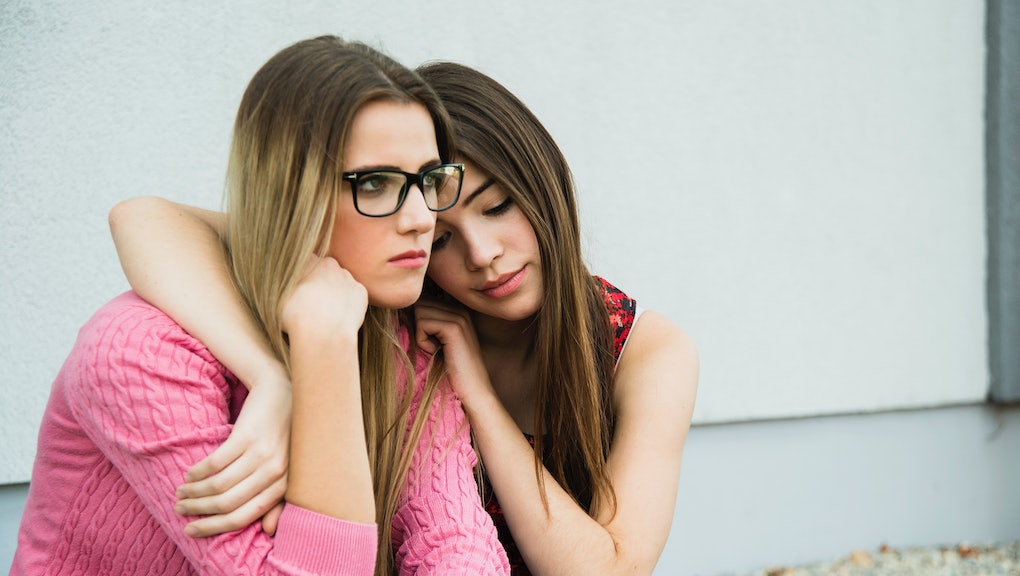 The 5 Stages of Helping a Friend Through Grief

As we age, we become all too familiar with loss. Whether a coworker loses their mother, a college roommate's brother passes or a childhood friend's father dies, as we progress through our twenties, supporting those close to us through grief becomes an increasingly common process. We need to learn not only how to handle a friend's grief, but how to handle it well.

When dealing with a friend's grief, it's not uncommon to feel totally out of your depth, especially if you haven't experienced a significant loss of your own. And while platitudes like, "Every cloud has a silver lining," and, "Everything happens for a reason," might seem like helpful things to say to someone who's suffering a loss, they can often have the opposite intended effect. As writer Tim Lawrence once wrote, such platitudes are "the kind of bullshit that destroys lives."

To find out what is and isn't helpful to say to a grieving friend or colleague, Mic asked 20-somethings who had recently suffered a loss about what helped them and what they actually needed from their friends during their grieving process. For anyone who has ever struggled with the wording of a card, offered condolences via emoji or gone radio silent during a friend's time of need, these are the five stages of helping a friend through grief.

If you are close enough to an individual to even ask yourself, "Should I say something to them because I know their loved one just died?" the answer is absolutely, yes, you should.

"I believe, if you care about someone, and you know they are grieving, it is your obligation to acknowledge that grief. You want them to know that they are not alone," Kelly*, 27, whose mother died recently, told Mic. "It really all comes down to [that] — just acknowledge the loss. I still find myself bothered, wondering, 'Why didn't so-and-so say anything to me when my mother died?'"

Dolly Phillips, the clinical coordinator of school and children's programs at Our House Grief Support Center in Los Angeles, agreed. "Silence around death and grief can be as painful as saying the wrong thing. Just acknowledging a death can be very comforting," Phillips told Mic.

In today's plugged-in world, condolences don't even necessarily need to come in person or over the phone to be heard. "If you don't have the person's phone number or aren't particularly close, I don't think social media has to be taboo or disingenuous," Alexis*, 26, whose father died three years ago, told Mic. "If it's your best friend or someone close in your social circle, a call, text [or] card is more appropriate though. So what if you feel awkward? It's a moment to put aside your own self-consciousness and open your heart up, man."

2. Please, Say Something You Really Mean

Helping your friend through loss isn't exactly a time to be "on script." In fact, spouting off a list of Hallmark-worthy cliches is bound to make your friend feel even more depressed and alone.

"I find that my patients often flinch in the face of the cliches people turn to when interacting with the bereft," Millet Israeli, a New York City psychotherapist specializing in grief and loss, told Mic. "Phrases like, 'Just give it time,' 'Everything happens for a reason,' or, 'We are never given more than we can handle,' feel like a punch in the gut."

While such cliches might be intended to cheer the bereaved person up, they often have the opposite effect. "Do not try to put a positive spin on the situation," Kelly advised. "Grief is a natural, healthy response."

For some, even phrases like "I'm sorry for your loss," can seem impersonal. "When people said that to me after my brother Ben died it felt insincere, disconnected and detached," Erica*, 25, whose brother died when she was a teenager, told Mic. "'I'm so sorry that Ben died,' 'I'm so sorry that you lost your brother who you were so close to,' 'I'm so sorry this happened,' or even just, 'I am so sorry,' is so much better than referring to someone's untimely death as a 'thing.' I think it's scary and hard for people to be too real with the mourning person."

The mourning process is an important time to be real — and to know your audience.

"A few of my mother's friends have sent me memes with peaceful pictures with some kind of garbage about how your loved one is the whisper in the trees now," Kelly said. "These women don't know me personally, so they have no clue that this is the kind of stuff that makes me roll my eyes so hard I pull a muscle. Some grievers might appreciate that kind of stuff, but I would recommend against it unless you are very close to the griever and know they would like it."

Once you've acknowledged the death of a loved one, it's time to actually sit down with your friend and talk to them.

"Because many are uncomfortable with loss, we tend to avoid [it] or to try and fix [it]. Don't try to fix your friend's grief," Israeli told Mic. "Be willing to sit in silence if need be. Ask open-ended questions, 'How are you doing?' 'Is there anything I can do to help?'"

Phillips suggested checking in with your friend and asking how they're doing with the mourning process. "Say something like, 'How have you been since the death of ________?' Then listen," she told Mic. "Acknowledge their grief — sadness, anger, changes in sleeping or eating — and encourage them to take care of themselves. Tell them you're there to support them."

Above all else, don't make your friend's loss about you by bringing in your own issues or comparing it to the time you experienced your own loss. "When people compare your grief to theirs, it turns the conversation away from your loved one, and you feel a little silenced," Erica said.

Grief doesn't have a timeline or an expiration date, so checking in with your friend weeks, months or even years down the line is important, especially on challenging days such as anniversaries.

"I think reaching out to friends at especially challenging times can be very helpful," Israeli told Mic. "A patient of mine whose father died was very moved when a friend contacted her on Father's Day to check in. These are the gestures people remember."

4. Actually Do Something You Say You Will

The grieving process is a period in which people can feel like they're barely keeping it together. Everyday tasks like grocery shopping and going to work take tremendous effort, and the idea of having anything resembling a normal social life seems beyond human ability.

With this in mind, the least helpful phrase you can tell your grieving friend is, "Let me know if you need anything." The truth is they won't let you know.

"Unless someone is very trusted by you, it's unlikely you will follow up with them, and it's harder if their offer is totally vague," Erica said. "It means nothing."

What matters is actually following through with your offer. "My dear friend Ellie stayed with me from the time she came over when I found out that my brother died, for days and days," Erica said. "She made sure I was never alone — unless I wanted to be, which was basically never. If she wasn't with me she would communicate with me regularly. I needed that so bad, especially since everyone in my crazy family was going through their own shit."

Even the simple act of bringing food to the bereaved can be both comforting and helpful. "Send food!" Phillips said. "Seriously, it's so cliche, yet I was really surprised when on the day of my mom's death a childhood bestie sent huge trays of food to my sister's house, where our large family was gathering."

If you can't think of any grand gesture, just being there for your friend IRL is valuable in itself. Ryan*, 25, told Mic that the day his stepfather died of skin cancer, his two best friends came over to spend time with him. "Looking back, I can't remember what we said or did, but I remember it was just nice knowing they were there," he said.

Yes, dealing with death can be awkward, and consoling your friend as they work through the pain of losing someone incredibly important to them can often be weird and uncomfortable. Still, the worst thing you can do is withdraw from them (unless they specifically ask you to do so).

"The bereaved who come to see me most often feel abandoned or neglected by their friends," Israeli explained. "Perhaps their friends feel too awkward to make themselves truly available. Or maybe they think it better not to broach the topic for fear of resurfacing the pain. In my experience, this tends not to be the case. The grieving want to know you are aware of their suffering and are willing to be present with their pain."

After enough time has gone by, the weird quips about your day or simply making dinner together will restore some normalcy into your friend's life. If you and your friend usually hang out weekly, keep up that tradition once they feel ready to go back to their regular schedule.

"I did not want to be alone at all," Ryan said. "I know everyone grieves differently, but I felt the presence of my friends in my life was a great help. Grief is a burden and just having people act normally around you helps to lift it just a little."

By checking in with your friend regularly, you can maintain a sense of normalcy while simultaneously making sure they're doing OK. "Often folks think we're going to hurt somebody by bringing it up, but again, it's the silence and lack of recognition that's painful," Phillips said.

And when in doubt? Just ask your friend what they need. "Everyone's grief is different," Phillips added. "Offer to visit, invite them out, but don't push if they aren't ready. Let your friend be the guide."