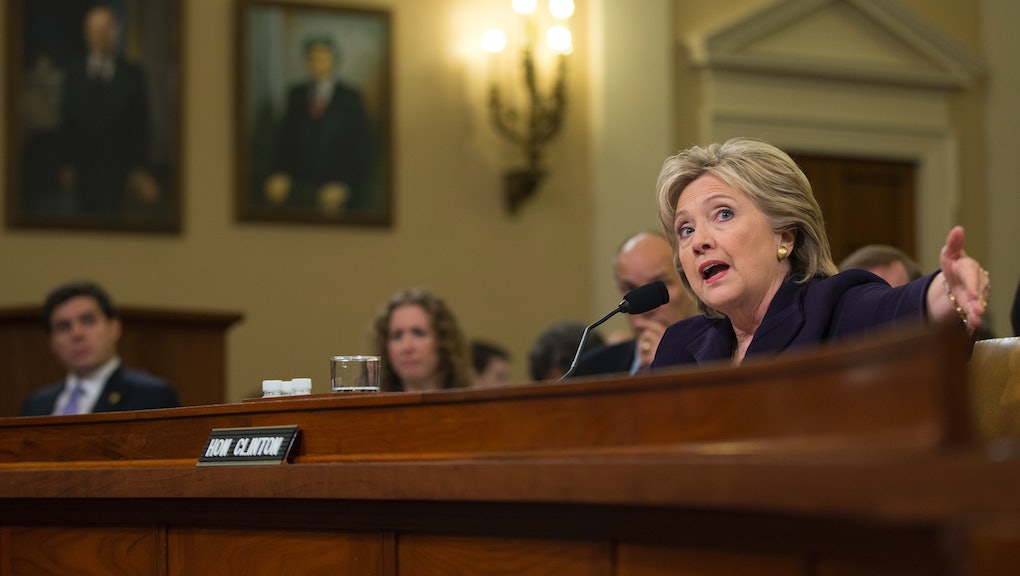 Hillary Clinton’s Role in Benghazi: What You Need to Know

Ever since the September 11, 2012, attack of a United States outpost in Benghazi, Libya, that left four Americans killed, questions have continued to arise over the role of then-Secretary of State Hillary Clinton in the attack — or rather, a potential failure to do anything about it. However, is Clinton complicit in the Benghazi attack?

Following the attack, which included the death of the U.S. Ambassador to Libya, Chris Stevens, United Nations' U.S. ambassador, Susan Rice, explained on ABC's This Week that the strike was, in part, a response to protests to an anti-Islam video, rather than a terrorist attack.

By not formally labeling it as a terrorist attack in the offset, Republicans and conservative media outlets (Fox News, in particular) put forth the idea that Benghazi was a "cover-up" by the Obama administration. Essentially, the claim is that the administration did not heed proper security warnings before the attack, which lead to military support coming in too late. This was aided by the recovery of Stevens' personal journal after the assault by CNN, which the broadcasting network reported that he wrote he was concerned about security in Libya in the months prior to the attack.

Where does Clinton play into this? Well, aside from being the Secretary of State — an important cabinet position — she later took responsibility for the security at the compound, or rather, a lack thereof. "I'm in charge of the State Department's 60,000-plus people all over the world, 275 posts," Clinton said, in an interview with CNN. "The president and the vice president wouldn't be knowledgeable about specific decisions that are made by security professionals. They're the ones who weigh all of the threats and the risks and the needs, and make a considered decision."

Since the terrorist strike, investigations have detailed failures on the end of the State Department and the intelligence community, which included a Senate Intelligence Committee report in January 2014 that said both were at fault for failing to prevent the attack, according to the Washington Post. However, there was only one specific reference to Clinton throughout the report.

"The document contains only one mention of then-Secretary of State Hillary Rodham Clinton, whom the panel's Republicans name as the official who should ultimately be held responsible for the failures in Benghazi," Adam Goldman and Anne Gearan wrote for the Post. "Even so, the report is likely to provide fodder for both Republicans and Democrats as Clinton ponders a possible presidential run in 2016."

With the expectation to uncover more evidence, Republicans then formed the House Select Committee on Benghazi in May 2014, to examine government policies related to the consulate attack. As State Department officials responded to the request, it was revealed that Clinton's State Department email account had no correspondence.

As a result, the State Department formally asked Clinton to turn over her emails from her private server, which started the now-infamous email scandal. Of the 50,000 pages of emails Clinton provided to the State Department, roughly 900 were in reference to Libya and were later sent to the House Committee.

Clinton has been investigated thoroughly by the House Committee, most recently at a Benghazi hearing in October (by then, she was a presidential nominee). While it could have stood to tarnish her presidential campaign, she staved off overly inflated accusations that seemed to fit the Republican narrative of the story — that she was the most responsible, and was negligent to respond properly.

"Clinton was able to deflect responsibility for initially incorrect assessments of the motivation of the attack, stating the State Department was relying on information from the intelligence community," Mic's Stefan Becket wrote.

Overall, the most recent Republican accusations on Benghazi — and, broadly, the email scandal — have proved to be more of a concerted effort by Republicans to hurt her upcoming candidacy.

"They've done so partly out [of] political expediency — they think it's a great way to attack Clinton's presidential campaign — and partly out of a genuine belief that the administration is covering up the truth," Zack Beauchamp and Carlos Waters wrote for Vox.

In the aftermath of Benghazi and the email scandal, Clinton's poll numbers have demonstrated an increased lack of trust in the former Secretary of State from Democratic and independent voters. According to a CNN/ORC poll of registered voters, 58% of self-described independents, in addition to 31% of Democrats, believe Clinton had done something wrong by having a private email server.

It has helped, however, that her main competition for the Democratic nomination — Vermont Sen. Bernie Sanders — has not taken any media bait with the scandal, and, by association, Benghazi.

Regardless, it's likely that the Benghazi attack will be brought up again by the Conservative media and GOP hopefuls throughout the election cycle, particularly when issues of foreign policy are brought to the forefront. Clinton's response so far, though, has shown that she's able to stand her ground through extensive investigations, and that should put her Democratic supporters at ease.