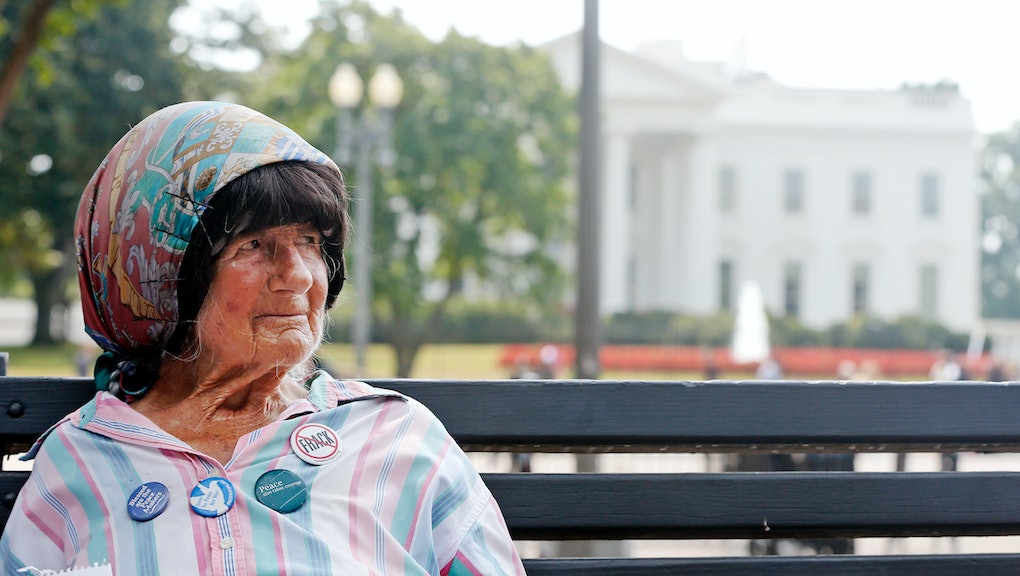 Concepcion Picciotto, Responsible for the Longest Act of Political Protest, Has Died

As the U.S. continues to work toward increased equality, being patient can be difficult — change doesn't happen overnight. None knew this to be true more than Concepcion Picciotto.

Picciotto, who also went by Conchita or Connie, held a peace vigil outside the White House for over 30 years in the longest-running act of political protest until she died on Monday. Picciotto was around 80 at the time of her death in a Washington, D.C., homeless shelter, the Washington Post reported.

Picciotto immigrated to the U.S. from Spain in the '60s and first settled down in New York City, where she found a job as an interpreter at the Spanish Embassy. According to a 1989 article by the Associated Press reporting on what was then Picciotto's seven-year vigil, Picciotto married and had a daughter before her "classic American dream" fell apart: Picciotto divorced her husband, lost custody of her daughter and found herself in D.C. without a home. Disenchanted by the United States' false promises, she made Lafayette Park her site of protest.

"My husband had a very vicious and cruel lawyer," she told the AP at the time. "I was railroaded by the courts. I felt that I was persecuted."

Though she was motivated by personal injustices, Picciotto became a voice for anti-war efforts and the campaign against nuclear weapons. According to a Post profile in 2013, Picciotto's camp grew larger after she met protesters William Thomas and Ellen Benjamin. The three joined forces and later succeeded in affecting change when they circulated a petition that spurred a District vote on nuclear disarmament in 1993.

Picciotto's calls for peace took on added significance over the decades as the U.S. moved out of the Cold War and into conflicts in the Middle East; she's seen the presidencies of Ronald Reagan through Barack Obama. Still, Picciotto has always had a similar message. The Post's profile remarks on the handmade signs that flanked her encampment, reading "Ban all nuclear weapons or have a nice doomsday," and "Live by the bomb die by the bomb."

Picciotto has been a controversial figure since she started protesting in the '80s. In its 1989 profile, the AP wrote that she was used to harassment from authorities and passersby who thought she was crazy or anti-American. (In the story, police denied they harassed Picciotto.) "Connie's rendition of events is slanted at the very least and is a pack of lies at the most," police Lt. Hugh Irwin told the newswire at the time. "And it's because her world is so small sitting on the sidewalk, associating with the people she does."

More recently, others threw doubt at Picciotto's mental state, especially when her messages strayed from the protest for peace and veered toward her own persecution at the hands of the U.S. government. Aside from her perceived disenfranchisement in the custody case for her daughter, Picciotto blamed the government for her physical health issues, according to the Post. She was also known for perpetually donning a helmet under her headscarf.

Picciotto's world may have been small, and her facts shaky, but she left a feat of persistence in her wake, if nothing else.

"If all the madness that you are protesting did stop in your lifetime, what would you do?" DCist asked Picciotto in 2005. She replied, "I don't know."