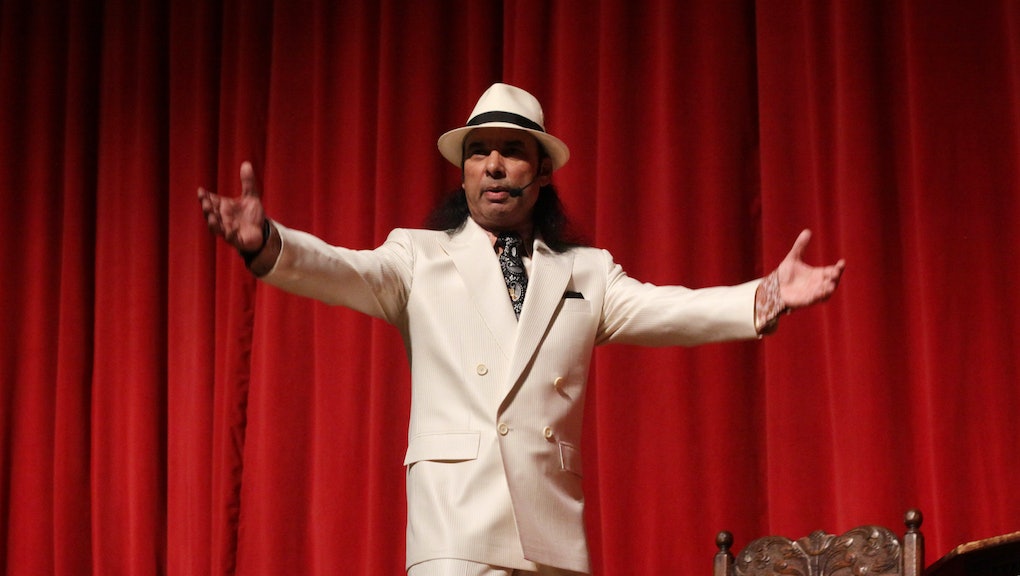 The jig is up for Bikram Choudhury, founder of the popular eponymous method of hot yoga.

A Los Angeles jury has ordered Choudhury to pay $924,000 to his former lawyer, Minakshi Jafa-Bodden, who alleged she was fired for attempting to investigate sexual assault claims against Choudhury. Jafa-Bodden also claimed Choudhury subjected her to "severe, ongoing, pervasive and offensive conduct."

Jafa-Bodden accepted her position as head of legal and international affairs for Choudhury and the Bikram Yoga entities in 2011. In her complaint, she alleged that the mistreatment from Choudhury began shortly thereafter.

Horrific treatment of women, including his own employees: The lawsuit alleged that Choudhury repeatedly referred to women as "bitches," "fucking bitches," "fat bitches" and "stupid bitches," and that he "repeatedly made offensive and vulgar sexual gestures including placing his fingers in a circle and inserting the fingers of his other hand into them, simulating intercourse; licking his fingers, sticking the fingers in the air and licking them, simulating oral sex."

"Bikram Choudhury also permitted and encouraged his male friends from overseas to treat his female staff and students as if they were chattels there for his and his friend's enjoyment, sexual gratification and pleasure," the lawsuit states.

Jafa-Bodden claimed that Choudhury made female employees brush his hair and give him massages, and that she'd have to conduct meetings with Choudhury while he received those massages. She also claimed he required her to meet with him in his hotel room, and that at one such meeting, Choudhury "climbed into bed and patted the bedspread next to him," indicating that Jafa-Bodden should join him.

Disparaging remarks about other minority groups: According to the lawsuit, Choudhury made offensive remarks regarding the LGBT community, including "AIDS is caused by gays, it is the truth," and "but these fucking asshole guys love me, they love Bikram."

He allegedly claimed black people "just don't get my yoga," and that Hitler had the right idea with the Jews, but "was just not efficient enough." He allegedly referred to an LA studio owner "that fucking stupid Korean bitch."

In one instance, Jafa-Bodden received word that Choudhury had done something "of a sexual nature" to a female trainee during an Acapulco training session. "Plaintiff was later told that it was 'resolved' and that it was 'best' if she 'not look into it any further,'" the lawsuit states.

Jafa-Bodden said that on March 1, 2013, Choudhury told her that if she didn't resign right away, "she would be terminated and that it 'would be very bad for her.'"

"The entire environment was extremely hostile and threatening," the lawsuit states, "and Plaintiff feared for her own safety as well as the safety of her daughter."

This isn't the only time Choudhury has been formally accused of disturbing behavior against women. In September, a group of women accused Choudhury of sexual assault and emotional abuse, according to NBC 7 San Diego. The first lawsuit is set to go to trial in April, according to the Associated Press.

One of them, Dana McClellan, claims Choudhury raped her during a 2010 training session. "Bikram took away my passion," she said, according to NBC 7. "He took away my love for yoga, which is really sad. He destroyed it."

Choudhury vehemently denied the claims, telling CNN that he "never assaulted them."

"Women like me. Women love me," he told CNN. "So if I really wanted to involve the women, I don't have to assault the women."

As for the present ruling, Jafa-Bodden's lawyer, Carla Minnard, no doubt spoke for many when she said, according to the AP: "It's an enormous vindication."