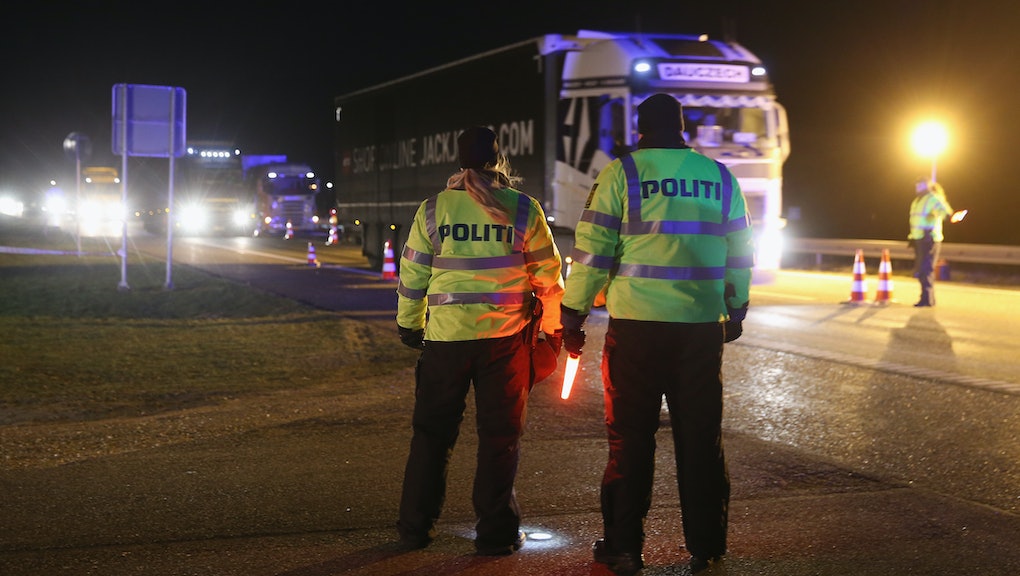 Denmark Just Approved a Law to Seize Possessions From Refugees

Refugees fleeing war zones in Syria and other countries may soon find out war isn't the only manner of "theft from those who hunger and are not fed, those who are cold and are not clothed."

The government of Denmark has approved a plan to strip migrants arriving in the country of their valuables, the Guardian reported.

According to the paper, Danish police will be empowered to search any asylum seekers upon arrival and seize any objects "that have no sentimental value" worth more than 10,000 kroner (approximately $1,456). Proponents justified the plan as necessary to help fund the cost of caring for the refugees.

Switzerland and the German governments of Bavaria and Baden-Württemberg already have similar policies in place enabling authorities to take refugees' possessions, according to Politico.

The law also requires refugees to wait three years before they can apply to be reunified with their families, an increase from the previous status quo of one year, reported Al-Jazeera.

The BBC reported that Denmark is expected to receive 20,000 migrants in 2016, up from 15,000 in 2015. In 2015, more than 1 million migrants arrived in Europe seeking asylum, many from conflict-ridden nations like Syria, Afghanistan and Iraq.

And given the destitute circumstances of many migrants, it's possible the assets seized may be some of the migrants' last remaining possessions. Refugees of the Syrian civil war are particularly vulnerable, noted the Washington Post, as many civilians fleeing war-ravaged regions had to sell most of their remaining valuables to afford extortionate black-market travel fees out of the country.

In September 2015, the U.N. High Commissioner for Refugees identified chronic poverty among the estimated 4 million Syrian refugees who have fled to neighboring countries as a key driver of migration to Europe.

"Refugees face horrible living conditions and restrictions in the legal regimes for refugees in the countries where they live," UNHCR Middle East and North Africa Bureau Director Amin Awad said in a statement. "When people don't have proper shelter and are living on 45 cents a day of course they want to move ... Syrians are checking out from the neighboring countries."

"Refugees are having to adopt negative survival strategies — like child labor, dropping out of school, begging and survival sex," he added. "They need much more support."

Tensions over the refugee crisis have reached a boiling point in much of Europe, fueled in large part by popular resentment of resettlement plans.

On Monday, Reuters reported that European Union interior officials are threatening to expel Greece from the no-passport travel zone currently enjoyed by most E.U. member nations. According to the International Organization for Migration, more than 80% of the refugees traveling to Europe enter through Greece.