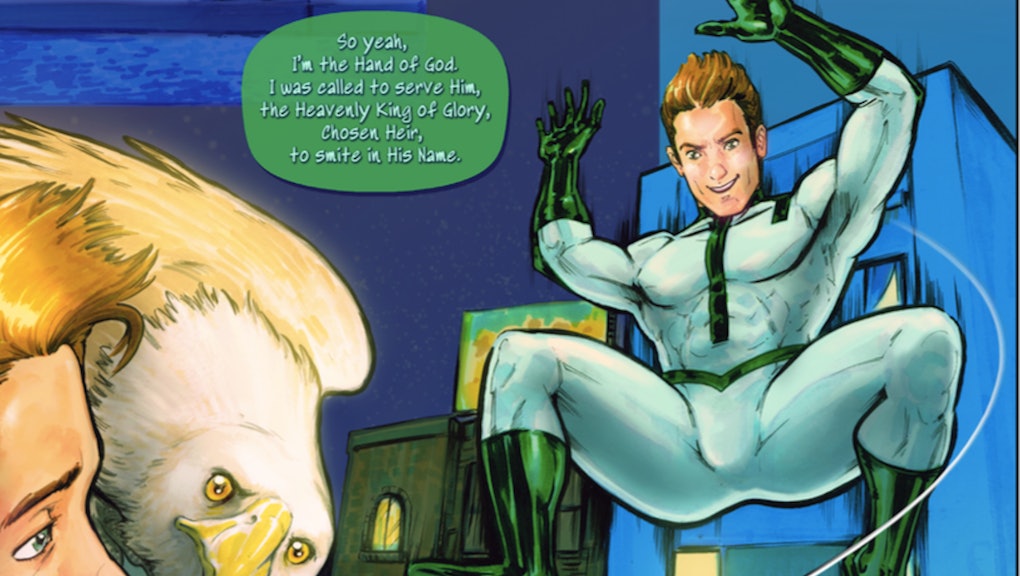 The Comic World Just Got Its First Gay Mormon Superhero

Mormons haven't gotten the best rap in recent years. Mitt Romney, the first serious Mormon candidate for president, went down to defeat, pilloried as a soulless plutocrat. The church's vocal opposition to same-sex marriage set its followers at odds with a growing trend of acceptance throughout the United States.

Now, however, one enterprising comic book artist is looking to flip the script on that narrative with a gay Mormon superhero. Stripling Warrior, named for the heroic figures of traditional Mormon theology, chronicles the adventures of Samuel Douglas Shepard, who is called upon by an angel to fight for justice.

The comic was created by Brian Andersen, a former Mormon — though he says he's yet to be excommunicated — who said he was inspired to create the hunky hero after his own experience with the church.

"It dawned on me that I should explore my own Mormon background in a comic book," Andersen, who says he doesn't follow any one faith but still believes in a god, told Mic. "Having recently gotten married to my longtime boyfriend, who is also Mormon, and having also recently welcomed our daughter into our lives, I knew the time was now to do something different and fun."

Though Andersen is now married and raising a child with his husband, getting to this point was tough. "None of my husband's family came to our wedding," he said. "They were as opposed to us getting married as they were to us having our daughter. This, in my view, was taught to them by our church, and I was tired of being deemed a 'sinner.'"

While Andersen was keen to show a gay romance between two Mormons as mainstream and not a "sin," the Stripling Warrior is himself on a hunt for sinful behavior wherever he found it. In the series' first issue, he battles two villains prominently seen smoking and drinking.

Unlike many superheroes, who often derive power from freak accidents, the Stripling Warrior follows a plot drawn heavily from Mormon theology, which can at times can be impenetrable to those not steeped in the faith. "La Lia is also my direct connection to the Holy Ghost," Shepard says at one point to his hapless nemesis'. "She reveals a person's sins to me. And it appears this dude with a 'tude is due for some Godly punishment."

Despite the jargon, Andersen said his desire was ultimately to create a big tent. "My goal is not to have Mormonism turn people off," he said. "It's just another element to the story, another layer that flavors the overall tale that I'm weaving," he said.

Getting the comic off the ground wasn't easy. After a fellow gay Mormon artist dropped out, Andersen enlisted the help of illustrator James Neish to put together the first few pages. A Kickstarter campaign launched in April 2015 proved successful and allowed for three issues of the comic to be produced.

"Thus far, out of all the comics I've created, Stripling Warrior has been the best selling, most widely received book," he said. "The response has been overwhelmingly positive. Most people have been really kind and supportive and even excited about the comic."

And yes, as a gay superhero, there's also plenty of this. Happy reading!