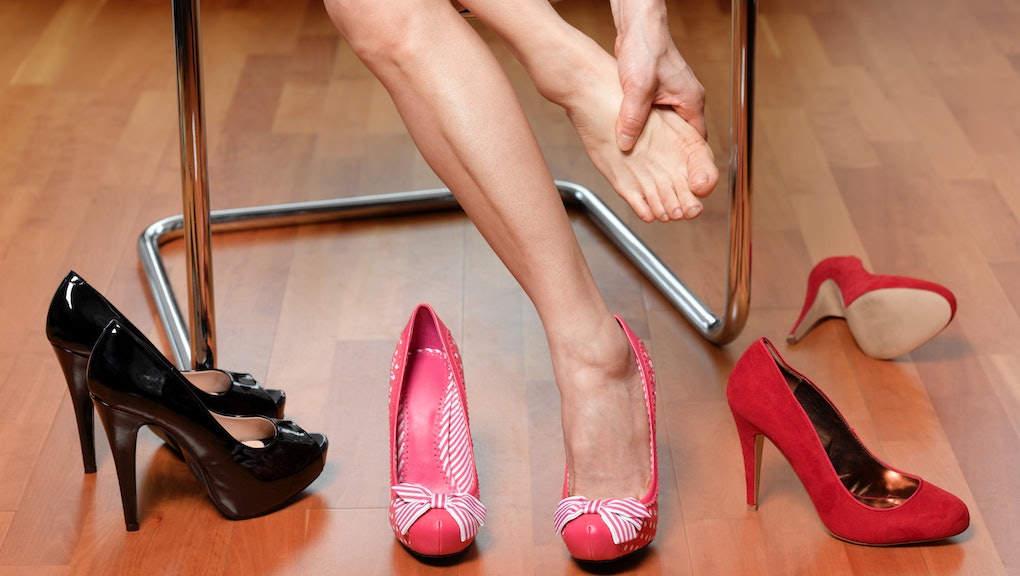 This Is What High Heels Are Really Doing to Your Feet

The fashion world has bad news for folks who love flat shoes.

From Yeezy sneakers to orthopedic flats, the fashion industry has actually favored flat, comfortable footwear in recent years. But the tides could be turning — or, rather, rising — according to Vogue.com chief critic Sarah Mower, who this week predicted high heels are poised to make a comeback.

"Sticking my neck out here, but this is my prediction," Mower wrote. "Come the womenswear shows next month, avant-garde heels are going to be out in force."

Not up for cramming your feet into 6-inch stilettos? There are plenty of reasons to stick with flats, particularly when it comes to your health. Dr. Irene Loi, a podiatrist in the department of orthopaedic surgery at NYU Langone Medical Center, reminded Mic why it's okay to say to say no to high heels — no matter how often they appear on the runway this season.

What happens to your foot, physiologically, when you slip it into a high heel?

"High heels, especially the very pointy ones, tend to squeeze your toes into a very narrow toe box," Loi told Mic via email. The big toe gets pushed outward, toward the rest of the toes, while the first metatarsal bone — the bone below and behind the big toe — is pushed inward.

"It forces one's foot into an abnormal shape," Loi wrote.

Most folks who've spent a night in heels will recognize the short-term health risks, including redness, blisters and calluses, "all of which can cause pain," Loi wrote.

The long-term effects are a little more troubling. According to Loi, wearing high heels can accelerate the development of bunions — bony bumps that form where the big toe meets the first metatarsal bone, and that produce pain, discomfort and a lot of difficulty when it comes to finding shoes that fit.

Because of the toe-cramming factor, high heels can also produce hammer toes — what happens when your toe joints become permanently bent. Your toes could also end up overlapping with each other.

The muscular damage is real.

Over time, high heels can weaken your ankle muscles and balance, according to a study published last year in the International Journal of Clinical Practice.

In that study, researchers in South Korea ran tests on 40 women studying to become airline attendants, according to the New York Times, aka women who would have to wear heels every day. The researchers divided the women by class year — freshman, sophomore, junior and senior — and tested their ankle strength and balancing abilities.

The women's ankle strength increased as they hit sophomore and junior years. But by the time the women reached senior year, their ankles weren't looking so good; they'd developed weakness in their plantar flexor, dorsiflexor, invertor and evertor muscles. "The prolonged wearing of high-heeled shoes revealed the imbalances of four functional ankle muscles," the researchers wrote.

"These results suggest that wearing high heels may strengthen ankle muscles at first (one to three years)," they wrote, "but prolonged use (about four years) of high heels eventually causes a muscular imbalance, which is a crucial predictor of ankle injury."

But here's how to make high heels work for you.

"If work requires them, they are hard to avoid," Loi told Mic, "but I do recommend putting on flats, or alternating with comfy sneakers while sitting at the desk. Take off your high heels and let our feet rest so they don't get 'suffocated' in a tight, narrow toe box."

And when it comes to shopping for shoes, Loi suggests "avoid the pointy toe boxes and choose more rounded, flatter toe boxes with some wedge on the heel for better support."

Enjoy your Uggs and L.L. Bean Boots while you still can. And try not to go too crazy on the heels with spring shopping season takes hold.