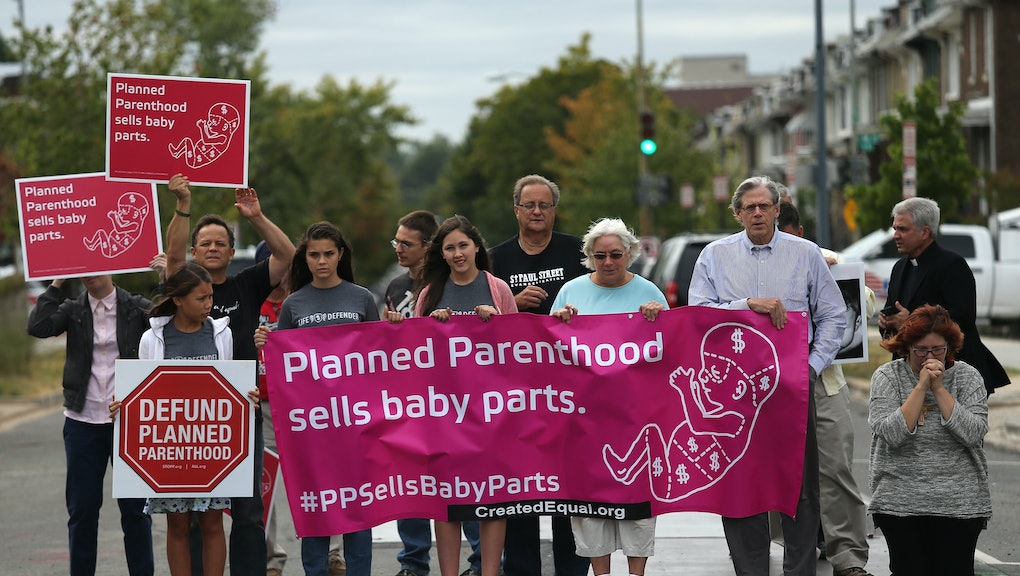 The pro-life filmmakers who took aim at Planned Parenthood with an undercover video ultimately shot themselves in the foot: On Monday, a Texas grand jury called to investigate claims against the women's health organization instead indicted David Daleiden and Sandra Merritt for the falsification of government documents, a felony that could earn them 20 years in prison.

But unfortunately, that reversal of fortunes can't undo the damage Daleiden and Merritt have already caused.

Since its 2015 release, the video in question has been exalted by the likes of Carly Fiorina as proof that Planned Parenthood is a murderous organization absent of ethics that must be shut down, because it appears to depict employees at a Houston clinic talking freely about the sale of fetal tissue for profit. The footage — captured when Daleiden and Merritt, posing as representatives from a company called Biomax, smuggled cameras inside the facility — was heavily edited. Over more than two months spent examining the video, the grand jury found its allegations baseless.

"As the dust settles and the truth comes out, it's become totally clear that the only people who engaged in wrongdoing are the criminals behind this fraud, and we're glad they're being held accountable," said Eric Ferrero, a spokesperson for the Planned Parenthood Federation of America, following the decision, according to the New York Times.

In recent months there has been a dramatic upswing in attacks on Planned Parenthood. In October the Southern Poverty Law Center reported that the organization had seen four incidences of arson in 74 days. That same month a vandal broke into a New Hampshire clinic and took a hatchet to computers, equipment — basically everything in sight.

And then there's Robert Dear, the gunman who killed three when he opened fire on a Colorado Springs Planned Parenthood in November. After his arrest, he reportedly referenced the organization, saying "no more baby parts." He later declared in court that he was "a warrior for babies," adding, "You'll never know what I saw in that clinic. Atrocities. The babies. That's what they want to seal," the Associated Press reported.

"Seal the truth, huh? Kill the babies. That's what Planned Parenthood does," he continued.

But the thing about Planned Parenthood is that it operates within the law: It provides legal abortions, along with such services as STI testing, sex education, birth control and basic medical procedures for women, free of cost. As Monday's grand jury decision confirmed, Planned Parenthood does not traffic in infants' limbs — but that hasn't stopped the staunchly pro-life Fiorina from claiming that it does.

In a Monday interview with Hugh Hewitt, the presidential candidate agreed that the charges against Daleiden and Merritt were valid, but stuck to her guns when it came to the video's contents. "From what I read," she told the radio host, "somehow the charge is that they falsified government identities because that's true obviously ... I only know what I read at this point, but I think it's pretty clear that we now know what goes on in Planned Parenthood clinics."

"Here's what I know," she continued. "Planned Parenthood has been trafficking in body parts."

There's no un-ringing that bell.