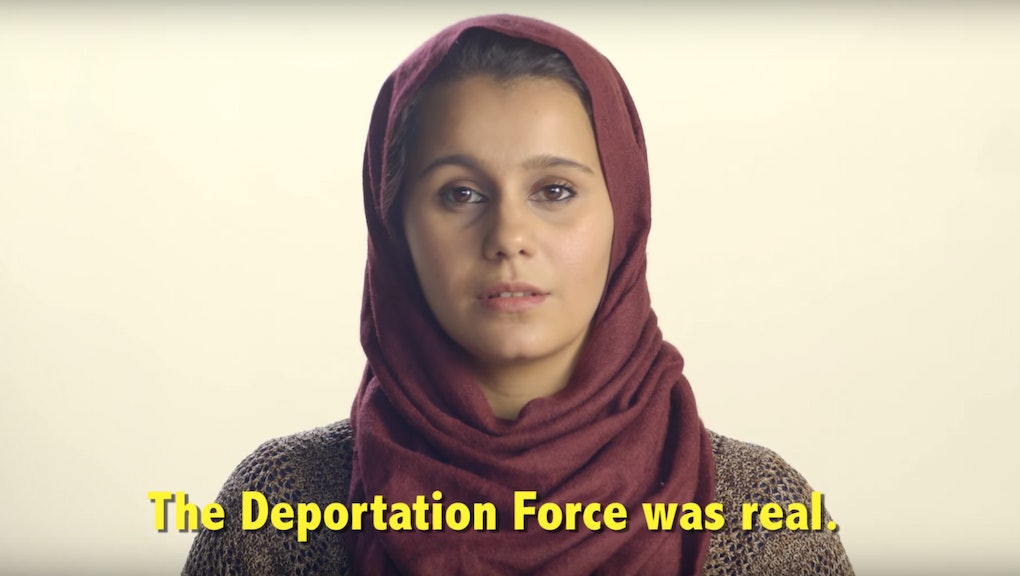 What would happen if you deported the over 11 million unauthorized U.S. immigrants?

A new video from director Paola Mendoza attempts to answer that question through a fictional dystopian account of undocumented citizen Hina Naveen. In the video, Naveen, a real-life graduate of a nursing program, is working in a hospital when the "deportation force" comes through and rips away her patient from his hospital bed.

The film is fiction, but very much rooted in reality. According to Mendoza, the film was inspired by the "toxic nature" of how we talk about immigrants in the country right now.

"People are worried about the future of where policy is going in this country," Mendoza told Mic.

While the video seems like 1984-level science fiction, it also reflects the reality of America's current political climate, and it opens with the words of none other than 2016 Republican presidential candidate Donald Trump.

"Trump is really fueling this racist rhetoric and that damage is palpable," Naveen, star of the video, told Mic. "He's fueling hate crimes. You see all this negative stuff happening because of Trump. I hope the majority of Americans would see that and say, 'We don't want this man to be our next president.'"

Naveen is a 25-year-old undocumented immigrant, Deferred Action for Childhood Arrivals recipient and nursing school graduate who came to the United States at 10 years old. Under DACA, Naveen can go to school, hold a job and contribute to the economy without fear of deportation. That is, unless the deportation force becomes a reality.

Mendoza came to the United States as 3-year-old. When I asked her whether the video's dystopian vibe was intentional, she said: "I think the political atmosphere in which we are living right now is ripe for just that. When I came up with the idea, it wasn't that far-fetched."

The 11.3 million immigrants that would be deported spell a $1.6 trillion loss for the United States' economy, the video reported. "Our pockets talk really, really loud, and it's important and powerful and strategic to show people that side of the argument," Mendoza said.

But the emotions at the heart of the video still get to Naveen. She said that during the shooting process, Mendoza told her to imagine being ripped apart from her sister to access her sadness.

"It scared me because that is a reality that could happen," she said.

Naveen hopes the video will help people understand that immigrants are all around them, even though Americans are often too scared to talk about it.

"The fact that we connect with people every single day and they don't know each other's stories, people would realize how impossible it is to kick people out just like that."