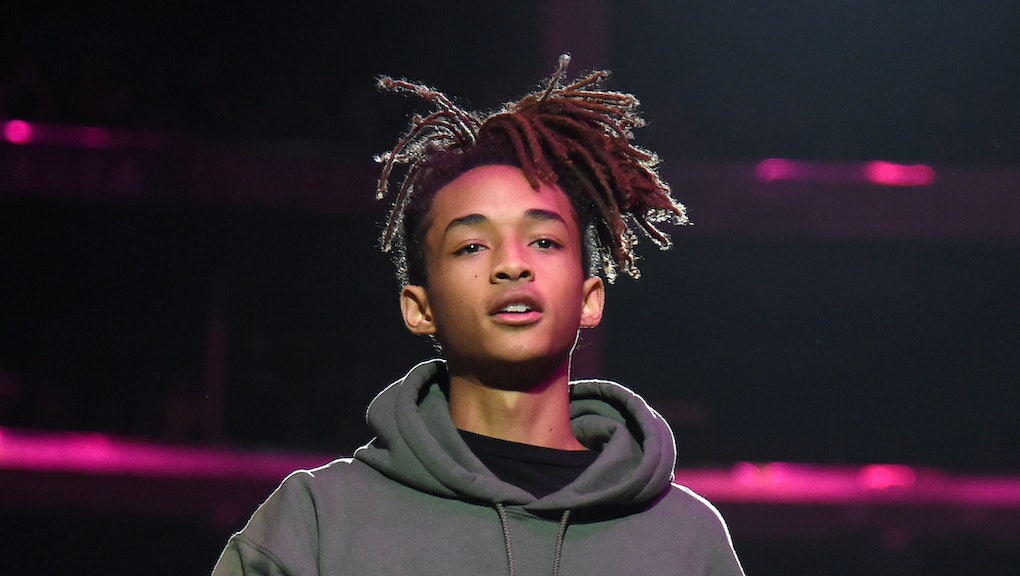 He's all grown up.

Jaden Smith, the musician, actor, fashion model and son of Jada Pinkett Smith and Will Smith, shared an image of himself on Instagram that has many seeing him in a new light.

Smith coupled the Instagram post with the caption, "Just come here." In the snap, a bright red flower is tucked behind his ear, his hair covers his left eye, his muscular arms are crossed and his left hand peeps out over his bicep. At the end of his fingers are blue-painted nails. He's also wearing a skirt.

The post, which is a shot from an upcoming photo shoot for Vogue Korea, has the internet ablaze.

This is not Smith's first time in a skirt. The 17-year-old became the new face of Louis Vuitton's Spring 2016 earlier in January. Louis Vuitton creative director Nicolas Ghesquière announced the collaboration on Instagram with two preview images of Smith alongside female models.

Just like the positive reactions that Smith received for his Louis Vuitton collaboration, Smith's new snap has gotten some very good reviews.

With this latest shoot, Smith continues his gender-defiant style streak. He rocked a dress when he accompanied Hunger Games star Amandla Stenberg to prom. He also wore a stellar flower crown to 2015's Coachella. The Huffington Post praised Smith for being a #carefreeblackboy in 2015, showing that Smith will not hesitate to take up the mantle of black men who redefine masculinity.

"[Willow and I] both don't really care," Smith told New York Times Magazine in November 2014. "I like to wear things that I make, but I throw it on as though I was throwing on anything. It looks cool, sometimes."

In fact, he also told GQ that he hopes others will breathe easier because of his example. "I just want to teach people how to be comfortable. Stop being so scared."