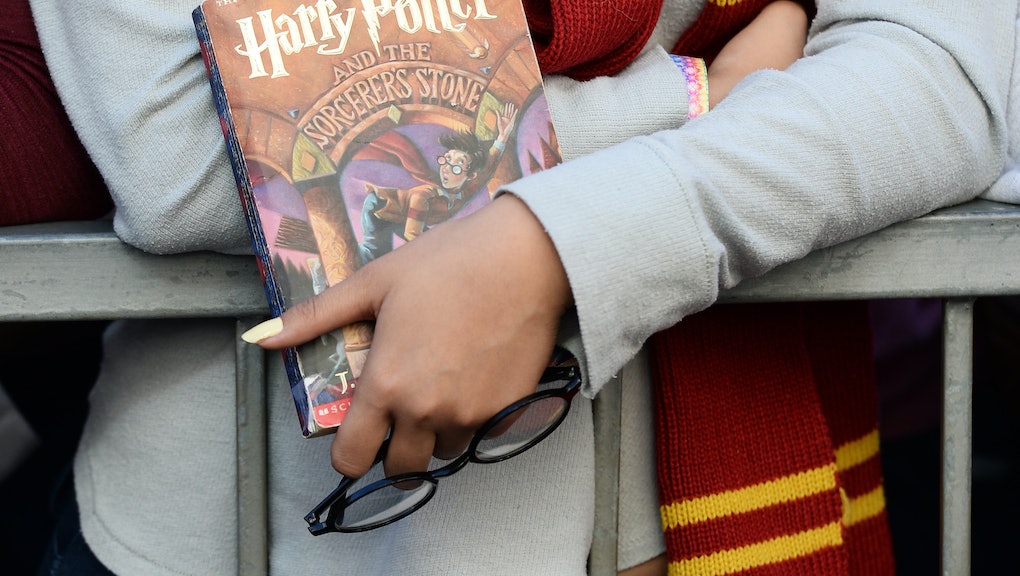 With the death of Alan Rickman, who played Professor Severus Snape in the Harry Potter films, author J.K. Rowling revealed one of the greatest secrets regarding a private conversation between herself and the late actor.

Although the last Harry Potter film premiered in 2011, fans have not stopped creating theories that revolve around the wizarding universe. These four fan-created theories may leave some scratching their heads, laughing at the thought or actually agreeing with their premise.

The Dursleys were a happy family — until Harry was introduced. A theory on the website Graphic Nerdity postulates that the reason Harry's aunt, uncle and cousin treated him so poorly throughout the series was a direct result of Harry himself.

Most fans know that Harry's parents were killed by the evil antagonist Voldemort, placing him in the care of his closest family, the Dursleys. The Dursleys mistreated Harry throughout the series, but an interview with author Rowling may have confirmed that Harry's mistreatment could have been a result of his status as a horcrux.

"For convenience, I had Dumbledore say to Harry, 'You were the Horcrux he never meant to make.' But I think, by definition, a Horcrux has to be made intentionally," the author said in an interview. For those not familiar with the wizarding world, Horcruxes are cursed objects that contain pieces of someone's soul.

Rowling said that although Voldemort admits that he never intended for Harry to become a Horcrux, Harry still, for all intents and purposes, is a Horcrux. If Harry shares the same properties as the evil soul pieces, then it's possible the evil that radiates from the cursed objects seeped into the Dursleys and turned them into the jerks readers are so familiar with.

In Harry Potter and the Deathly Hallows, Harry's best friend Ron Weasley wears a Horcrux that shows him visions, making him burst out in random fits of anger, evidencing the negative effects of being in close proximity to one. Ron Weasley was around the evil Horcrux for a short time, while Harry Potter lived with the Dursleys for years.

Draco Malfoy was the hero of Harry Potter and the Chamber of Secrets. Draco Malfoy, Harry's main rival during the series, may have been a good guy all along, according to a few Tumblr users and Reddit user NatureBoy92.

In Harry Potter and The Chamber of Secrets, Ron Weasley's little sister, Ginny Weasley, received a Horcrux in the form of a diary, which compelled her to reopen a secret area of Hogwarts that contained a murderous snake, known as the Chamber of Secrets.

Ginny Weasley received the diary from Draco Malfoy's evil father, Lucius Malfoy, who knew that opening the Chamber of Secrets would lead to the fall of Hogwarts. When the Chamber is opened, the brainiac best friend of Harry and Ron, Hermione Granger, provided a crucial detail that help Ron and Harry figure out how to defeat the snake.

While Hermione was petrified after seeing the snake's eyes through a mirror, she had a ripped-out page about the murderous snake species. However, the theory posits that Draco found out about the plan his father conspired and ripped out the page that would eventually save everyone in the end.

In the second movie of the series, Draco is seen ripping out a page from a book and putting the missing page in his pocket. Hermione, who loves books, wouldn't have ripped out a page of any book, so the theory posits that Draco planted the page somewhere Hermione was able to find it.

Albus Dumbledore is Ron Weasley from the future! An interesting theory implies that Ron Weasley and Hogwarts headmaster Albus Dumbledore are the same person. According to the "Ronbledore" theorists, an older Ron Weasley exists in an alternate reality where he had to travel through time and space to become Dumbledore in order to help Harry ultimately defeat the dark wizard, Voldemort.

"Ron, our loyal Knight, will become a time traveler. He will be sent back in time to some point in the 19th century to live out the rest of his days at Albus Dumbledore, our venerable King," one "Ronbledore" theorist wrote on an older Harry Potter fan forum. "The exact mechanics of his journey in time are unclear, though we do believe it is unavoidable, and that it will in fact be the very move that enables Harry's eventual defeat of Voldemort (the checkmate) and that it will also have something to do with the White Queen (Bellatrix). Though you may think us a couple of nutters for making such an outrageous claim, we do indeed have evidence. Lots and lots of evidence."

The theorists also point out the physical similarities between the two wizards: Specifically, that they are both tall and thin, share a left-leg injury and have naturally red hair. Even though Rowling disproved this theory in October, the "Ronbledore" theory remains extremely popular in some circles.

Hogwarts was all in Harry's head. A theory on Cracked posits that Harry's friends, classmates and the entire wizarding world may have just been the product of a young, abused child's imagination.

Harry, who was abused and mistreated by his family members, have may created the entire fantasy in his head as a coping mechanism. The London Family Court Clinic states that children and teenagers who have lived with abusive family members "fantasize about a happier life."

Throughout the series, Harry also ends up in the Hogwarts hospital wing several times, usually for a broken bone or other general accident. The theory says this is just another way Harry copes with abuse: He creates an elaborate story for his injury, when in reality, he is being abused by the Dursleys.