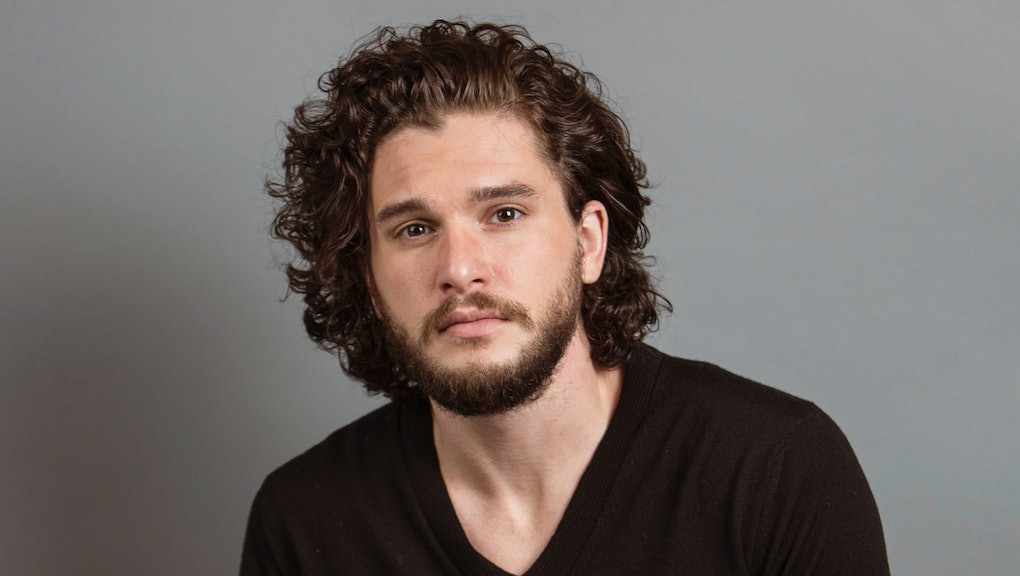 Here's a tip: If you ever want to earn a quick buck, challenge Kit Harington to a game of poker. You'll know if he's bluffing.

After months of speculation as to whether his Game of Thrones character, Jon Snow, was in fact killed at the end of season five, Harington revealed the first cracks in his armor in an interview Tuesday on the BBC Breakfast morning show.

Sitting down to chat with co-hosts Bill Turnbull and Louise Minchin, Harington talked about his upcoming part in the West End theatre play, Doctor Faustus, in the titular role. However, the interviewers couldn't help but bring up Game of Thrones, naturally leading to the prevailing question over Jon Snow's fate. While Harington kept to the script — emphasizing that Jon Snow is, in fact, dead — Turnbell asked about the reported images of Harington on set in Ireland. It seemed to catch the actor off-guard, as he took a brief, awkward pause before answering.

"I think anyone who wants to know what happens in season six has to wait until it comes out, all I can tell you is Jon Snow is dead," Harington said. "He died at the end of last season."

Of course, there's plenty of evidence suggesting the contrary. For starters, he's still sporting the same trademark hairdo in the interview, and the long locks are certainly primed to withstand the harsh winters around the Wall. For someone who wouldn't be returning to the show, it's odd he hasn't cut the hair he's previously said he hates. He has also appeared in the show's first poster for the new season, in addition to a teaser trailer (albeit in old footage).

Perhaps it was all the Jon Snow talk that confused Turnbell, but at the end of the interview he initially told Harington, "Thanks very much, Jon." He quickly corrected himself and apologized, to the amusement of Harington and Minchin.

Clearly, Turnbell is as ecstatic as fans for for winter to come back. Luckily for him, Game of Thrones will return for season six on HBO April 24. Watch the full BBC interview below.