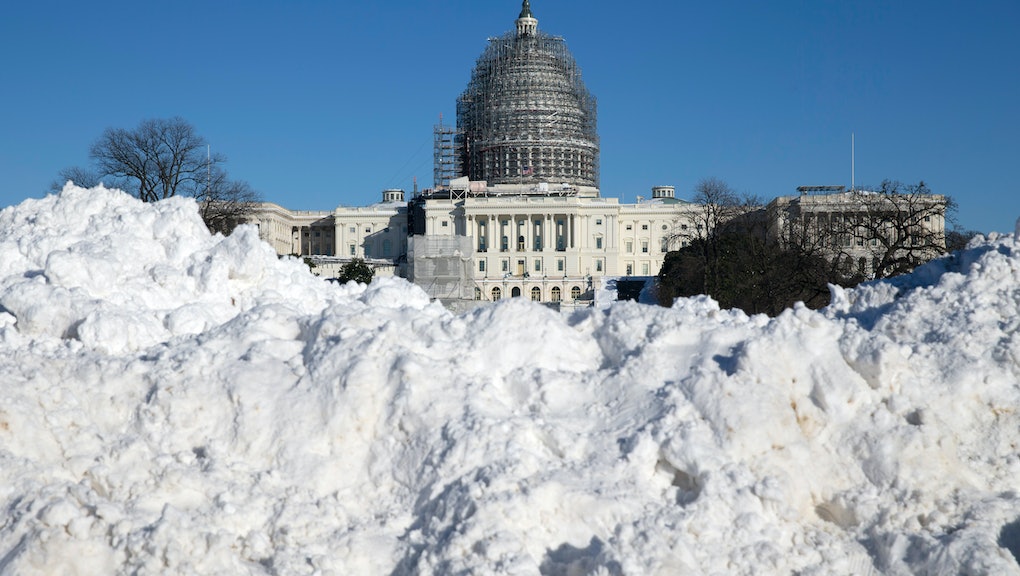 Women Made Up 100% of the U.S. Senate After the Blizzard — Because No One Else Showed Up

When Sen. Lisa Murkowski arrived to work on Tuesday after the weekend's snowfall, she might have thought she arrived in a future bereft of glass ceilings. As Murkowski took stock of the Senate floor, the Republican senator from Alaska noticed that every single person who showed up to work was a woman.

"As we convene this morning, you look around the chamber and the presiding officer is female," Murkowski said, addressing the floor. "All of our parliamentarians are female. Our floor managers are female. All of our pages are female."

It's only a matter of time before a men's rights activist pipes up with a, "Has feminism gone too far?" But this was no stunt.

"Now, this was not orchestrated in any way, shape or form," Murkowski noted. "We came in this morning and looked around and thought, 'Something is different this morning,' — different in a good way, I might add."

According to Roll Call, the congresswomen were assembled for a brief session ahead of Wednesday's discussion on Murkowski's proposed bipartisan bill, the "Energy Policy Modernization Act." She is slated to introduce the bill alongside Sen. Maria Cantwell (D-Wash.).

Though there are still just 20 women in the U.S. Senate and 84 voting members in the House of Representatives — accounting for about 20% of each — women legislators have united before to take the lead in Congress. During the 2013 government shutdown, female senators were the loudest voices urging their colleagues to compromise. At the time, Sen. Susan Collins (R-Maine), who presided over Tuesday's Senate meeting, joined forces with Murkowski and Sen. Kelly Ayotte (R-N.H.) to form a task force.

Women continue to make strides in the Senate, which can be measured by the amount of traffic in the Capitol's lady's room. Following the 2012 election, which elected a historic number of women to the Senate, women were greeted by epic gridlock in the two-stall restroom. Senators were still working on the plans for renovations to expand the bathroom in June. According to the Atlantic, the story is a favorite anecdote of Sen. Amy Klobuchar (D-Minn.), who said, "We're in a minority group and so we tend to stick together. You get power that way by sticking together across the aisle."

Murkowski would surely agree. She said it's in her gender's DNA.

"Perhaps it just speaks to the hardiness of women," she said, speaking of their trek through the snow to work. "Put on your boots and put your hat on and get out, slog through the mess that is out there."