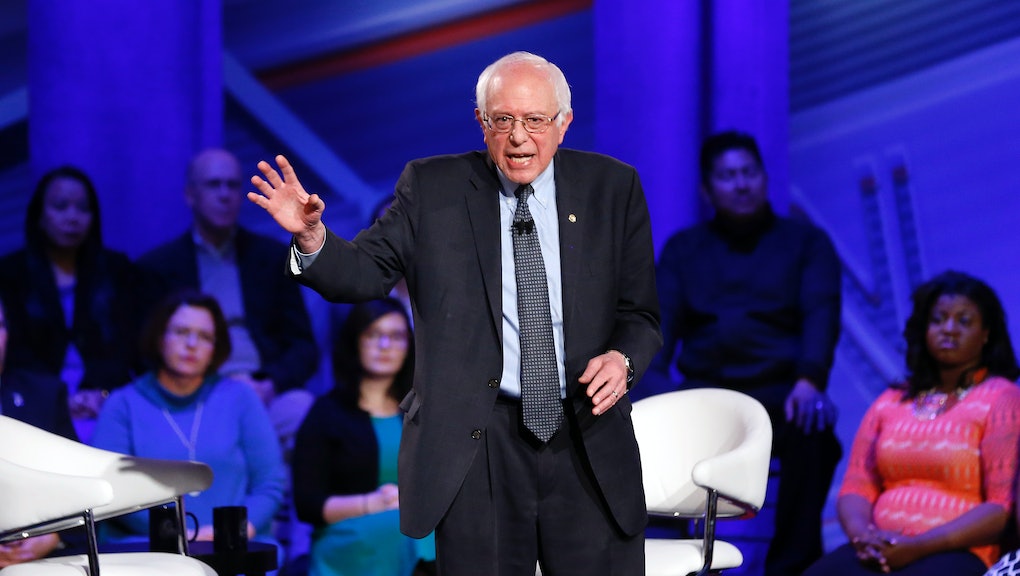 If the rise of Donald Trump and Ted Cruz reflects mounting anti-establishment fervor in the Republican Party, the success of Sen. Bernie Sanders (I-Vt.) in shaking up the Democratic race underscores that disillusionment with the powers that be isn't the monopoly of the GOP.

Sanders, the scourge of corporate America and wealth inequality, has surged in the polls and drawn record crowds with an unabashedly populist message. But even as the senator calls for a "political revolution," Sanders has shown in recent weeks that he's open to borrowing from the establishment's playbook as he looks to score an upset over frontrunner Hillary Clinton.

No, Sanders isn't suddenly hobnobbing with hedge-funders or embracing super PACs. But a candidate who rails against politics-as-usual — who prides himself on having never run a negative ad and who refused to make hay of Clinton's email controversy — is maneuvering more and more like a traditional politician, honing his positions in response to concerted attacks and placing a newfound emphasis on the optics of his campaign.

Playing defense: Though he's renowned by fans for his decades of consistency on issues from income inequality to LGBT rights, Sanders has lately adopted a tried-and-true tactic favored by national politicians of all stripes: the U-turn.

For months, Clinton has assailed Sanders for his 2005 vote in favor of legal immunity for gun manufacturers, among other pro-gun votes. While Sanders emphasized his support for measures like background checks and an assault weapons ban, he steered clear of expressing regret for his immunity vote, saying only that he'd be willing to "take another look" at the issue.

Take another look he has. On Jan. 16, after Clinton had ramped up her attacks on his gun record, Sanders announced his support for legislation introduced by Sen. Richard Blumenthal (D-Conn.) and Rep. Adam Schiff (D-Calif.) that would roll back the 2005 immunity law.

"As I have said for many months now, we need to look at the underlying law and tighten it up," Sanders said in his statement announcing support for the bill.

With an eye on constituents back in gun-loving Vermont, Sanders proposed an amendment to the Blumenthal-Schiff bill with the aim of ensuring the legislation wouldn't "negatively impact small gun stores in rural America."

Sanders' recalibration on guns didn't entirely defuse Clinton's attacks. This week, her campaign organized a conference call with reporters in response to a Sanders mailer touting him as a "lifelong advocate for gun safety." On the call, Brady Campaign to Prevent Gun Violence president Dan Gross said Americans were "less safe as a result" of Sanders' pro-gun votes, including those against the 1993 Brady Handgun Violence Prevention Act and for manufacturer immunity.

In yet another sign that he's more of a natural politician than he often lets on, Sanders opted to release the details of his single-payer health care plan two hours before the Jan. 17 Democratic debate — depriving Clinton of the chance to keep arguing that Sanders was being evasive on the specifics, while giving her campaign little time to examine the proposal before the candidates faced off.

An aggressive approach: But for Sanders, adapting to the rigors of a national campaign hasn't just meant playing defense. It's also entailed a more aggressive approach against Clinton, one that has mostly been focused on their issue differences but that reflects Sanders' willingness to play hardball.

Walking a fine line between a simple "contrast" ad and an outright negative one, Sanders this month released a television spot speaking of "two Democratic visions for regulating Wall Street."

"One says it's OK to take millions from big banks, and then tell them what to do," Sanders said in the ad, not mentioning Clinton by name but leaving little doubt whom he was referring to.

And as the Wall Street Journal observed, Sanders has also added a personal edge to his lines of attack — comparing Clinton's lengthy political resume to Dick Cheney's, making sure to call former President Bill Clinton's sexual history "totally, totally, totally disgraceful and unacceptable" before saying it shouldn't be a campaign issue and saying Clinton's defense of her Wall Street speaking fees doesn't pass "the laugh test."

A focus on optics: Then there's Sanders' adoption of key campaign PR techniques. To be sure, the rumpled socialist has done little to alter the fact that he's hardly out of central casting for a presidential contender, but he's also shown a growing appreciation for the importance of optics in a national campaign.

Following a series of polls that show him either close to or leading Clinton in Iowa, Sanders is doing what any typical politician in a fiercely contested battle would do: playing the expectations game.

At a Tuesday rally, Sanders ticked off the reasons Clinton, not he, should have the upper hand heading into the Feb. 1 caucuses. "She was here in 2008, has experience that we did not have. She's done this once before. We didn't. She has a very strong organization," BuzzFeed quoted Sanders as saying. Sure, his campaign had "gained a whole lot of ground," but Sanders said his campaign wasn't quite the unique force of Barack Obama's 2008 effort.

"I hope we do" match Obama's performance, Sanders said. "But frankly I don't think we will. What happened in 2008 was extraordinary."

Sanders' message to supporters, and just as importantly, the media? A loss in Iowa wouldn't be fatal, while a win would mark a historic upset.

Sanders' informal Oval Office meeting with Obama on Wednesday comes at a pivotal moment. Though neither the White House nor Sanders will say the story had anything to do with it, it wasn't lost on observers that the meeting was slated to take place just two days after Politico published an interview in which Obama offered effusive praise for Clinton while delivering some tough words for Sanders, suggesting the senator is too singularly focused on income inequality.

If Sanders were as much an anti-establishment gadfly as some caricatures suggest, he might have welcomed Obama's critique of his populist campaign, seizing on it as evidence that he's rattled the establishment. But there's no winning a Democratic primary by bashing a president who remains overwhelmingly popular among Democratic voters. Sanders won't be seeking an Obama endorsement Wednesday — none will be forthcoming until after the primaries are settled — but the meeting points to a desire to smooth over differences with the Democratic Party's effective head.

So Sanders' "political revolution" may yet arrive. But if it does, he'll have achieved it, in part, through decidedly unrevolutionary means.