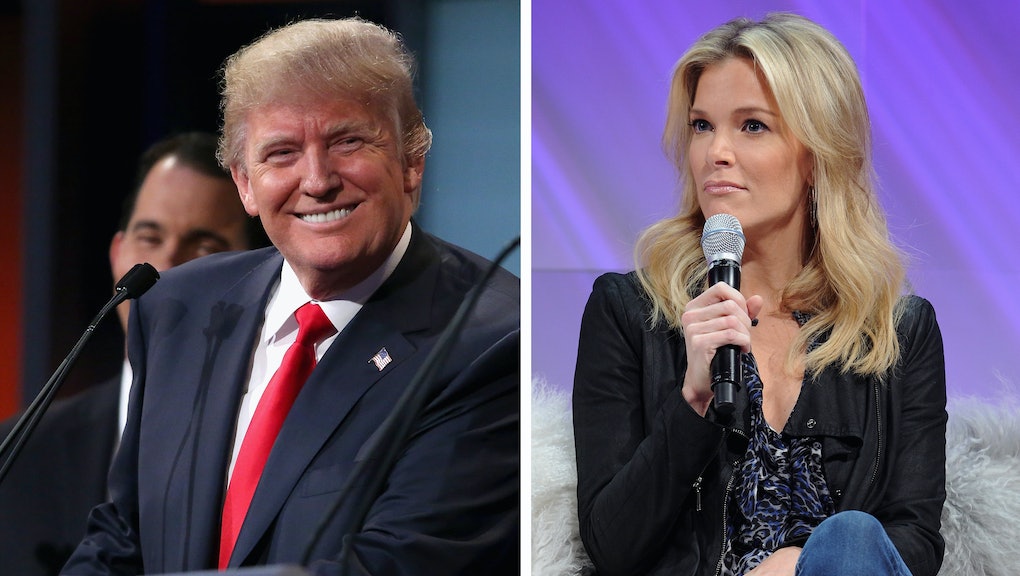 There he goes again.

Trump announced with fanfare late Tuesday that he was pulling out of a Fox News-sponsored debate set for Jan. 28 in Iowa, the last televised faceoff before Republicans caucus to choose a nominee — essentially taking his ball and going home.

"Unlike the very stupid, highly incompetent people running our country into the ground, Mr. Trump knows when to walk away," the campaign said in a statement. "Roger Ailes and Fox News think they can toy with him, but Mr. Trump doesn't play games."

Trump, who's already been through six debates this cycle, "will instead host an event in Iowa to raise money for the Veterans and Wounded Warriors, who have been treated so horribly by our all talk, no action politicians," the campaign said. "Like running for office as an extremely successful person, this takes guts and it is the kind of mentality our country needs in order to Make America Great Again."

On Wednesday morning, Trump continued his fusillade against the network:

The response: Fox's response to Trump's blowoff pointed to a distinctly unkind side of the back-and-forth over the Iowa debate.

"It should be clear to the American public by now that this is rooted in one thing — Megyn Kelly, whom he has viciously attacked since August and has now spent four days demanding be removed from the debate stage," the network said in a statement following Trump's announcement that he would not participate.

Trump's broadsides against Kelly go back to the Fox-hosted debate in Cleveland in August. Then, Kelly, as moderator, directly confronted the frontrunner on his track record of anti-woman comments, including denigrating females as "animals."

On Wednesday, the network specifically called out Trump's campaign manager, Corey Lewandowski, for making disturbing statements about Kelly's future if she appeared on the debate stage.

"In a call on Saturday with a Fox News executive, Lewandowski stated that Megyn had a 'rough couple of days after that last debate' and he 'would hate to have her go through that again," Fox said in its statement. "Lewandowski was warned not to level any more threats, but he continued to do so. We can't give in to terrorizations toward any of our employees."

"Trump is still welcome at Thursday night's debate and will be treated fairly, just as he has been during his 132 appearances on Fox News and Fox Business, but he can't dictate the moderators or the questions," the network said.

How will it play in Dubuque? It remains to be seen how Iowans feel about Trump skipping the debate.

Trump, a fan of online polls, conducted one of his own on Twitter earlier Tuesday before saying he'd skip the debate. The results as of Wednesday morning didn't suggest everyone who voted agrees with his decision to bag the debate: 57% of those who clicked said yes, he should debate, versus 43% who said he should skip it.

Some of Trump's rivals jumped on him, saying he wasn't exactly demonstrating presidential fortitude by taking his football and going home.

His closest rival, Ted Cruz, who's giving him a run for his money in Iowa, publicly challenged Trump to a one-on-one debate:

Other contenders, including Jeb Bush, went with the campaign equivalent of calling Trump a scaredy-cat:

Conservative pundit Erick Erickson, who disinvited Trump from his August RedState gathering after Trump's post-Cleveland debate mockery of Kelly as having had blood coming out of her "wherever" during the questioning, gleefully piled on:

Risk and reward: There's no question that Trump — who could still show up at the Iowa Events Center on Thursday for the debate —  will be scorned for playing "games" with the media or somehow denying the public a chance to see him engage in rhetorical sparring with the rest of the field.

As a political calculation, however, this kind of brinksmanship is pure Trump — and as all those polls that have him way out in front demonstrate, people are buying what he's selling. That means Trump could easily benefit among a segment of the electorate by not showing up on Thursday.

By skipping the debate, he gets to demonize the media and position himself as an independent decision-maker who won't bend to others' rules. By holding a veterans' benefit, he in one move both gives the perception that he'd rather be a doer than a talker and plays to a potentially vote-rich demographic.

"I think that's right on the money," Costas Panagopoulos, professor of political science at Fordham University, told Mic. "He's certainly masterful [at] coming up with controversial decisions and statements that basically establish him as someone who's not going to be put in a box. He's not going to be a typical candidate, he's not going to make decisions based on what somebody else thinks he should be doing."

"It's all part of the general perception he's trying to create of Donald Trump as his own man, beholden to no one," Panagopoulos said. "And that is something I think is resonating."

Larry Sabato, director of the Center for Politics at the University of Virginia, said Trump's move could play well with Iowa caucusgoers.

"This diminishes the importance of the last pre-Iowa debate, removes Trump as the on-stage target for six opponents (all of whom would be shooting real bullets at the frontrunner), makes Trump the lead on every news show for days — again — and provides an alternative event for his followers to watch and other networks to cover in order to poach audience from Fox," Sabato told Mic. "It could be a master stroke unless Iowans feel dissed or think the move signals instability that doesn't fit with the Oval Office."

Mission accomplished? Panagopoulos told Mic he wouldn't be surprised if Trump doesn't leave that podium empty in the end.

The real-estate kingpin has already secured "all of this media attention for refusing to do so, which would only get him even more media attention. So it's quite clever if you've got the guts to do it," he said.

"He's making some gutsy moves in this campaign — and I think the public is rewarding him for it."