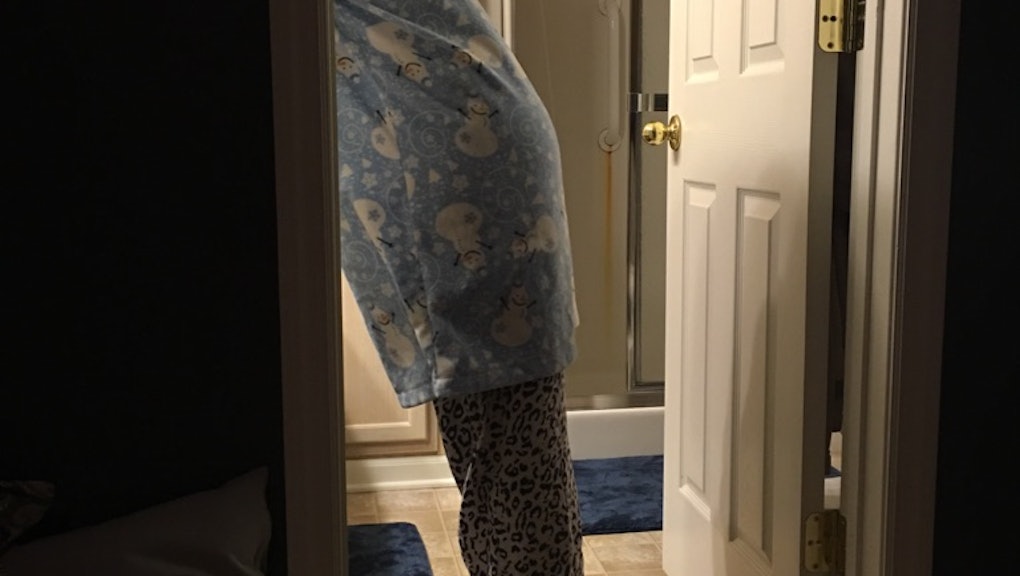 This Woman Has a "Don't Touch Me I'm on My Period" Outfit, and It Is Delightful

What's the best outfit to wear whilst lounging around the house and surfing the crimson wave? Probably something that's comfortable, durable and feels nice against the skin. And maybe something that says "I am profoundly uninterested in having sex, so don't even or I will chop your member off k thnx bai."

Talk about a flow-friendly ensemble!

The above photo was shared by Reddit user chrisflynn85 Tuesday with the title "This is my wife's 'don't fucking touch me I'm on my period outfit.'" (Mic has reached out to the poster of the photo and will update if we hear back.) It quickly rose to the site's front page, garnering more than 1,600 comments from users who either made mention of how the couple's shower handle seems to be menstruating itself (lol) or shared their own "period outfits."

Another wrote that she enjoys donning similar garb during her monthly uterus fiesta because "I'm grouchy as hell and want to crawl out of my own skin (PMS includes sensory processing issues for me). Someone touching me, even for nonsexual purposes, makes me want to throat-punch them."

The men on Reddit all seemed to agree that seeing their partners in a comfortable lounging ensemble is often a harbinger of premenstrual syndrome.

"They all have [a 'don't fucking touch me I'm on my period outfit']," said one guy. "They all use it against us. They all bleed." (This is actually a false statement, as approximately 2% to 5% of North American women don't menstruate at all, but point taken, sir.) Another dude praised the concept of a period outfit, writing that "clear signals are good for us men — we don't read minds!"

"My wife seems to want to be touched more when she's on her period," he wrote. "And she's hornier than ever. She says sex helps ease her cramping pain. She's more sensitive and passionate during period sex, and her boobs and butt get bigger during her period for some reason. I love it!"

So perhaps for some women, a period outfit is less "snowman robe" and more "slinky crotchless number from Fredericks of Hollywood." Well, then. To each their own.