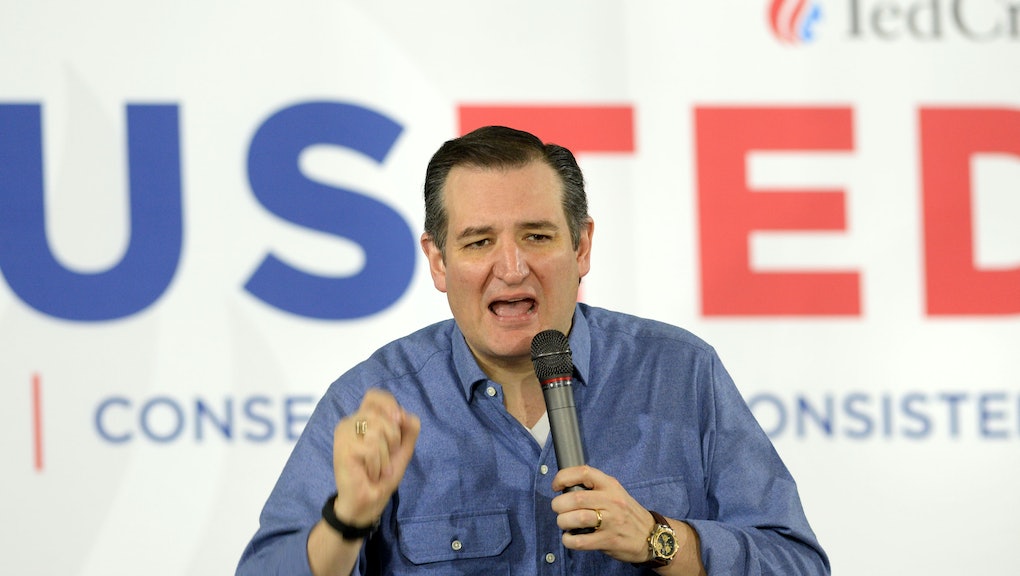 If real estate mogul Donald Trump goes through with skipping Thursday's Republican debate, Texas Sen. Ted Cruz will likely benefit as the event's headliner. Cruz has continued to sit behind Trump in the national polls, and a strong showing could help bridge the gap. Amid the presidential buzz, however, it's easy to forget that Cruz — like some presidential candidates with both parties — is still a senator, first and foremost. Based on his Senate voting record, and overall impressions on Capitol Hill, his colleagues and pundits consider his tenure a mixed bag.

Since Cruz began his term as senator in 2013, his lack of appearances have been in question. He has attended 17 of 50 public Armed Services Committee hearings, the second-worst record among senators in the group, and also missed 21 of 135 roll call votes in the first three months of 2015, which was the third-worst record in the span, according to Politico. In defense of his poor record, Cruz has attributed it to his presidential campaign, which has taken precedent.

"When you're putting together a campaign for president, like I've been, that entails a lot of time," Cruz said, according to the Huffington Post. "It's not like I've been at the beach sipping a piña colada."

Similarly, Florida Sen. Marco Rubio has been criticized for his Senate record, as he missed the second-most roll call votes during that time frame, Politico reported. As a result, the two senators have pointed to one another's poor attendance records as an indicator they might be the best fit for commander in chief, with Rubio saying Cruz has repeatedly voted against the Defense Authorization Act — a bill that's almost universally supported by GOP senators.

In fact, according to the Hill, Cruz has only had one bill passed by the House and the Senate, and signed into law by President Barack Obama, which was a legislation meant to prevent foreign U.N. representatives from entering America if there are any suspicions that they are terrorists or spies.

It's not just Cruz's lack of appearances that have irked his colleagues — many senators do not like his approach and polarizing persona on Capitol Hill. According to the Atlantic, this was exemplified in his retaliation of a bill from Utah Sen. Mike Lee, which would have given more flexibility in prison sentencing and prison rehabilitation programs.

"I for one, at a time when police officers across this country are under assault right now, being vilified right now, when we're seeing violent crime spiking in our cities across the country, I think it would be a serious mistake for the Senate to pass legislation providing for 7,082 criminals to be released early," Cruz said, according to the Atlantic.

It wasn't just the blatant and unexpected attack, but rather, that Lee might be his closest friend in the Senate. "Going into that hearing, we definitely thought it was in the realm of possibility he would come out against it, just not with that kind of colorful language," Conn Carroll, Lee's communication's director, said, according to the Atlantic.

Broadly, what Cruz's conservative colleagues have been bothered by what appears to be his willingness to throw the party under the bus for the purpose of improving his own stock with Republican voters. That has been evident in his low endorsement numbers in the presidential race, and his closest Senate ally, Lee, hasn't endorsed him yet.

"He knows his tactics are bound to fail, but pursues them to debase his Republican colleagues under false pretenses and endear himself to the base as the only authentic conservative," a GOP policy expert, who spoke on condition of anonymity, said in an interview with the Atlantic. "He is incapable of delivering anything but theater."