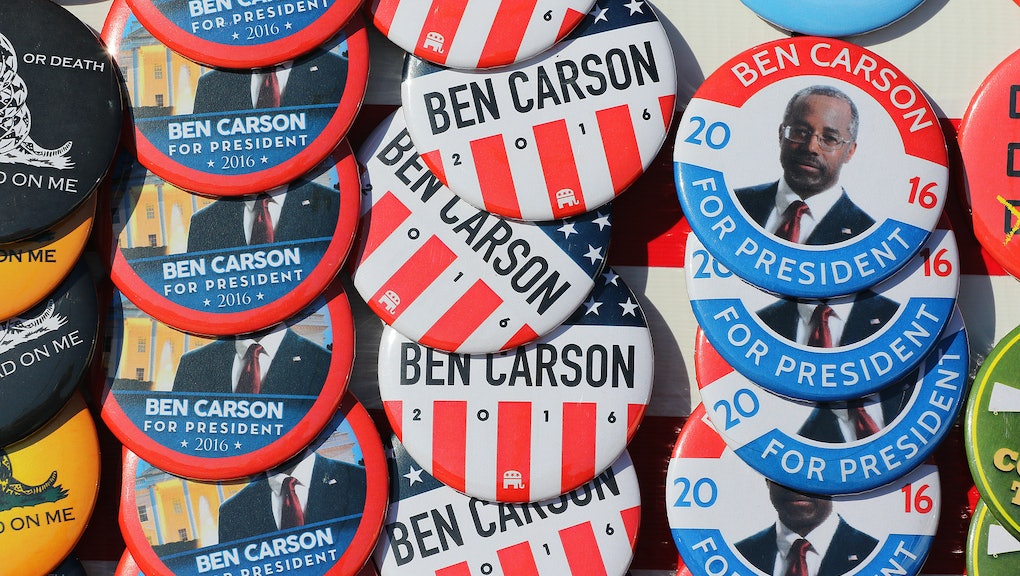 Retired neurosurgeon Ben Carson's jump into the political spectrum has had its ups and downs. In the latter part of 2015, Carson was surging in the national polls, but has since faltered as the presidential election cycle heads into its first major event of the year — the Feb. 1 Iowa caucuses. Unsurprisingly, as part of his campaign process, Carson has created a slogan, logo and website to rally conservative voters to his cause.

Since he announced his candidacy back in May, Carson has used the same slogan throughout his campaign: "Heal. Inspire. Revive." However, when compared to seven other presidential campaign slogans, the Washington Post ranked it as the second-worst among the group.

"Single words can be an effective as campaign slogans, but in this case, three feels like overkill," the Post's Hunter Schwarz wrote. "It doesn't even necessarily feel political. It sounds like it could be for a spa or a multilevel marketing company that sells energy drinks."

Similarly, Carson's first campaign logo was criticized heavily by graphic designers, artists and social media. "I am almost speechless on this one," Sagi Haviv, a design expert and instructor at the School of Visual Arts in New York, said in a presidential campaign logo review for Bloomberg. "First of all, the 'A' of America instead of the 'C' of Carson, or something in his name, again something that could be used for any of the candidates because they all represent America. But what they did to this letter is criminal."

Naturally, social media was equally blunt in its assessment.

Carson's team seemed to have listened, and created a new logo month later, which had a much-improved critical reception. "Big, big improvement on the previous identity," Haviv said, according to Bloomberg. "This new bold, purely typographic mark with a nice modern sans serif font comes across as strong and sophisticated."

The updated logo and slogan are prevalent throughout Carson's campaign website, which also features extensive information on his background, policy issues, events and news. Overall, his message is clear: Carson hopes to fight for right-wing deals, while also using his medical background as a means to repeal and remove President Barack Obama's health care law, "Obamacare," if elected.

And, if you want to join Carson in his endeavor, he's easily accessible in the digital space.