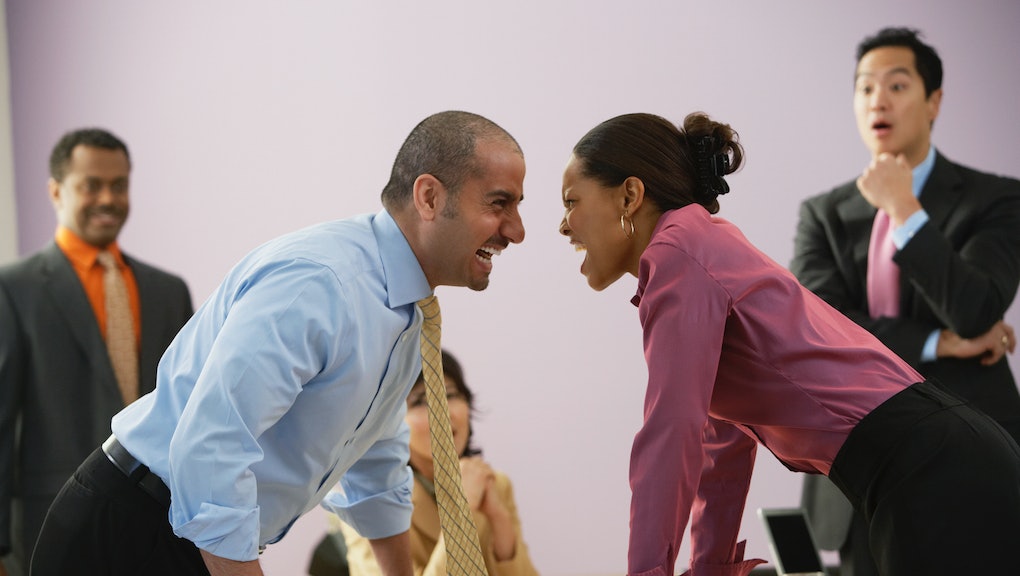 This Study Just May Be the Best Argument for Anarchy Yet

Perhaps your boss is an idiot, and maybe you've always known it. Or maybe he or she is a fair, enlightened despot. In any case, science says that if they're the top dog in work or life, they probably don't play well with others.

According to a recent study published in the Institute for Research on Labor and Employment, the everyday leaders who walk among us may be good at barking orders at subordinates, but suffer major deficiencies when working with other leaders as peers.

"Leaders or individuals who have lots of power tend to be effective individually leading teams," Angus Hildreth, a co-author of the study and a doctoral student at the University of California Berkeley told Mic. "So paradoxically — or worryingly — when you put a bunch of leaders into teams to work together, things fall apart and they struggle to make decisions and work effectively together."

To measure the very qualitative data, control groups were created to address collaborative tasks. In one case executives from a healthcare company on a retreat were divided into several groups reflecting their varying degrees of authority within the company. When the executives were given a fictional task to complete, senior leadership proved the least adept.

"They struggle to focus on the actual task itself, they just want their voice to be heard," Hildreth said. "They also share less information with each other."

It wasn't all bad news for your boss, however. In tasks that required less collaboration, leaders proved more nimble, generating more creative ideas and staying on tough tasks for longer. According to Hildreth, the genesis for the study came from his own work in the private sector at financial consulting firm PricewaterhouseCoopers.

"I worked with the CEO and the global leadership teams," he said. "Sitting in those meetings I observed leaders often struggle when they come together."

So is this a story of the triumph of the n00bs? The little guy over the man? Or is workplace anarchy destined to reign? And how does this revelation bode for the effectiveness of, oh, you know our government?