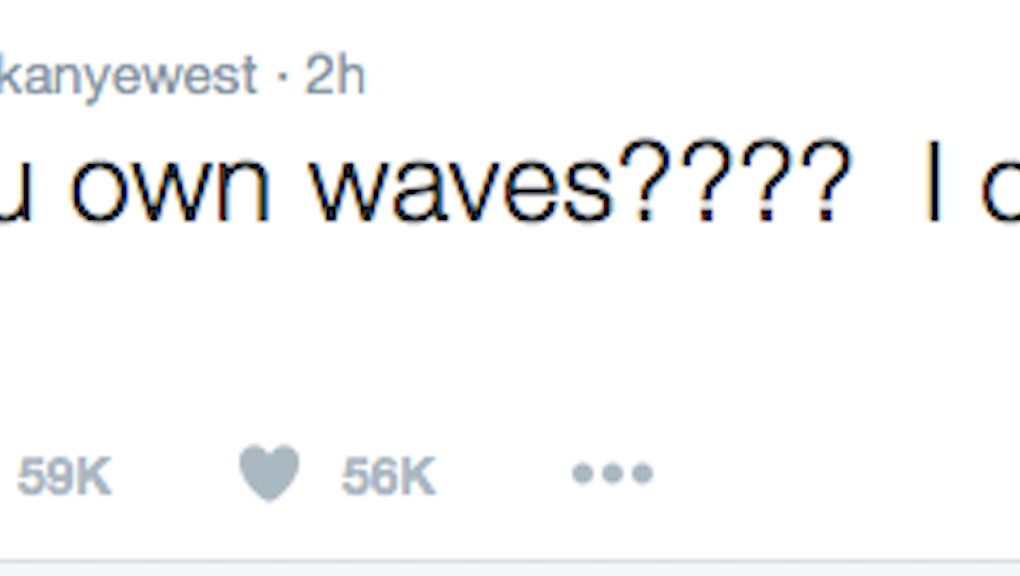 A Brief History of Kanye West's Most Epic Twitter Meltdowns

The latest Kanye West Twitter feud has waged. On Tuesday, West announced the the new name and release date for his highly anticipated upcoming album Waves — once called Swish — over Twitter. Fellow rapper Wiz Khalifa was quick to accuse West of stealing it from imprisoned rapper Max B. "Please don't take the wave," Wiz Khalifa tweeted. He later added, "Max B is the wavy one. He created the wave. There is no wave without him."

At first, West responded by saying, "All respect to Andre Harrel and Max B #Waves," but was met with skepticism by Khalifa. Then things really heated up as West tweeted out nearly 20 numbered tweets aimed at burning Wiz Khalifa, including trying to call his phone and saying that the "See You Again" artist wouldn't even have a child if it weren't for West.

The two rappers digitally battled it out from Tuesday night into Wednesday afternoon, and not without a few harsh jabs at Amber Rose and Kim Kardashian.

The rest of Twitter exploded with reactions to West and Khalifa's battle, but let's not forget that this is just the most recent of many West's epic Twitter rants. From khaki pants to talk show host Jimmy Kimmel, here are some of the most notorious meltdowns in recent West memory:

In 2012, West got deep and pondered the word "bitch," a word that frequently appears in hip-hop, in a series of now-deleted tweets, according to Complex. He tweeted, "I usually never tweet questions but I struggle with this so here goes....Is the word BITCH acceptable?" Then he goes on to wonder if it can be used in an "endearing" way, and if it's considered positive if used like "bad bitch."

He continued by saying that the hip-hop industry has "conditioned us to accept" the word. But this wasn't a lecture, West clarified, "I'm not tweeting to say what we need and what we don't... I just wanted to think out loud with you guys today..." He closed out the philosophical session by tweeting out a link to rapper Lupe Fiasco's song "Bad Bitch."

He finished by saying, "If a gam is made for a two year old, just allow them to have fun and give the parents a break for Christ sake." Ironically, his wife Kim Kardashian's app Kim Kardashian: Hollywood, earned millions from its in-app purchases, People reported.

In September 2013, Jimmy Kimmel mocked an interview West did with BBC Radio 1's Zane Lowe. "Does Kanye West know he's not supposed to be his own hype man?" Kimmel said on air, according to the Hollywood Reporter.

Unhappy with this portrayal, West went online to express his feelings, saying that Kimmel was out of line for spoofing the "first piece of honest media in years" in a now-deleted tweet, according to the Hollywood Reporter. West continued his rant, saying that Kimmel's face looks "crazy" and saying that comedian Sarah Silverman is funnier than him. Kimmel took it in grace by agreeing. In October, West then appeared on Jimmy Kimmel Live! and made peace — West without an apology.

In May 2012, West posted a series of tweets (now deleted) when he was just driving around and saw a few disliked fashion combos over a span of just five blocks, Glamour reported. Then the fashion designer listed out everything he hated, which included "button up shirts with hoodies," "khaki cargo shorts" and "sport coats with button up shirts, jeans and dress shoes." He ended by tweeting, "Detest."

In January 2012, West possibly broke a record when he tweeted out over 80 consecutive tweets in less than four hours, according to MTV. In the tweet-crazy spree that has been since deleted, he touched down on literally every topic, from his fashion company named after his mother Donda West to a position he turned down with Versace and the school system, according to Buzzfeed. "She said I would always point to the most expensive furs even as a childLOL," West tweeted, reflecting on his fashion sense. "Being a celebrity has afforded me many opportunities but has also boxed me in creatively," West later tweeted.

In 2011, West tweeted that although Britney Spears' single "Hold It Against Me" broke radio records, his and Jay-Z's song "H.A.M." was actually "one of the best songs of all time," according to MTV. Britney's manager Adam Leber replied by saying, "Thanks for 'letting' us be #1. Much appreciated..." West was quick to clarify that he meant "no hate," and that he was "truly happy" for Spears.

The media covered the Twitter exchange by comparing it to the 2009 Taylor Swift-West incident at the Video Music Awards, in which West declared Swift unfit for the award. Angered by the media, West went on a Twitter rant, saying that the media is full of lies and that no one can make a joke in 2011 anymore.