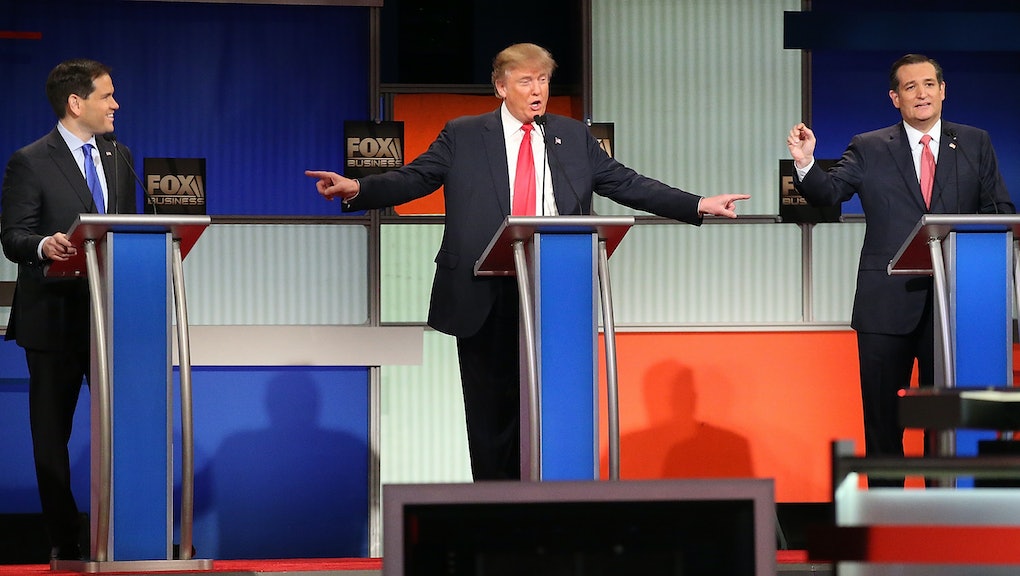 The Republicans, absent their dominant frontrunner, will converge on Des Moines, Iowa, on Thursday evening for their seventh presidential debate — the final face-off before Iowa launches the presidential nominating process Monday.

While it remains to be seen how Donald Trump's decision to skip the debate — the latest chapter in a long-running feud between the businessman and Fox News co-moderator Megyn Kelly — will affect the state of play, this much is clear: The six debates under Republicans' belts have proven pivotal in shaping the contours of the GOP race, with record viewership offering voters a vivid look at the party's bitter internal divide and helping winnow a field that once numbered an unwieldy 17.

From the first debate, hosted by Fox News in August, the Republican showdowns have sparked unprecedented interest; that debate attracted a record-breaking 24 million viewers, and all 2015 GOP debates averaged 18 million viewers. CNN noted that the most-viewed Republican debate of the 2012 cycle only drew 7.6 million viewers.

A gigantic factor: "What's happened is more people have seen the candidates than probably ever before in history," veteran GOP operative Ed Rollins told Mic. "Someone like Trump, who's really dominated one, by his personality, and two, by being center stage at every debate, has been helped immensely."

Trump's controversial statements and policy proposals have consumed much of the oxygen at previous debates. Perhaps the most notable example was the CNN-hosted debate in September at the Ronald Reagan Presidential Library, where moderator Jake Tapper eagerly stoked conflict between Trump and rival candidates, asking the others to answer for Trump's critiques on everything from their governing records (Gov. Scott Walker of Wisconsin) to personal appearance (Carly Fiorina).

But while Trump's position atop the polls and the sheer force of his brash personality have placed him front and center, the commentariat's stubborn belief that there was no way Trump could actually be the nominee — now largely buried amid his continued dominance just days before the first votes are cast — led observers to focus on other subplots within the debates: Jeb Bush's abortive attempt to nail Marco Rubio on his Senate absences, a crucial moment in Rubio's bid to become the GOP establishment's candidate of choice; Ted Cruz's crowd-pleasing broadside against the mainstream media, which helped vault him past the middle of the pack; and Cruz and Rubio's heated clash over immigration reform.

Trump is "the definition of the 'all publicity is good publicity' candidate," Republican strategist Kristen Soltis Anderson told Mic. When Trump isn't the main story, she said, he's suffered.

Anderson noted Trump saw the steepest declines in his national polling average in late September and early November, in both cases after debates in which other candidates became big stories.

Though questions about Trump dominated the September CNN debate, Fiorina emerged as the night's big winner, with her deft response to Trump's comments criticizing her face ("I think women all over this country heard very clearly what Mr. Trump said") and her impassioned denunciation of Planned Parenthood (subsequently found to have rested on faulty factual ground).

And the CNBC debate in October — in which Cruz lambasted the media for its focus on personality conflicts, while Rubio and Bush duked it out — preceded the brief period in which Trump surrendered his national lead to Ben Carson.

Trump has since regained his lead, and now sits near his highest point yet in the RealClearPolitics national polling average. But it's telling, Rollins told Mic, that Trump's nearest national competitors are Rubio and Cruz.

"They're the good debaters," he said.

Culling the field: Meanwhile, Rollins noted, much-ballyhooed candidates who failed to impress in the debates have seen their fortunes decline.

"[Ohio Gov.] John Kasich has probably more knowledge than anyone on the debate stage, but is not a good debate performer, and probably got diminished by that," Rollins said.

Rollins and Anderson both identified Bush as the candidate who's been harmed most by the debates.

"The expectations around him were so high," Anderson told Mic. "He just hasn't had great moments. In many cases, he's clearly the smartest guy on the stage, but the format has just never let him shine."

"The only reason why that you're doing it now is because we're running for the same position and someone has convinced you that attacking me is going to help you," Rubio told a sullen Bush, his onetime mentor.

That putdown wasn't quite fatal. Hoping to stage an upset with a strong performance in the Feb. 9 New Hampshire primary, Bush is still in the race. Not so for Walker, who dropped out after failing to right his sinking campaign's ship at the September debate, or for a handful of candidates who failed to break out of the "undercard" debates: Rick Perry, Lindsey Graham and George Pataki, all of whom have ended their candidacies.

"The early elimination process has clearly been because of the debates," Rollins said. While a strong performance can generate a spate of new fundraising and grassroots interest, a dismal showing makes it considerably harder for struggling campaigns to gain traction.

Not everything: That said, a knockout performance is no guarantee of staying power.

There's no clearer illustration than Fiorina, who surged to second place after the CNN debate but has seen her standing steadily erode since then.

"If you watched Carly Fiorina in debate after debate, she had very polished talking points, but she didn't seem to have much beyond that," Anderson said. "In one sense, that's great — she's on message. But you need to have a next act. Donald Trump is the king of the next act."

Crunch time: Trump's latest act is quintessentially Trumpian. Though foregoing a debate might irreparably damage a conventional political candidate, Anderson said it's far from inconceivable that his decision not to show up Thursday night may well boost his standing.

"Debates actually give his opponents an opportunity to be in the limelight. During debates, Trump is just one of nine voices on the stage," she told Mic. "If his being absent is the big headline, then in a way, he wins."

With the nominating contests so close, GOP strategist and vocal Trump critic Cheri Jacobus argued, the frontrunner's decision is a scheme to forestall any damage from a less-than-stellar debate performance.

"Trump's tenuous hold on the polls shows he just wants to run out the clock on this," Jacobus told Mic.

On balance, the clock has been remarkably kind to Trump. With Trump moving back into the lead in Iowa and crushing the field elsewhere, there are mounting fears among anti-Trump Republicans that the clock may have already been run out. Thursday night's debate gives Trump's opponents one of their few remaining opportunities to show otherwise.