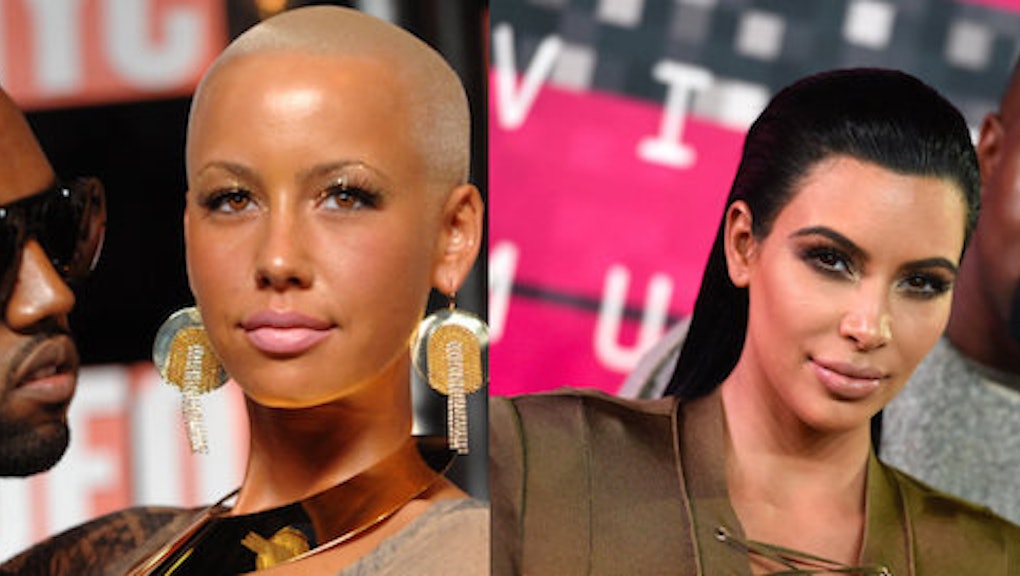 In the midst of one of the most savage Twitter wars between her husband Kanye West and rapper Wiz Khalifa, Kim Kardashian West was busy doing what she does best: self promotion. The social media queen didn't interject after Amber Rose, former love interest to both rappers, tweeted a harsh response to West's offensive attacks on her and Khalifa's child.

Rose penned her problematic response after West blasted Rose in multiple shots toward Khalifa, writing, "You let a stripper trap you," and, "I know you mad every time you look at your child that this girl got you for 18 years."

As someone who must defend the very reason she's famous on multiple occasions, however, Kardashian West should have something to say when a fellow mother is being slut-shamed for her past.

Kardashian West faced offensive questioning about a leaked sex tape featuring her and singer Ray J from nearly a decade ago in major broadcast interviews, including one with Barbara Walters.

"I've made mistakes in my life for sure," the reality star replied when Walters asked if allowing her sexual partner to record them in the act was a "good thing to have done," as she sat with her mother and sisters. Walters went on to say about Kardashian West and her family, to their faces, "You don't really act, you don't sing, you don't dance, you don't have any — forgive me — any talent."

And yet, Kardashian West is easily one of the most successful and diversified entertainers of her generation. With one of the most massive followings across social media, the 35-year-old has launched a successful reality show with her family (not to mention the countless spinoffs), several perfume lines, a book, a wildly successful app created by a leading Silicon Valley startup company, and continues to explore new facets of her ever-expanding career. Her and her sisters' posts on Twitter and Instagram are coveted marketing opportunities for major retail stores, beauty products and waist trainers. Not only that, but her family has the superstar to thank for their fame and extreme upward mobility.

Those who peg Kardashian West as unworthy of her fame should look to her many accomplishments. The same goes for Rose, who has used her time in the spotlight to bring some important issues into the national dialogue, including slut-shaming. In Los Angeles, she held the Amber Rose Slut Walk, where women, fans and activists gathered to protest institutionalized forms of demeaning women and their bodies, from personal experiences to the media.

At the massive event, Rose broke down onstage while discussing the shame both rappers West and Khalifa subjected her to, "Unfortunately, I was extremely slut-shamed, I was called 'nothing but a stripper,'" Rose said in October. "[West said] why would he ever be interested in me, I'm just a bald-head stripper from Philly, I was a gold digger. Apparently he had to take 30 showers after being with me. That's what he said."

Rose also highlighted offensive remarks Khalifa repeatedly made toward her, "[Khalifa] went on to make a song saying that he 'fell in love with a stripper, but fell out of love quicker,'" she said, beginning to cry. "As you can imagine, him being the love of my life, regardless if we're going through a separation or not, that was extremely hurtful ... People are ignorant, and you have to be the bigger person, and be the positive person to forgive and move on and help other people around you that have been through the same thing."

Both Kardashian West and Rose are known by fans for much more than their sexual history. Not only that, but the two have experienced similar career trajectories as fashion icons, celebrities and social media personalities with their fingers on the pulse of the latest trends. One would think the two should share a bond only women who have been subjected to the worst of the media could possibly understand.

Even with West's continued attacks, and his wife's silence on the entire matter, Rose seems to be handling herself well: