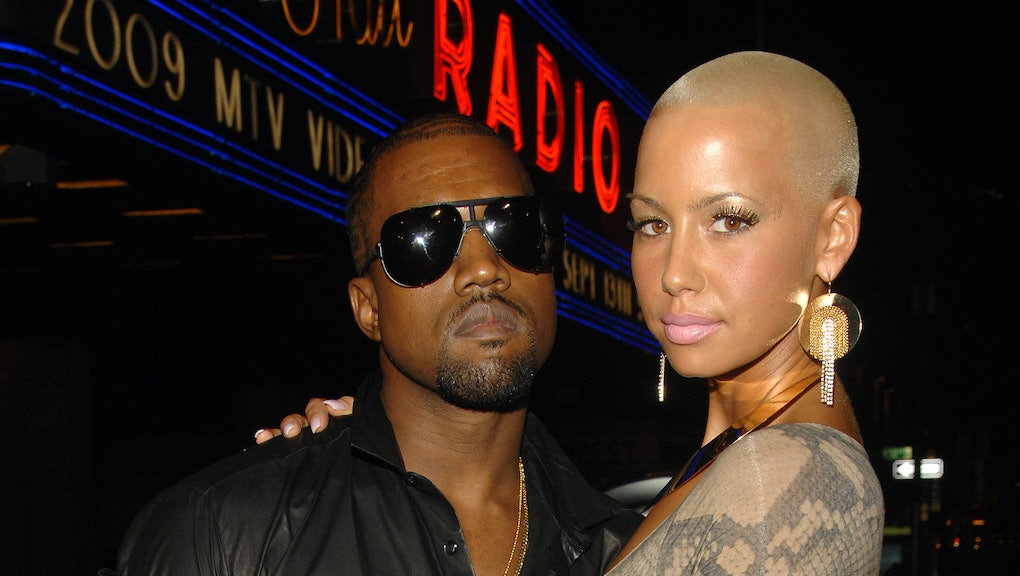 It's been a long time since Kanye West gave the internet a good, honest-to-God Twitter rant. Wednesday, he broke that silence. However, this one wasn't anything like his other harmless and hilarious calls-to-arms over fashion lines or in-app purchases. He was out for Wiz Khalifa's blood but decided to hit the weed worshiper by taking another shot at Khalifa's ex-wife and his own former girlfriend, Amber Rose.

It's not the first example of West's slut-shaming against Rose. Back in February, West said he had to "take like 30 showers before I got with Kim."

Unfortunately, Rose did not take the high road in her response in any way. She fired back with a homophobic line that was as gasp-worthy as it was disappointing.

The words feel so strange coming from the fingers of someone who has built a small movement trying to reduce the stigma of sexual promiscuity. She attempted to shame West for exploring outside of heterosexual norms, with an emoji attempting to add playful insult to injury. Worse, Twitter has reacted to a fact that Kanye may explore different sides of his sexuality as some kind of haymaker in this beef.

The response is yet another example of exactly the kind of homophobia West has been battling ever since he got into the rap game.

West was one of the first outspoken, big-name champions for creating a more LGBTQ-friendly hip-hop. About 10 years ago, during an interview with MTV, he called out the entire culture for using the word "gay" as a stand-in for bad or wack, arguing it helped perpetuate homophobia.

"Everybody in hip-hop discriminates against gay people," he said. "Matter of fact, the exact opposite word of 'hip-hop,' I think, is 'gay.' You play a record and if it's wack, 'That's gay, dog!' And I wanna just come on TV and just tell my rappers, just tell my friends, 'Yo, stop it fam.' If you see something and you don't want to be that because there's such a negative connotation toward it, you try to separate yourself from it so much."

It was a major risk for an unproven rapper, who had already been mocked viciously by other rappers for rocking tight jeans, pink polos and generally not fitting in with hip-hop's well-worn gangsta stylings. It has since become a point of pride for West, who now speaks about it as an example of him bringing open-mindedness and inclusivity back to hip-hop. He rapped about it on 2013's "I Am A God."

"Old niggas mentally still in high school," he spit. "Since the tight jeans they ain't never liked you/ Pink-ass polos with a fuckin' backpack/ But everybody know you brought real rap back."

Considering that the original tenants of hip-hop laid down by rap's godfather Afrika Bambaataa and the pioneering Universal Zulu Nation were "Peace, Love, Unity and Having Fun," West had a point.

One of the sharpest backlashes West faced regarding his fashion choices was back in 2012, when he wore a Givenchy leather kilt onstage during his "12-12-12: The Concert for Sandy Relief" set. Rappers from Cam'ron to Lord Jamar of Brand Nubian all took the rapper to task with Jamar tweeting, "Y'all Cee where the Kanye shit is takin us right? #halfafag."

It shook him a bit at the time. He tried to get pictures of himself wearing the skirt removed from photo agency sites, but he's since become more comfortable with the outfit. "There are warriors that have killed people in kilts in the past," West wrote in a recent essay for Paper magazine. "Who gets to decide what's hard and what's not hard? When I saw this kilt, I liked it. I was into it. It looked fresh to me. I felt creative; I didn't feel limited by some perception."

Who does get to make these calls about authenticity and "hardness" in hip-hop? The best answer is the fans themselves, and they've supported West as well as others who have followed his gender ambiguous fashion and inclusive stances. They've stood by him through public embarrassments and beefs with iconic rappers such as 50 Cent, who called West a "faggot" on his 2009 diss track "Heartless Monster" and encouraged listeners to "kick his fuckin' ass."

Back then, West admitted, "I can't say that it doesn't affect me," in an interview with Bossip. "I was such a fan of 50. It's almost like if a little kid walks up to you at the airport and is like, 'Man, I love you so much,' and then you spit on him. I'm not here to beef with anybody. I'm trying to bring people together."

He may do well to take his 2009 advice now and end the feud while he still has some sympathy from fans drawn to his open-minded approach to the genre. Without Kanye West, hip-hop would likely be a far less queer-friendly place. However, as this beef has shown, there's a lot more work to be done.