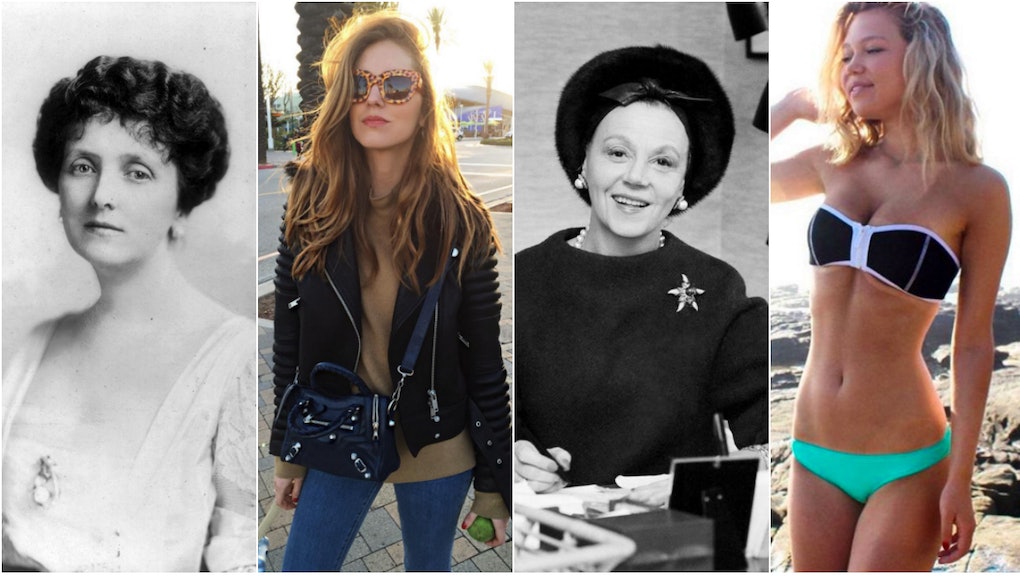 Today's Instagram-Famous Influencers Are the Vintage Socialites We Deserve

In these "like"-obsessed times, the role of social influencer is more relevant than ever. You just can't buy the number of followers a bronzed trainer carrying a watermelon in a bikini has. With those followers comes real perks, and not just in the form of free clothes — enough Instagram followers can earn you cold, hard cash and a place on red carpets. "Influencers," in the parlance of our time, are commanding the type of clout normally reserved for world leaders and famous starlets.

But long before Instagram was even a glint in Silicon Valley's eyes, there were social influencers — they were just called socialites. With their fabulous lifestyles, socialites wielded a substantial influence over the trends of their time. Popularity has always been a numbers game; but instead of boasting followers like the social influencers of today, old-school socialites possessed old money and blue blood.

The Gilded Age, for the period of time roughly spanning 1870 to 1900, saw the rise of socialites as we know them today. They were all women, and they all had a certain social standing based on history: They were mostly daughters of families that came to the United States early on, in the Colonial or even Mayflower era.

"The word 'socialite' used to essentially refer to a social class," Meryl Gordon, the author of Mrs. Astor Regrets, a juicy tale of the decline of the prestigious Astor family, told Mic. "They were very upper class, debutantes of families who might have come over on the Mayflower or had some kind of illustrious pedigree."

This pedigree, combined with the wealth it implied, was what made them so interesting to onlookers. "People wanted to know about the lives of the privileged, specifically because they were privileged," Aja Raden, author of Stoned. Jewelry, Obsession, and How Desire Shapes the World, told Mic.

Being privileged meant a life that revolved around attending parties, dressing beautifully, vacationing lavishly and knowing all the right (read: monied and/or titled) people. Through the power of name and wealth, these women were the trendsetters of their time on matters of style and leisure. "That's what made those girls famous," said Raden.

Today we have similar lifestyle trendsetters — but you don't need to start out pedigreed to get there. You can start simply with a lust-worthy life, showcase that life online and let the money and influence grow from there. Here's how #blessed Insta-famous stars bear striking resemblance to socialites of the past 150 years.

It's not hard for an Instagram celebrity to clear major bank from just one post. For example, 23-year-old fashion blogger and Instagram influencer Danielle Bernstein of We Wore What can make between $5,000 and $15,000 each time she posts about a product. Mobile Media Lab, which partners brands with Instagram influencers for ad campaigns, told Inc its projects tend to range from $10,000 to $100,000, with the 'grammers getting a slice of the earnings.

Most old-school socialites started out with major money without needing the need for lucrative professions. But some also leveraged their positions into careers. Edith Wharton, for example, was part of a "long succession of important names," wrote the New York Times, including "Colonial and Revolutionary ancestors." But she took it upon herself to pursue a career in writing, becoming a best-selling author and winner of the prestigious (and lucrative) Pulitzer Prize.

In the 1940s, socialite Eleanor Lambert used her superior sense of style to capitalize on social currency. With serious PR skills and excellent fashion sense, the "Empress of Seventh Avenue" started both the Council of Fashion Designers of America and the "International Best Dressed List," which brought American fashion into the mainstream. In the more modern realm of socialites, Olivia Palermo has become a Tumblr style icon in her own right.

But Instagrammers like Chiara Ferragni of the Blonde Salad are really the style trailblazers. The 28-year-old Italian has become a global superstar with more than 5 million Instagram followers. Her reach is so broad that brands like Pantene have enlisted her for ad campaigns, a gig typically reserved for celebrities and models. Today's Insta socialites can also use their taste to put trends on the map: Jeanne Grey of the Grey Layers has created a business out of just posting about neutral colors. Yes, neutral colors that have gotten her over 129,000 followers on Instagram.

Money and admiration have always comes with a side of notoriety. Back in the day, magazines like Town Topics began the craze of broadcasting socialites every move. The gossip rag was founded in 1879 and reported on the peccadillos of eminent socialites who wouldn't pay them hush money. It's rumored with heavily contributing to the 1906 dissolution of Emily Post's marriage to then-husband Edwin Post when it reported on his affair with another woman.

Similarly, today's publications are fascinated with the lives of the Instagram elite, dedicating column after column to curiosity about their lives. That can also invite critiques, such as those tossed at Jen Selter, a fitness instructor famous for her Instagram "belfies" who eventually prompted headlines like "We Need To Talk About 'Butt Selfie Queen' Jen Selter."

The pressure that comes with fame

Of course, dedication to these lifestyles isn't always easy. Brenda Diana Duff Frazier was so popular in 1938 that she made the cover of Life magazine based solely on the power of her "lifestyle brand" — she had such a lavish debutante ball that it made her an instant trendsetter. But this didn't necessarily make her a happy woman, admitting in her own writings, "I doubt very much that many girls . . . really enjoy being pushed into social functions. [But when] the honor and fate of the entire family are hanging on the outcome, the tension becomes unbearable."

A similar pressure is felt by today's public influencers. In a post about why she was quitting the social media behemoth, Instagram star Essena O'Neill wrote, "I was both addicted to social approval and terrified no one would value me for myself. So I rewrote the captions of these false photos with short shots of reality."

Of course, some things have changed. Way back when, socialites were up front about their money because, well, you had to have money to be a socialite. Today, it's a lot trickier to find out exactly how much these women are worth (although that doesn't stop us from guessing).

It's also arguably much harder today to maintain that influencer status. Back in the day, women like Huguette Clark were known for keeping small circles and shunning attention, and yet remained very much part of the public conversation. For Instagrammers today, it's publish or perish. As Joy Cho, founder of lifestyle site Oh, Joy! and Instagrammer extraordinaire, explained to Mic previously, it's crucial to post strategically according to certain rules (7 p.m. Pacific is ideal to reach both West Coast and East Coast followers, for example) for maximal attention.

However, today's influencers have a fundamental advantage over their predecessors: power. It's easier than ever to become an influencer, and young women are benefitting in ways some might call empowering. Thanks to "the democratization of attention brought about by the internet," said Aja Raden, "all you need to get through the door is to get someone to pay attention to you."

"All you need to get through the door is to get someone to pay attention to you."

That may sound crass or lamentable, but it means barriers to entry are low and opportunities are high. Sure, you kinda have to be pretty, but that was always the case. No longer does your daddy have to have money — you can build yourself up with just an iPhone and a knowledge of the rule of thirds.

"The old classic line for women of a different era was that your name was supposed to only appear in the newspaper when you were born, when you got married and when you died," Gordon said. "Obviously, we live in an Instagram and Twitter and Facebook world in which getting followers, getting people who are interested in every aspect of your lives, is now the sort of currency.

"It's a much more democratic world. I think that people are more valued for their accomplishments these days than who their parents were or who they married — and that's great for women."