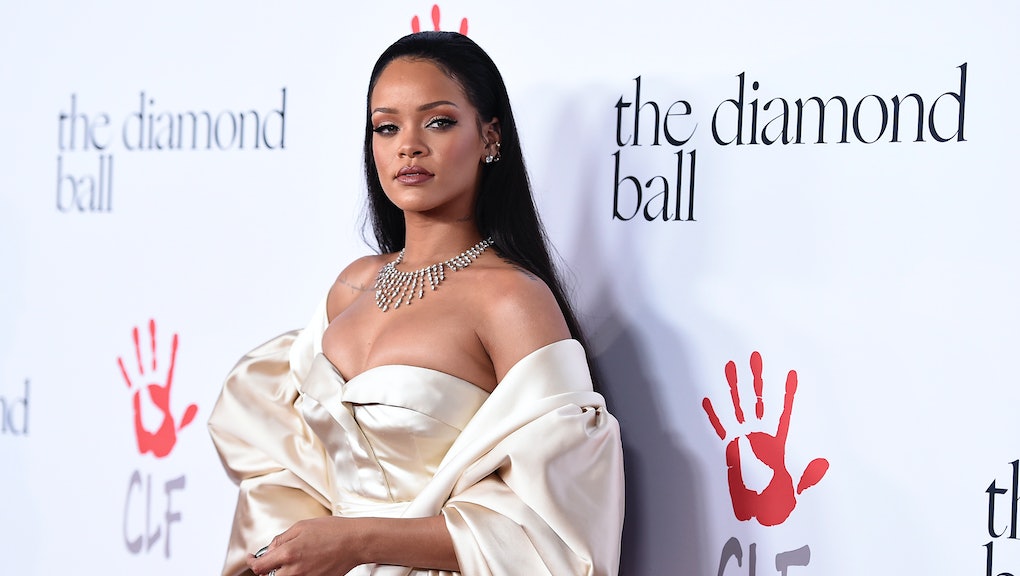 Rihanna's 'Anti' Is for Herself and No One Else

Rihanna's Anti is not for you.

You may enjoy it, of course. Several of us here at Mic do. You may also hate it, think it's unoriginal and a failure as a pop record. You may fall somewhere in the middle and think it's interesting, but not particularly listenable. All of these are valid opinions.

But ultimately, none of them matter. Because Anti is not for you. It is for Rihanna, in concept and in execution.

Much has been made in the lead-up to Anti's release of Rihanna's claim that she wanted to craft a "timeless" album. "I wanted songs that I could perform in 15 years; I wanted an album that I could perform in 15 years," she said. "Not any songs that were burnt out. I find that when I get on stage now, I don't want to perform a lot of my songs because they don't feel like me. So I want to make songs that are timeless."

The key word in that statement is not "timeless," though. It's "want" — "I want," to be more specific. This album is borne of Rihanna's desire to experiment and try something she's never done before. It's why she took three years to craft it, breaking out of her previous album-a-year cycle. It isn't pop, nor was that her goal. No pop album would have a two-minute slow burn, Motown throwback like "Higher" on it. The album is, to put it cutely, Anti-pop.

This has frustrated some fans. Bradley Stern, a pop music writer, was particularly vocal about his disappointment. The album wasn't to his taste, in large part because it wasn't "the kind of music that made us all fans in the first place," as he put it on Twitter.

Stern's disappointment is easy to empathize with — who hasn't been disappointed by an artist they love releasing something they don't like? — but it doesn't rise to the level of critique. It's a valid feeling, but it's akin to saying you're upset there were apples in your office kitchen when there are usually bananas. It may not be what you expected, but art is not about always making what's expected.

To Sterne's credit, after expressing his initial frustrations on Twitter, he elaborated on his feelings about the album in a longer piece. "Going left doesn't necessarily mean the music is better, and none of these sounds are particularly groundbreaking or new — it's just new for Rihanna," Stern wrote. "The Weeknd, Jhene Aiko, Banks, SZA, Tinashe — they've all been doing variations of this (but better)."

This is a fair point. For all of Anti's dynamism, it's not particularly innovative. "Same Ol' Mistakes" is a cover of a Tame Impala song, while album highlight "Love on the Brain" starts with the exact same notes as Beyoncé's "Superpower."

Anti also takes some time to come together, feeling far more cohesive in its last few tracks ("Love on the Brain," "Higher," "Closer to You") than anywhere else on the record. It led to Jon Caramanica of the New York Times calling Anti a "chaotic and scattershot album," while Kevin Fallon of the Daily Beast lamented the album's lack of surefire hits or club tracks.

"For more than three years, fans have been salivating, waiting for those juicy bangers, those dancehall smashes, those songs we won't be able to get out of our heads and won't even want to," Fallon wrote. "There's none of that on Anti."

Again, all these critiques are fair. But Caramanica then goes on to call Anti "not the product of a committed artistic vision." Fallon asks, "Has Rihanna failed us?"

The answer to that question, you can imagine Rihanna saying with blunt in hand, is "Who gives a fuck?"

Sure, as she tweeted, Rihanna is "grateful" that fans have expressed excitement about Anti. It's a "rewarding feeling," she put it, likely because the album has been such a labor of love for her. This isn't Good Girl Gone Bad selling well, or Loud getting an album of the year Grammy nomination. This is Rihanna releasing something she worked at for three years, all the while risking the ire of fans tired of waiting. It is indeed "the product of a committed artistic vision," even if it's not a perfect one. To see any fans excited about that is gratifying. To see other fans disappointed, while a bummer, doesn't take away from what she was trying to do.

Rihanna's Anti is practically a cousin to Beyoncé's 4, or Kelly Clarkson's My December. Each album was its corresponding artist's most pure statement. 4 took Beyoncé years to put together and was basically hit-free (debut single "Run the World (Girls)" only got to No. 29 on the Billboard Hot 100). My December was the result of a very public battle between Clarkson and record executive Clive Davis about the artistic direction. Davis wanted hits; Clarkson won out with a deeply personal album that tanked on the charts.

Anti may tank as well. It's a tough album to sell from a radio or pop perspective. Rihanna knows this, though. Pop success wasn't her goal. There will be another Rihanna album, and it may have tons of hits. Beyoncé released her hugely successful self-titled album after 4, and Clarkson released Stronger after My December. A pop artist like Rihanna doesn't leave that world forever.

But sometimes, a pop artist like Rihanna needs to try something different, even if it's not to her fans' tastes. Anti is not a failure. It's a very creative — and a very personal — success.