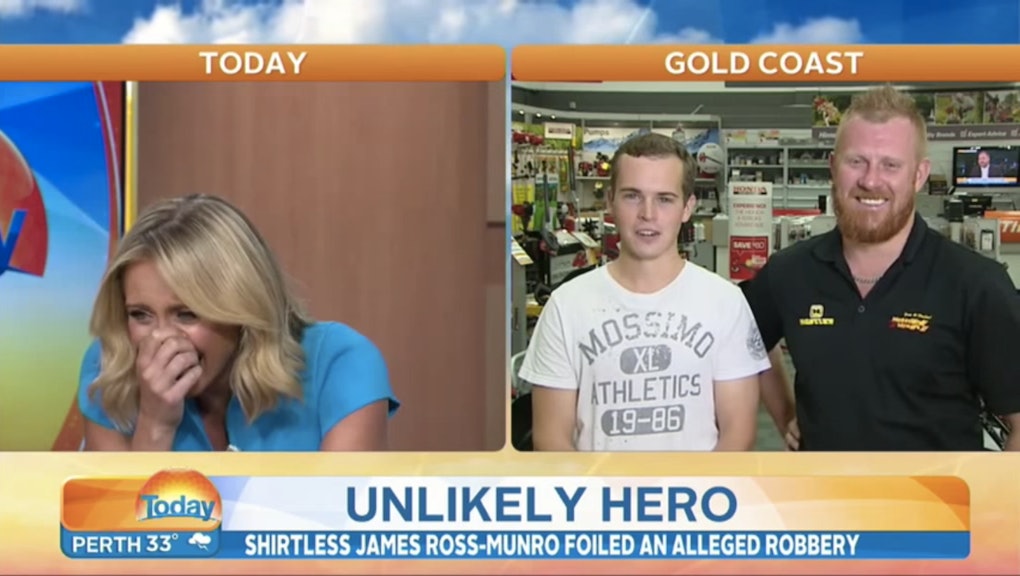 Most of our drunken decisions aren't the best. But here's one that, under different circumstances, could've turned bad fast for two Australian men.

Australians James Ross-Munroe and Kane Wiblen were having a good ol' boozy time in an empty parking lot in Queensland, Australia, when they saw two people robbing a nearby fast food restaurant. On a drunken whim, Ross-Munroe (shirtlessly) ran over to the vehicle idling outside and took the keys out of the ignition. In the video Wiblen took of the incident, there is a brief tussle between his friend and the culprits when the latter attempt to drive off, but Ross-Munroe is persistent: He chases the thieves down the road, foiling the robbery.

Wiblen shouts to Ross-Munroe, laughing, "I got the whole fucking thing on video!" In fact, the video catches Wiblen laughing throughout most of the incident — and the pair kept the laughs going when the hosts of the Australian Today interviewed the local heroes about their Good Samaritan deed.

After they pulled themselves together, host Karl Stefanovic asked Ross-Munroe an important question: "You had your shirt off at the time too which means you're in full manliness. Was there a time that it occurred to you that your life might be in great peril?"

Ross-Munroe told him, "When I first jumped in the car, I sort of took a step back thinking, 'Does the guy have a knife?' But I saw he had his hands empty and he was just trying to cover his face so I jumped back in and just went from there." He added that when he shared the story with his girlfriend she was more worried about his "busted plugger," or flip-flop, than she was for his life.

The two were definitely lucky they came out on top, but there's a chance their luck might have run out if they had tried to thwart a robbery in the U.S., where it's more likely a robber (or anyone, for that matter) could be wielding a gun.

In 1996, 12 days after a deadly massacre in Port Arthur, Australia's passed laws to limit the sale of firearms. Since that time, the number of gun deaths has dropped dramatically. But it would also seem that strict gun control can pave the way for citizens  — drunk and sober alike — to step into the role of good samaritans, as the risks of intervening are vastly diminished.

If Americans want to be laughing as hard as these Aussie bros, it might be time for the U.S. to step up. In the Today interview, the only "guns" mentioned referred to the muscles Ross-Munroe used to wrestle the robbers.