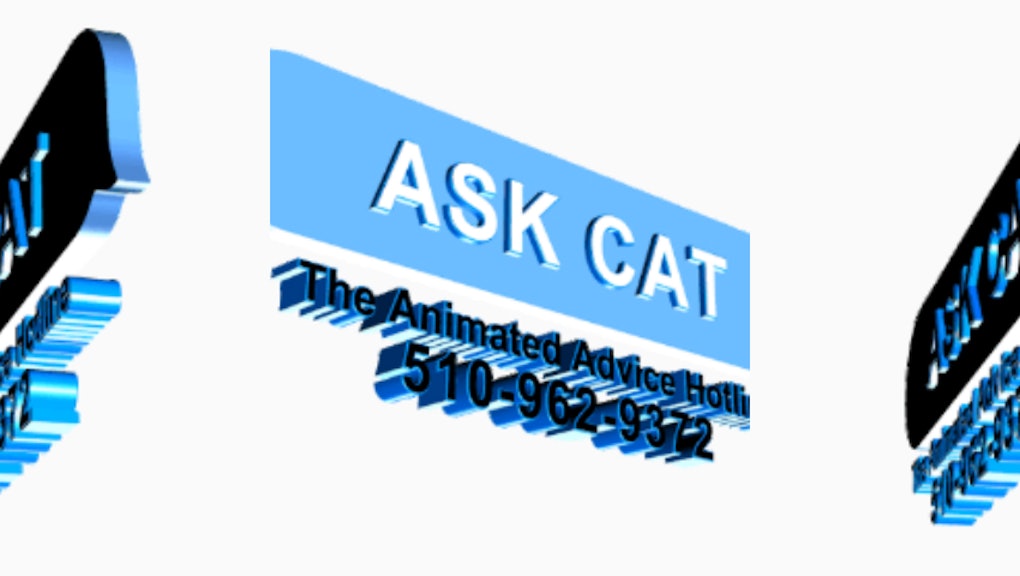 But none of that matters, because it's time to say R.I.P. to all past attempts at advice-slinging and crown newcomer Ask Cat as the reigning queen of the format.

AskCat is a Tumblr that answers readers' anonymous text messages with hypnotizing 3D text GIFs. The Tumblr is positively overflowing with simple life advice that floats, bounces and glistens through space and time.

Ask Cat was created by Catherine Frazier, a 24-year-old textbook designer from California who runs the popular Tumblr AnimatedText, in which she creates retro animated text GIFs by user request. Frazier told Mic that Ask Cat was born after the publishing collective Useless Press took a liking to her work and expressed interest in doing a collaboration.

"I developed the idea for an advice column after seeing the community that was built around AnimatedText and wanted to expand that online/offline relationship," she said. "I've always wanted to use GIFs to communicate with people genuinely. A text message advice column seemed very relevant considering most people use technology to communicate how they feel."

Although the project just launched on Wednesday, Cat has already received hundreds of text messages from followers seeking advice on everything from friendships to whether it's OK to snack on old kale chips to dating to ass-eating.

Based off the initial boom of inquiries, Frazier has already started to see a number of recurring themes haunting the same peoples' lives. (LOL, humans are all basic/the same.)

"I'm surprised at how many people share common problems," she told Mic. "Most of the advice is about money, relationships or if they should follow their dreams."

One slightly darker motif that has emerged is that of people being trapped in unhappy relationships. Frazier said she was floored by "the amount of people who ask me if they should leave their husbands or leave their wives. It's almost as though they've thought about it and just want my permission," albeit in spinning, neon-colored text GIF form.

Indeed, when users submit more serious questions, such as how to come out to one's loved ones, Ask Cat adds more thorough non-GIF answers, which are just as smart and insightful as her GIFs:

For more pearls of wisdom, head over to Ask Cat yourself.